Two U.S. Senators who had endorsed Roy Moore’s candidacy withdrew their support, one day after a Washington Post report alleging that he had pursued teenagers when he was in his thirties.

“Having read the detailed description of the incidents, as well as the response from Judge Moore and his campaign, I can no longer endorse his candidacy for the US Senate,” Lee wrote on Twitter at approximately 6 p.m. E.T.

Daines retweeted Lee’s tweet, and, two minutes later, followed with his own statement. “I am pulling my endorsement and support for Roy Moore for U.S. Senate,” he wrote on Twitter.

The Post reported Thursday that Moore had pursued relationships with four teenage girls when he was in his thirties, which included initiating sexual contact with one girl, who identified herself to the Post as Leigh Corfman, when she was 14 years old.

Another woman, Gloria Thacker Deason, told the Post she had gone on dates with Moore and he had given her wine when she was 18. Moore has denied the allegations, insinuating that the paper was engaging in an attack on his character in an effort to drum up support for his Democratic opponent, Doug Jones.

In an interview with Fox News’ Sean Hannity Friday, Moore denied the allegations, claiming he dated a lot of women after he came back from the military, but does not remember any of them being significantly younger than him. He said he knew Deason and another woman identified in the Post’s report, Debbie Wesson Gibson, although he does not remember romantically pursuing them or going on dates with them.

Moore denied he knew Corfman and that he had engaged in sexual contact with her, alleging that her story was politically motivated.

Cruz and Cornyn have both condemned the allegations in the report — Cruz said Moore should withdraw if the allegations are true — but have not withdrawn their endorsements as of Saturday morning. 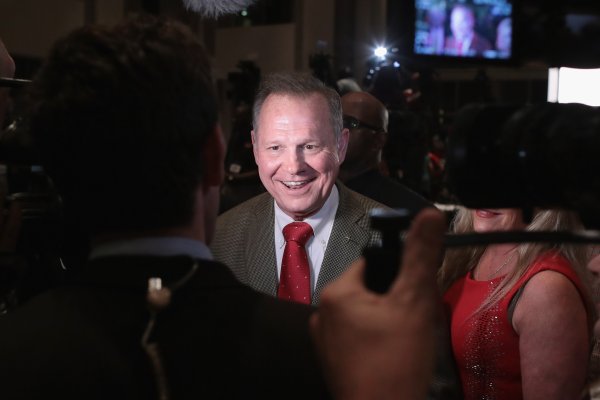