Mad Men creator Matthew Weiner has joined the growing list of high-profile men who have been accused of sexual harassment in recent weeks.

Kater Gordon, a former writer on the popular TV show, said in an interview with The Information on Thursday that Weiner harassed her during a light night in the office. As they were working together, Weiner allegedly told Gordon she owed it to him to let him see her naked.

The experience filled her with “shame” and “regret,” she told The Information.

Gordon, who started on Mad Men as Weiner’s personal assistant and was promoted to writer’s assistant and then staff writer on the show, won an Emmy for Outstanding Writing for a Drama Series in 2009. She shared the award with Weiner.

However, Gordon was let go from Mad Men later in 2009 in a move that caused many questioning headlines wondering why a successful young writer would be cut from the show.

In the interview this week, Gordon said she “froze and tried to brush [the comments] off,” according to IndieWire, but she thought it was a “lose-lose situation.”

“I knew immediately when he crossed the boundary that it was wrong,” Gordon said in the interview. “But I didn’t know then what my options were. Having a script or some sentences cued up as an arsenal — like a self-defense harassment arsenal — I could have used that in that moment, and it would have saved me years of regret that I didn’t handle that situation differently.”

Gordon has not worked in television since leaving Mad Men. She told The Information she believes her experience with Weiner crushed her confidence and that the speculation around her departure followed her. She is now creating a nonprofit to help victims of sexual harassment.

A spokesperson for Weiner directed TIME to a statement given to The Information saying that the Mad Men creator did not remember the alleged interaction with Gordon.

“Mr. Weiner spent eight to ten hours a day writing dialogue aloud with Miss Gordon, who started on Mad Men as his writers assistant. He does not remember saying this comment nor does it reflect a comment he would say to any colleague,” the spokesperson said in the statement. 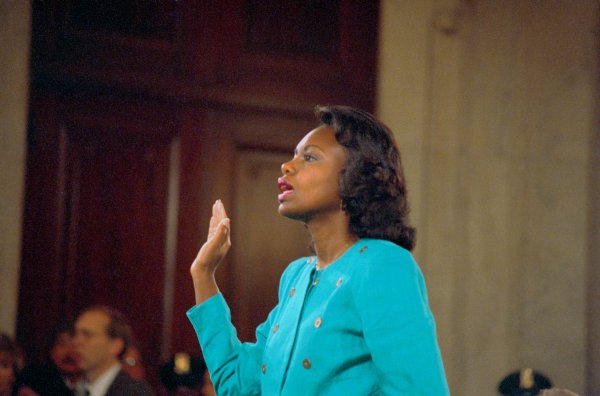 I Helped Anita Hill Testify Against Clarence Thomas. That Hearing Gave Lie to Our Current Reality
Next Up: Editor's Pick