It’s the political promise Republicans can’t seem to admit they will break.

As House Republicans close in on a final version of their package of tax cuts and their Senate brethren unveil their starting point, some in the GOP are still pushing the idea that the party should package the already-heavy lift with a health care overhaul that, to this point, has proven unworkable.

“That’s one of the many things our members are talking about,” House Speaker Paul Ryan said Thursday. “I want to get rid of the individual mandate any way I can.”

Many of Ryan’s colleagues couldn’t help but roll their eyes at that idea. The sarcastic gibe goes like this: By all means, then, lump together the repeal of a central plank of the Affordable Care Act, also known as Obamacare, with the thorny rewrite of the tax code. The scrapping of Obamacare has already failed — twice — in the Senate, but trying it again with even less party unity, in some conservative minds? Got it.

The vote-counting team in the House was scrambling to see if they could pass the tax cuts on their own, and members were two-tracking a second tally to see if there they could get taxes and health care in one bill. If successful, it would be one the biggest legislative feats since Congress passed Obamacare in 2010.

Republicans have promised that they would nix Obamacare if only they were given control of the House, the Senate and the White House. A year after Donald Trump won the presidency, they have nothing to show on the health care front, leaving many conservatives frustrated with the inaction. What is easy to say on the campaign trail is seldom as simple in Congress, especially when roughly one-sixth of the U.S. economy is in play.

Yet, some lawmakers are considering tacking Obamacare onto the taxes and just pass the whole package before leaving for the December recess.

In private pitches, the Obamacare foes rightly note repealing the requirement that everyone have health coverage or pay a fine would free up about $338 billion—a tempting proposition for lawmakers who have to keep the total cost of their work under $1.5 trillion to comply with special budget rules that make these moves possible with just 50 Senators and the Vice President.

The mash-up has several pitfalls, not the least of which is votes. In order to keep the cost under the $1.5 trillion ceiling, drafts of the bill end a provision that allows taxpayers to deduct state and local taxes. That has forced many lawmakers from highly taxed districts in places such as New York, New Jersey and California to balk. Rep. Darrell Issa of California became the latest and most high profile to dismiss the pitch.

Ditching the requirement to have health coverage would, according to the government’s analysis, leave 13 million people uninsured. That makes many lawmakers nervous about the vote from a political perspective. As much as conservatives say they don’t like the law, they also like going to the doctor.

At the same time, the GOP can afford just two defections in the Senate, where Democrats are expected to stand unified against the proposal. Adding Obamacare to the mix is certain to doom it in that upper chamber, where two previous attempts on stand-alone health care bill died.

That, of course, assumes the full Republican conference is available to vote. Sen. Rand Paul of Kentucky is at home recovering from a bizarre assault in his yard. Sen. Thad Cochran of Mississippi has missed quite a bit of work as he recovers from illnesses. Sen. John McCain of Arizona is battling brain cancer. And Sen. Luther Strange of Alabama will be leaving the Senate when voters in his state decide on Dec. 12 whether to elect Republican Roy Moore or Democrat Doug Jones. (And Moore is now facing allegations in the Washington Post, which he denies, that he pursued teen-agers sexually earlier in his career.)

“They couldn’t get Obamacare killed on its own. They’re going to bundle it with tax reform and expect an easier path? What are they smoking?” asked one ally to Senate Majority Leader Mitch McConnell.

But if Republicans don’t do Obamacare now, they will lose that chance to consider it before the new Congress is seated in early 2019. That’s because only bills attached to a budget can pass with 50 votes, and Congress can’t pass more than one budget a year. (In fact, they often can’t even do that.)

So if Republicans want to tell constituents they succeeded in killing Obamacare, it needs to happen alongside taxes. Otherwise, they’re realistically locked out for the rest of this year and next.

For the moment, that seems to be the case. The House’s latest draft does not include anything close to the repeal of the Obamacare mandate. Neither does the Senate’s draft.

That doesn’t mean calls for Obamacare’s repeal are dead. Asked about it Tuesday, McConnell played coy. “We’re taking a hard look at that,” he said.

Correction: The original version of this story misstated which state Sen. Luther Strange represents in Congress. It is Alabama, not Louisiana. 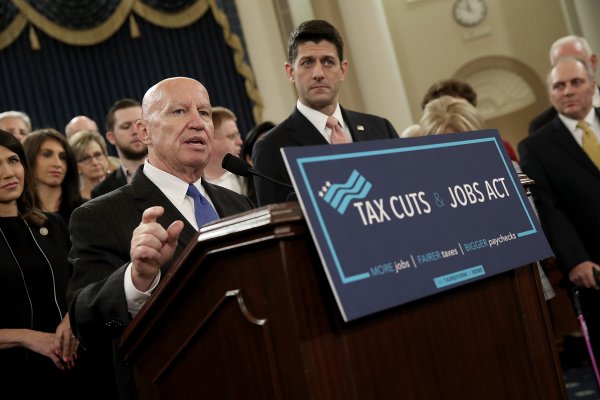