'Disturbing and Disqualifying.' Senate Republicans Call on Roy Moore to Step Aside Amid Allegations

Within an hour of the Washington Post dropping its bombshell report that alleges Alabama Republican Senate candidate Roy Moore initiated a sexual encounter with a 14 year old when he was in his 30s, lawmakers within his own party were calling on him to step down from the race.

As of Thursday afternoon, at least nine Republican Senators called on Moore to step aside, and that number was rapidly growing. Those calling on Moore to leave the race included Senate Majority Leader Mitch McConnell, who had backed Moore’s primary opponent, Senator Luther Strange, and Colorado Senator Cory Gardener, who is chairman of the National Republican Senatorial Committee.

But there’s a catch if this happens. According to Alabama state law, it is too late to remove Moore’s name from the ballot should he or the GOP withdraw his name. Moore’s name will consequently remain on the ballot either way. But if he wins despite withdrawing his name, the election would be voided.

The Alabama Secretary of State John Merrill told TIME that if this happens, the only way Moore’s Democratic opponent Doug Jones, could win the election is if he receives over 50 percent of the vote. Otherwise, the election process would start all over again.

The Republican National Committee did not immediately respond to request for comment and had not issued a public statement. The person who answered the phone at the Alabama GOP office deferred all comments to the Moore campaign.

“If these allegations are true, he must step aside,” McConnell said in a statement Thursday afternoon.

The comment from Utah Senator Mike Lee, who was one of four current Senators to endorse Moore, according to his campaign website, was nearly identical. “If these allegations are true, Roy Moore needs to step down,” said Lee.

Texas Senator Ted Cruz, who also endorsed Moore, called the allegations “serious and troubling,” but said Moore should be given a chance to respond. “If they are true, Judge Moore should immediately withdraw. However, we need to know the truth, and Judge Moore has the right to respond to these accusations,” Cruz said in a statement.

Lee and Cruz’s offices did not immediately respond to follow up questions about what would constitute verification of these allegations.

Alaska Senator Lisa Murkowski also said Moore should step aside if these allegations were true, per her spokeswoman. And Ohio Senator Rob Portman told reporters at the Capitol Thursday, “I think if what we read is true, and people are on the record so I assume it is, then he should step aside.”

Gardner echoed these sentiments, calling the allegations “deeply troubling.“If these allegations are found to be true, Roy Moore must drop out of the Alabama special Senate election,” he said.

Sens. Susan Collins and Jeff Flake took to Twitter to voice their disapproval and urge him to step aside if the allegations are true. John McCain called the allegations “deeply disturbing and disqualifying,” calling on Moore to “immediately step aside.”

Sen. Orrin Hatch’s spokesman, Matt Whitlock, issued a statement on Twitter as well: “If the deeply disturbing allegations in the Washington Post are true, Senator Hatch believes that Judge Moore should step aside immediately,” he wrote.

And Alabama Senator Richard Shelby, according to NBC News, said that if the allegations are true, “I don’t believe there’d be any place for him in the United States Senate.”

The Post interviewed with four women who said Moore had pursued them when they were teenagers and he was in his thirties, including an encounter with Leigh Corfman, who said that when she was 14 Moore had taken off her shirt and pants, undressed himself, and touched her over her bra and underwear before she asked him to take her home.

Moore denied the allegations in a written statement to the Post, calling them “completely false and are a desperate political attack by the National Democrat Party and the Washington Post on this campaign.”

Moore’s campaign issued a subsequent, lengthier statement from the chair Bill Armistead claiming that the Post had purposely written the story to undermine Moore and help his Democratic opponent Doug Jones. “National liberal organizations know their chosen candidate Doug Jones is in a death spiral, and this is their last ditch Hail Mary,” the statement reads. The statement also notes that Moore has been married nearly 33 years and had ran for office before, so it was curious these allegations were only surfacing now.

“After over 40 years of public service, if any of these allegations were true, they would have been made public long before now,” the statement reads.“Judge Roy Moore is winning with a double-digit lead. So it is no surprise, with just over four weeks remaining, in a race for the U.S. Senate with national implications, that the Democratic Party and the country’s most liberal newspaper would come up with a fabrication of this kind.”

Correction: The original version of this story misstated in one instance who was accused of sexually pursuing underage girls. It is Roy Moore, not Luther Strange. 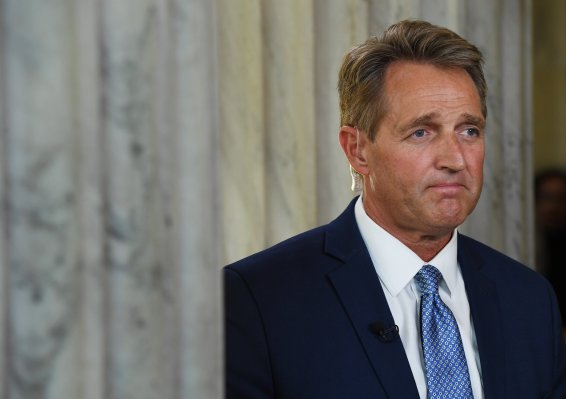