The Resistance Helped Democrats Win on Tuesday. Now They're Turning to 2018

The Democrats’ surprise sweep in the Nov. 7 off-year elections wasn’t just a major victory for the party. It was a triumph months in the making for a network of progressive groups that did not even exist a year ago, but have been toiling to train candidates, boost turnout and energize activists in state and local races.

Flippable, another upstart progressive organization which tries to turn local swing districts blue, sent more than $150,000 to five targeted races in Virginia, where Democrats may have won enough seats, pending recounts, to control the commonwealth’s House of Delegates, where Republicans held a 66-34 majority. Of the 20 races they targeted in Virginia, Washington and Florida, they won 16.

Sister District, which redirects volunteers in safe blue states to assist with competitive races elsewhere, made nearly 19,000 calls and knocked on more than 3,000 doors to help elect Cheryl Turpin, a Virginia House of Delegates candidate from a Trump district. Overall, Sister District won 13 out of the 14 races they targeted.

The lesson, says Run For Something co-founder Amanda Litman, is to compete in every local election you can, because you just might win. “We were working in the districts that nobody else was engaging because they didn’t see them as winnable,” Litman says. She sees the surprise victories in Virginia as a vindication of that strategy. “It means we need to double down, get as big as we possibly can, run as many candidates as possible, and focus on good talent and strong campaigns.”

The successes on Tuesday should give a boost to that strategy. According to Litman, Run For Something normally gets about 10 requests a day from interested young candidates. In the 24 hours since the polls closed in Virginia, she heard from 100 new candidates.

Other organizers see Tuesday’s outcome as a signal to campaign everywhere. “Before yesterday, we might have said, ‘Let’s work on these close states,'” says Flippable CEO Catherine Vaughan. “Now we’re seeing more possibility in states where it seems like the odds are stacked against us.”

Activists are taking the hint. Indivisible, one of the biggest and best-organized groups in the so-called Resistance, announced on Thursday a new plan to transform their well-trained network of anti-Trump advocates into a standing army of volunteers for the 2018 midterms. Their new electoral handbook, Indivisible 435, provides guidelines on how to endorse a candidate and how to help with voter registration. The aim, organizers say, is to transform the oppositional energy that helped defeat the push to repeal the Affordable Care Act (ACA) into a surge of positive momentum going into the 2018 midterms.

“The goal is always to provide that really localized, strategic advice so that our groups can mirror this scale everywhere,” says Maria Urbina, political director of Indivisible. “So regardless of what turf they’re in, they can use these tools.”

There are more than 6,000 Indivisible groups nationwide, with at least two in every congressional district. That means progressive congressional candidates will go into 2018 with at least two well-organized networks of possible volunteers to seek out and tap into. So far, Indivisible is the biggest Resistance group to target all 435 congressional districts instead of picking and choosing winnable races. Its transition from activist group to political machine has already begun: candidates who had started as Indivisible members ran in and won tough local races in Michigan, Connecticut and Virginia.

Indivisible was largely responsible for the well-organized opposition to ACA repeal, which resulted in furious town halls and embarrassing optics for GOP legislators. While GOP representatives could (and did) avoid their angry constituents during the health care debate, it’s a lot harder to hide when you’re running for re-election. Urbina won’t comment on whether Indivisible plans to continue its heckling spree, saying only that “we are holding members accountable.”

Indivisible is hardly the only group attempting to turn activism into votes. The Women’s Convention in October, organized by the same activists that planned January’s Women’s March, featured detailed training sessions to coach people how to get out the vote and run for office. Immigration-rights advocates spent the weekend canvassing for local candidates in Virginia. Organizers hope that if they can turn the wave of anti-Trump activism into voters and door-knockers, they can rebuild the progressive bench.

Which is why, for the groups that have been targeting local elections since last November, Virginia’s blue wave is only the beginning. “It’s a signal to keep going,” says Vaughan. “What we’re doing is working.” 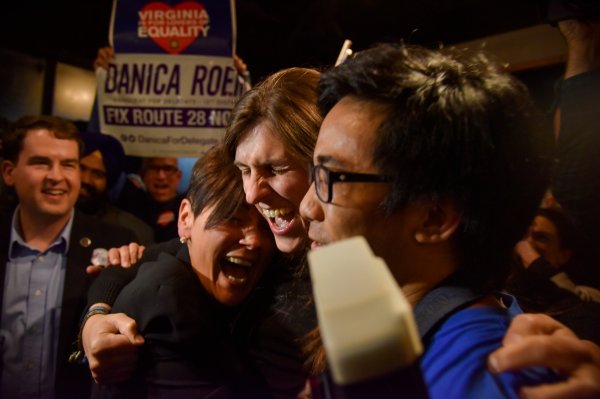 The Resistance Just Proved Its Staying Power
Next Up: Editor's Pick