The Country Music Association Awards took place in Nashville’s Bridgestone Arena on Wednesday night, but there was one star of the genre who never went inside. Sturgill Simpson, Grammy-winning singer-songwriter of A Sailor’s Guide to Earth, instead set up shop outside the venue to busk and broadcast on Facebook Live.

With an open guitar case, a few politically-minded cardboard signs and a guitar, Simpson played music for about 35 minutes while answering questions from passersby and online commenters The signs were a protest of sorts: “I don’t take requests, but I take questions about anything you want to talk about … because fascism sucks,” read one. Another: “Struggling country singer… Anything helps (all donations go to the ACLU). God Bless America.”

(At the end of the set, he said that he made $13 for the ACLU, Rolling Stone reports.)

Simpson was reportedly not invited to the CMAs this year. In the past, he has made incendiary comments about the country music institution, and predicted his own unpopularity in the scene. And while he didn’t get a nod at last year’s awards, his album won the Grammy for Best Country Album in 2016.

Although the CMAs may not be a big fan lately, he has plenty of admirers now for his bold busking move. Inside the show, Garth Brooks was named Entertainer of the Year, the top prize. Chris Stapleton and Miranda Lambert also took home major awards. 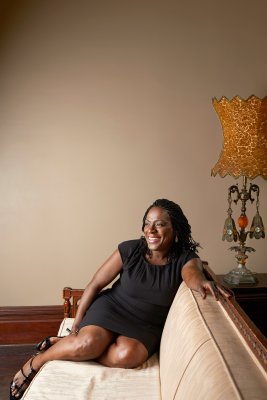 With Soul of a Woman, Sharon Jones Sings One Final Joyful Note
Next Up: Editor's Pick