Voters Deliver a Big Win for Democrats, and a Blow to Trump

The Trump backlash has begun. One year after their stinging defeat, Democrats bounced back in the off-year elections on Nov. 7 with a surprise sweep from coast to coast, delivering an ominous rebuke to an unpopular President and his party.

By resounding margins, Democratic candidates took the marquee gubernatorial races in Virginia and New Jersey. But those triumphs were only the start of a blue wave that crashed across the map. Democrats won control of the Washington state senate and ushered in the first Democratic mayor of Manchester, N.H., in 14 years. They passed progressive ballot measures in Maine and New York; won key local races in Georgia and Florida; and elected a slate of candidates that mirrored the diversity of the party, from Ravi Bhalla, the first Sikh to become a mayor in New Jersey, to Virginia’s Danica Roem, the first person to run and win a legislative seat as an openly transgender individual. “We are taking our country back from Donald Trump, one election at a time,” crowed Tom Perez, the chairman of the Democratic National Committee.

For the beleaguered party, it was the first proof that the anti-Trump fervor that has galvanized the President’s opponents could be channeled into significant election victories. Until this week, despite Trump’s abysmal approval rating and a gridlocked GOP Congress, the opposition had failed to notch a win at the ballot box. Throughout 2017, Democratic candidates running in congressional special elections in red states had narrowed margins but fallen short of victory. Democrats have yet to show they can win in GOP strongholds. But the off-year election wave was a sign that antipathy to the Trump Administration is a force powerful enough to shake the nation in 2018 and beyond.

The election returns reflected surging enthusiasm among college-educated suburbanites, minorities and women. Turnout was up 16% over four years ago in Virginia, where Democrat Ralph Northam, the commonwealth’s lieutenant governor, won an unexpectedly easy nine-point victory over Ed Gillespie, a Republican lobbyist and former national party chairman. The moderate Northam had ended his campaign on a messy note, with progressive organizations denouncing his pledge to sign legislation barring the establishment of so-called “sanctuary cities” that do not enforce federal immigration laws. But just as a divided and rudderless GOP succeeded in the Obama era, the Democrats’ internal dramas may not matter if public opinion keeps cresting in their favor.

The elections also were a testing ground for tactics the left hopes to take national in next year’s midterms. In a bid to rebuild the party’s bench, new grassroots groups like Indivisible, Run for Something, Swing Left and Flippable poured money, volunteers and tech savvy into low-profile contests. Last December, a prosecutor in suburban Seattle named Manka Dhingra, disturbed by the presidential election, attended her first Democratic Party meeting. On Nov. 7, she won a Republican-held seat in the Washington state senate, flipping control of the chamber. She called her win a rejection of “the politics of tribalism, misinformation and mistrust.”

In Virginia, more than 30 different organizations coordinated to contact more than a million voters. The party’s 88 state legislative candidates nearly doubled the previous field. The result–more than a dozen delegate seats flipped from Republican to Democrat–could, pending local recounts, swing the chamber from a Republican supermajority to narrow Democratic control.

It is these down-ballot races that have given Democrats hope of taking back the U.S. House of Representatives with next year’s elections. Republicans had dominated the Virginia House of Delegates in part by drawing legislative maps that aided their candidates. Democrats will have to overcome similar obstacles to defeat congressional incumbents in Republican-friendly territory. That prospect, once improbably, looks brighter now. “For the first time since last November,” one giddy Democratic strategist says, “the sky is above us and the ground is below us.”

Beyond the results themselves were even graver signs for the GOP. Only 40% of Virginia voters said they approved of how the President was doing his job, and 34% said they cast their ballot to send a signal of their opposition. Six in 10 voters said they had an unfavorable view of the Republican Party. Health care was the top issue of Virginia voters, according to exit polls, and those concerned about it overwhelmingly voted for Democrats–a sign that Republicans are taking the blame for their failure to reform the health-care system. In Maine, a ballot measure calling for the expansion of Medicaid won easily, over the objections of the state’s Republican governor and an ugly campaign that cast it as a welfare handout.

Despondent Republicans worry that their predicament may only get worse. They fear that the voters who said Trump needed some time to get his sea legs are beginning to go wobbly on him. Special counsel Robert Mueller’s investigation into Russia’s involvement with the President and his campaign may continue to dog the GOP all the way to the midterms. Strategists are comparing the looming threat to the ethics scandals that hobbled the party in the 2006, helping hand Democrats majorities in the House and Senate. The rage Trump channeled to win the White House doesn’t translate naturally to governing, and lawmakers have struggled to deliver on their promises to an angry base. The challenge is one reason the GOP is seeing a wave of retirements: already 29 current House Republicans and three GOP Senators have left or are leaving their jobs.

All this is especially bad news for the Republicans running in the 23 districts that also supported Hillary Clinton last year. Each of them will have to make the tough call next year of whether to strike the same edgy chords that carried the President into office. For his part, Gillespie, despite his establishment credentials, ran TV ads castigating immigrants for job losses and blaming Hispanic gangs for violence. In the weeks after a white-nationalist march on Charlottesville, Va., erupted in violence, he defended Confederate monuments as the last vestiges of tradition. At the same time, he sought to differentiate himself from the President, rarely uttering his name on the campaign trail. Gillespie learned you can’t be half-pregnant when it comes to the President.

Moments after the loss, Trump weighed in from Asia, blaming the candidate’s defeat on his unwillingness to fully embrace the President and his brand of politics. But if this week’s results are to be believed, there is indeed a Trump effect–and it’s helping the Democrats.

Write to Molly Ball at molly.ball@time.com and Philip Elliott at philip.elliott@time.com. 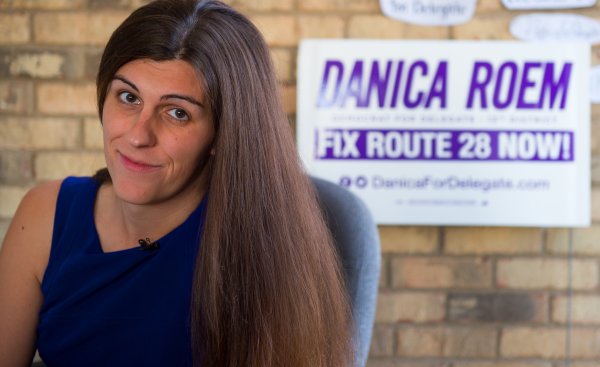 4 Fascinating Election Results You Might Have Missed
Next Up: Editor's Pick