A poster with a portrait of Chinese President Xi Jinping is displayed along a street in Shanghai, China, October 24, 2017.
Aly Song—Reuters
By Ian Bremmer

Since becoming China’s President nearly five years ago, Xi Jinping has used an anticorruption drive to remove 170 ministers and deputy minister–level officials from power, and to punish another 1.34 million lower-ranking Communist Party officials. “Swamp draining with Chinese characteristics” (as opposed to the signature “socialism with Chinese characteristics”) is designed to serve several purposes: to punish genuinely corrupt individuals, to bolster the ruling party’s public image and to sideline real and potential rivals of Xi and his political agenda.

Turkey’s President Recep Tayyip Erdogan has been conducting a purge of his own, which intensified after a failed military coup in July 2016. More than 50,000 Turkish citizens have been arrested; 150,000 have lost their jobs. The purge extends well beyond the army into the courts, the police, the universities and the ruling party itself. Erdogan’s bid to consolidate power continues. We’ve now seen yet another variant of this “anticorruption” push in Saudi Arabia.

I’ve written in the past about a concept I call the “J curve,” a measure of the relationship between a country’s stability and its “openness.” Some countries are politically stable only because the government exercises tight control of the country’s politics, economy and culture by restricting the flow of information available to those who live within its borders. As these countries become more open, as governments loosen their grip, they tend to become less stable.

In years past, Saudi Arabia has avoided political turmoil in this way. Yes, Saudi Arabia is a full participant in the global economy, but its social stability is predicated on subsidies, state jobs and other benefits for Saudi citizens funded by oil sales. As Mohammed bin Salman tries to shift the kingdom from 20th century petrostate to diversified 21st century economy, he knows he needs to shake up Saudi culture by, for example, allowing women to drive so they can contribute to the workforce in greater numbers.

To ensure these and other historic changes don’t produce serious challenges to the country’s stability, the soon-to-be king is purging opponents, real and potential, and firing a loud warning shot at other would-be troublemakers.

And while the purge seems to be popular among Saudis, absent transparency around the cases, it’s hard to gauge just how legitimate an anticorruption push it is. Once upon a time, the U.S. and Europe would champion such anticorruption efforts so long as they were perceived as legitimate and upholding universal liberal democratic values. Not that it seems to matter much to President Trump: “I have great confidence in King Salman and the Crown Prince of Saudi Arabia, they know exactly what they are doing,” he’s already tweeted from Asia. To the Saudis, a wink is as good as a nod. 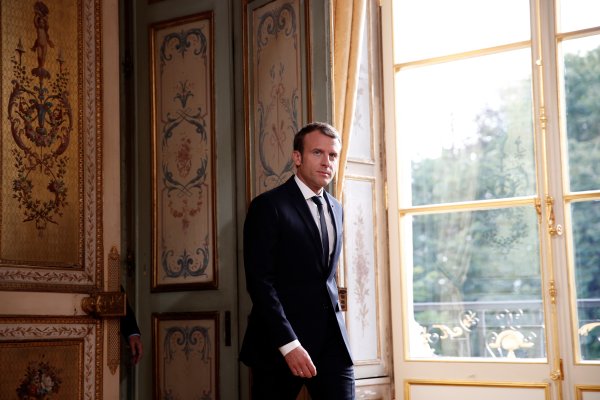 Emmanuel Macron on His Marriage, Trump’s Twitter Habits and the Future of Europe
Next Up: Editor's Pick