'Nobody Needs a Machine Gun.' Sturgill Simpson Speaks His Mind Outside the CMA Awards

Grammy Award-winning singer-songwriter Sturgill Simpson isn’t exactly the favorite son of the country music establishment. Last year, he accused the Academy of Country Music of “hitching their wagon” to Merle Haggard’s legacy after the iconic musician’s death. His much-lauded third album, A Sailor’s Guide to Earth, was snubbed at last year’s Country Music Awards, though it went on to win the Grammy for Best Country Music album and was nominated for Album of the Year.

This year Simpson made a memorable appearance at the annual CMA Award ceremony in Nashville — on the sidewalk outside the arena. With little more than an acoustic guitar and a Facebook livestream, the singer busked for tips that he said would be donated to the American Civil Liberties Union. He also delivered a moving mock acceptance speech that touching on divisive political issues such as gun control, police brutality, LGBT rights and America’s justice system:

“Nobody needs a machine gun. Coming from a guy who owns quite a few guns.”

“Gay people should have the right to be happy and live their life any way they want to, and get married if they want to, without fearing getting drug down the road on a pickup truck. Black people are probably tired of getting shot in the streets, and getting enslaved by the industrial prison complex, and hegemony and racism is alive and well in Nashville, Tennessee. Thank you very much.”

The “performance” was recorded in a Facebook Live video that has already been watched more than 210,000 times, with fans on social media praising the breakout country star’s gumption and calling him “genuinely heroic”:

Simpson also answered fans’ questions, attributing the loss of his signature mustache to laziness while on tour, and revealing that he would perform Haggard’s famous “Are The Good Times Really Over For Good” at the CMA’s — if he ever gets the chance. 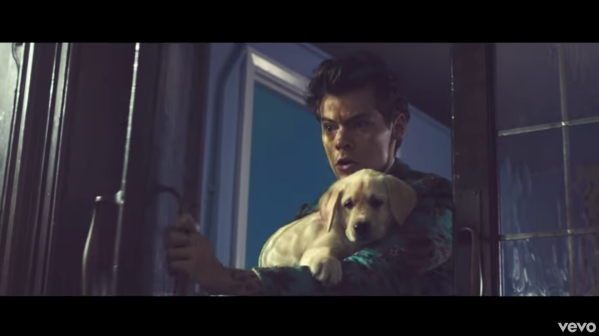