“China can fix this problem easily and quickly,” Trump told a sea of navy blue suits, including executives from General Motors, GE, Goldman Sachs and Cheniere. “I know one thing about your President, if he works on it hard, it will happen.”

“Time is quickly running out, we must act fast, and hopefully China will act faster and more effectively than anyone,” Trump added, also calling on Russia to pitch in with diplomatic and economic pressure.

Speaking at the opening of a bilateral meeting earlier in the day, Xi was less bullish about solving the crisis, though said the leaders of the world’s top two economies had “reached many common understandings,” and that both sides agreed to “enhanced communication and cooperation on the nuclear issue on the Korean peninsula.”

Trump responded by saying, “I do believe there’s a solution to that, as do you.”

The Kim Jong Un regime’s nuclear ambitions are, as expected, dominating discussions between the two leaders. Pyongyang has tested six nuclear bombs and dozens of missiles to date in its bid to reach “military equilibrium” with Washington by creating a nuclear-armed ballistic missile capable of reaching the U.S. mainland.

Speaking to South Korea’s national assembly on the second leg of his 12-day, five-nation Asia-Pacific tour, Trump said the Kim clan had turned North Korea into “a hell that no person deserves.”

Read more: ‘Come to the Table and Make a Deal.’ President Trump Changes His Tune on North Korea

However, the 71-year-old former reality television star was markedly less bombastic the next day in Beijing. On a typically smoggy morning in the Chinese capital, Trump hailed his and Xi’s “great chemistry,” saying, “we are going to do great things for both China and the United States.”

“There can be no more important subject than China-U.S. relations,” Trump told Xi at the start of bilateral meetings. “We have the capacity to solve world problems for many, many years to come.”

China is responsible for 90% of North Korean trade across the shared border, though experts say Xi will never cut off all economic ties as that would risk fomenting the collapse of the Kim regime, which would herald a deleterious influx of refugees and the strategic headache of a united U.S.-allied Korean peninsula ruled from Seoul. Still, Trump said he and Xi are “very much in the same place” on security cooperation regarding North Korea.

Trump also sounded a softer tone on trade, blaming past U.S. administrations for allowing it to get so “out of kilter.” The U.S. has a $350 billion trade deficit with China that Trump has vowed to correct, accusing China during his volcanic campaign of “raping” America and employing predatory trade practices such as currency manipulation.

“But I don’t blame China,” Trump said Thursday, “after all, who can blame a country for taking advantage of another country for the benefit of its citizens.”

Xi had rolled out a “State-visit plus” for Trump, who was greeted at the Great Hall of the People by explosions of cannon fire as the American flag fluttered proudly on one side of a central flower garden, the star-spangled crimson Chinese flag on the other. A line of officers in green, white and blue uniforms stood ramrod straight while the two leaders strolled past the People’s Liberation Army Band, playing “Stars and Stripes Forever,” to greet a jumble of joyous school children.

Speaking to the business community, Xi was keen to highlight the existing economic cooperation between the two superpowers, including the more than 5 million vehicles General Motors, Ford and Fiat-Chrysler have together manufactured and sold last year in China, which he said was more than other parts of the world combined. He also said Chinese investment contributed 140,000 jobs in the U.S. over the same period.

“To keep opening up is our long-term plan,” Xi said, announcing trade deals and agreements on shale gas, liquefied natural gas, industrial cooperation, vehicles, aircraft engines and other commodities worth an unprecedented $250 billion that had apparently been signed during the trip.“We will foster an enabling environment for business communities including the U.S. and other countries,” added Xi.

However, beyond the glitzy outpouring of cash at the ready, analysts doused cold water on suggestions that China was going to radically restructure its state-led economy to allow U.S. firms entry into closed markets. China’s growth stands at a healthy but slowing 6.9%.

“I don’t think there’s any indication that the next five years are going to be significantly different from the first,” says Elizabeth Economy, a China specialist at the Council on Foreign Relations. “This is a leader who believes that the state needs to keep its hand firmly on the levers of the economy.”

According to Andrew Mertha, an expert in Chinese politics at Cornell University, “the immediate optics of the trip might appeal to Trump personally, but China is likely to be acting from a position of power and confidence.” Mertha says the U.S. may appear to be operating under a cloud of confusion, without the usual requisite policy expertise. “These are not good odds for positive, substantive U.S. outcomes moving forward.” 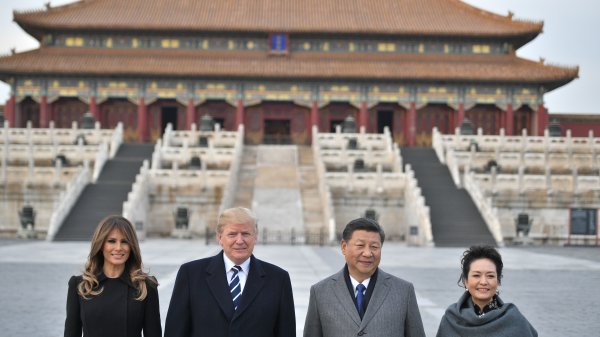