Saudi Arabia pushed war-ravaged Yemen to the brink of the worst famine the world has seen in decades when it closed the country’s ports on Nov. 5. Riyadh sealed all entry via land, air, and sea in retaliation to an intercepted a ballistic missile near the capital, allegedly fired by Yemeni rebels known as the Houthi. The U.N. has warned that the “catastrophic” blockade could endanger the lives of millions of aid-reliant people.

How bad is it?

Seven million people are on the brink of famine, according to the U.N. Yemen depends almost entirely on imports for essential items, but from canceled flights to denied ships, the blockade has halted all humanitarian deliveries of food and medicine. The crisis comes amid the fastest-growing cholera epidemic ever recorded, affecting nearly 900,000 people, according to U.N. figures. With growing scarcity of fuel, prices of diesel and cooking gas are skyrocketing. According to the U.N., fuel prices jumped about 60% overnight as the blockade took effect, while the price of cooking gas doubled.

Why is the aid blocked?

A failed political transition in 2015 plunged Yemen into civil war. On one side is the Yemeni coalition government backed by Saudi Arabia. Houthi rebels, which Iran has backed but denies arming, lead the other. After Saudi Arabia intercepted the missile, Crown Prince Mohammed bin Salman accused Iran of supplying weapons to the Houthis, calling it a “direct military aggression,” in a phone conversation with U.K. foreign secretary Boris Johnson, according to the state-run Saudi Press Agency. The prince added that the measure “may be considered an act of war.” In an apparent effort to halt suspected smuggling of weapons into the country, Saudi Arabia froze the border, with no clarity on how deliveries of humanitarian could proceed.

More than 10,000 people may have been killed since the start of the war, according to the Associated Press. Nearly 50,000 have reportedly been injured throughout the conflict.

What is the international community saying?

Eighteen humanitarian agencies penned a joint letter Wednesday condemning the closure and demanding “that humanitarian operations are allowed to resume immediately.” The group also requested clarity on how long the blockade was intended to be in place; right now it appears indefinite and no aid has entered the country for days.

Doctors Without Borders said in a statement that while the Saudi-led coalition promised to consider “the entry and exit of humanitarian supplies and crews,” the organization has not been allowed flights into the country for more than three days. “Access for humanitarian personnel and cargo into Yemen is essential to deliver desperately needed assistance to a population already severely affected by more than two and a half years of conflict,” said Justin Armstrong, MSF head of mission in Yemen.

Read more: Half a Million People in Yemen Had Cholera in 2017. That’s the Worst Outbreak Ever Recorded in a Single Year

A spokesperson for the U.N. Office for the Coordination of Humanitarian Affairs, Jens Laerke, called the blockade “catastrophic,” warning that millions of people are only being kept alive by humanitarian assistance, which has suddenly vanished. “That lifeline has to be kept open and it is absolutely essential that the operation of the United Nations Humanitarian Air Service (UNHAS) be allowed to continue unhindered,” Laerke said. 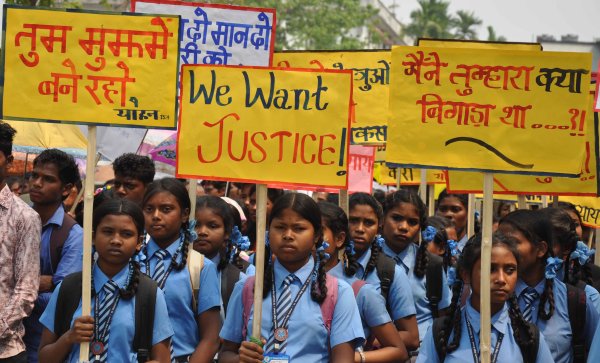 Life Behind Bars for Man Who Raped an Elderly Nun
Next Up: Editor's Pick