Rye Barcott thinks veterans can be a key part of the answer to Washington’s problems. On Thursday, the former marine and his team will officially launch WithHonor, a political organization that will support “next generation veterans,” those who served after the Sept. 11, 2001 terrorist attacks, as they seek higher office.

WithHonor is looking to spend $30 million dollars helping between 25 and 35 veterans from across the political spectrum in competitive House races across the country during the 2018 election cycle. The group has not endorsed any candidates yet, but Barcott says they’ve already begun tracking some 100 former service members who are preparing for contests.

The number of veterans serving in Congress has declined steadily since the 1970s, when veterans made up around three-quarters of all members. Now, just over 19% of the legislative body is made up of former servicemembers. That’s not to say that veterans aren’t running for — and winning — higher office. According to Military Times, the number of younger veterans has risen steadily since 2006. After the 2016 contest, 26% of freshman House members serving in the 115th Congress were veterans of the wars in Iraq and Afghanistan, according to an analysis by Veterans Campaign.

From Barcott’s perspective, one of the personnel problems facing our current Congress is the lack of veterans in office: “the level of dysfunctions is near a record high, while the percentage of veterans of Congress is also near record low in U.S.” He says veterans’ experiences serving the country and working with others comes in handy when they’re crafting tough legislation or trying to rally support for a bill.

“That matters, especially when you’re working on hard problems, to have that type of camaraderie and be able to still get a beer together even if you might disagree on a particular item,” he says. “Even if you’re battling it out on the floor you can still respect each other and appreciate each other’s company.”

“The military is a school of the nation,” author and veteran J.D. Vance said in a statement. ” I served with Marines from all walks of life, and that experience working together on missions that matter made us better. It’s part of the reason why I think veterans are a key to turning our country around and uniting us.”

Beyond just finding former service-members to support as they run for office, which is the focus of a number of groups including Veterans Campaign, Barcott says WithHonor is evaluating the “character” of potential candidates and asking them to commit to a set of values: including a pledge to return contributions from donors that could “taint” the candidate’s integrity and publicly reject or ask for the removal of ads that “lie or baselessly attack” their opponent’s character. The candidates would also vow to co-sponsor at least one major piece of bipartisan legislation a year and regularly meet with members of the opposing party.

It’s a steep ask in the current climate, on the heels of a particularly nasty gubernatorial contest in Virginia and as lawmakers work through a tax reform plan that has been structured so it could pass without Democratic support. Barcott concedes that the pledge took some workshopping, but says he thinks the American ultimately people want less vitriol and more geniality from candidates and lawmakers. “I think Americans are really hungry for a positive message,” he says.

Time will tell if it works. The group hopes to begin supporting candidates during primaries and throughout the general election, should they succeed. Their short-term goal is to hopefully usher in a caucus of new lawmakers who can work across the aisle to get things done. In the long term, they want to encourage and support more civic-minded veterans up and down the ballot. 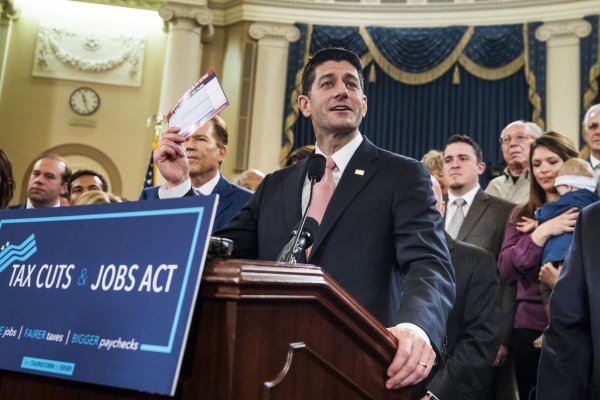 How Would the Republican Tax Plan Affect You? Find Out With This Simple Calculator
Next Up: Editor's Pick