The headlines on Wednesday morning were all about Democrat Ralph Northam’s victory in the closely watched Virginia gubernatorial race.

But that wasn’t the only story from Election Night. In fact, it wasn’t even the most interesting story.

In local elections across the country on Nov. 7, a number of candidates won in campaigns that featured compelling twists and interesting firsts. Here’s a quick rundown of some of the election stories you might have missed.

Democrat Danica Roem beat Republican Del. Bob Marshall for a seat in the Virginia House of Delegates, becoming the first openly transgender person elected to a state legislature. Marshall, who once referred to himself as the state’s “chief homophobe,” sponsored a bill to restrict which bathrooms transgender people can use, wrote a constitutional amendment to define marriage as between a man and a woman, and sponsored a bill to bar gay people from openly serving in the Virginia National Guard. He also used male pronouns to refer to Roem on the campaign trail. After her victory when Roem was asked about Marshall she simply responded, “I don’t attack my constituents. Bob is my constituent now.”

In January, New Jersey politician John Carman shared a sexist meme about the Women’s March in Washington which asked if the march be “over in time for them to cook dinner.” Less than one year later, he was defeated for his second term as Atlantic County freeholder by a woman who was upset by his comment, 32-year-old first-time candidate Ashley Bennett.

A victim of gun violence beat an NRA-backed candidate

Former TV anchor Chris Hurst’s girlfriend was fatally shot on live television two years ago. He wants to reduce gun violence, and on Tuesday, he beat an incumbent backed by the NRA for a seat in the Virginia House. Though Hurst was quick to note that his wasn’t a single-issue campaign: “We really have not been focused on gun violence in this race at all,” he told CNN. “This race has been more about education, more about expanding Medicaid.”

Democrats usually win in Philadelphia. But people were still nervous about Larry Krasner’s chances at district attorney, Philadelphia Magazine reports: he’s a civil rights attorney who has represented Black Lives Matter and Occupy Philly. He’s sued the police department and City Hall more than 75 times, according to Philadelphia Magazine, and he’s promised never to pursue the death penalty. But his brand of progressivism still won out: he beat the Republican candidate 74 percent to 26 percent.

And there were a whole bunch of historic firsts 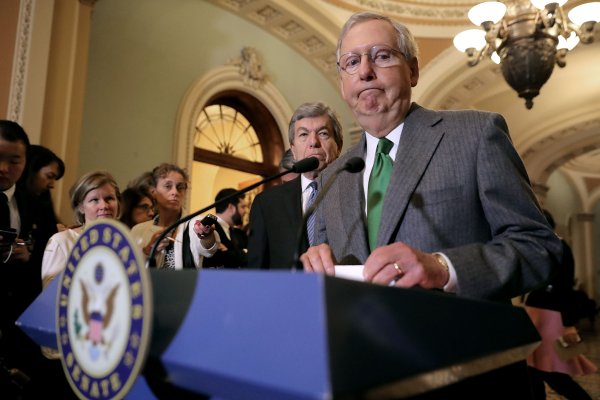 Republican Tax Plan Will Hike Deficit By $1.7 Trillion
Next Up: Editor's Pick