Late night hosts have a lot to say about President Trump’s hiring practices.

On Tuesday’s The Late Show, Stephen Colbert focused on the decision by Trump’s Palm Beach resort Mar-a-Lago to hire foreign workers instead of looking for U.S. employees, which he saw as a sign of the President’s hypocrisy.

“Mar-a-Lago has been granted what’s known as H-2B visas, and to get them, Mar-a-Lago ‘had to show that no one else wanted the jobs,’ including ‘calling old employees and putting ads in the newspaper,’” Colbert said. “They also posted the job online with You’re Going to Be Working for a Monster.com.”

Colbert went on to say that Mar-a-Lago had the “incentive to make the jobs look bad to American workers,” which they did by noting there “no tips” and “applicants had to ‘apply by fax”.” Colbert joked that Mar-A-Lago could have made the job even less appealing by saying: “‘Dead-end job, slave wages, must apply via telegram, high probability of meeting Donald Trump.’”

Meyers focused on Trump’s hiring practices within his administration, specifically his decision to appoint Sam Clovis to the Department of Agriculture for the job of chief scientist within the department —even though Clovis is not in fact a scientist.

“Clovis is one example of what seems to be a pattern in the type of people Trump nominates and hires: The only qualification necessary is loyalty to Trump himself. And nowhere is that perhaps more blatantly obvious than at the U.S.D.A.,” said Meyers. “ According to reports, the Trump team has brought into the agency ‘a long-haul truck driver, a clerk at AT&T, a gas-company meter reader, a country-club cabana attendant, a Republican National Committee intern and the owner of a scented-candle company.’ That doesn’t sound like the leadership of a government agency, it sounds like the cast of Survivor or like you’re assembling a team for a [expletive] bank heist.”

Watch both full clips below. 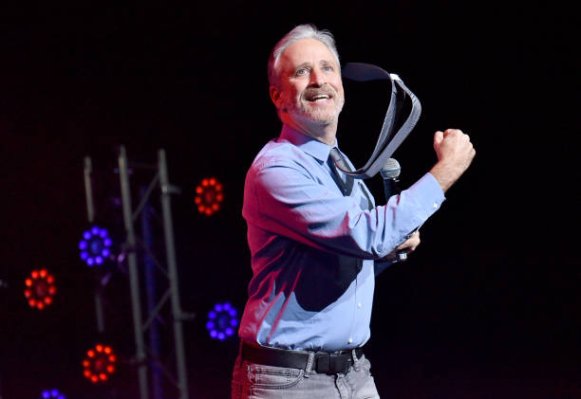 Jon Stewart, John Oliver and More Roast Trump at Annual Stand Up for Heroes Benefit
Next Up: Editor's Pick