Stop Telling Women We Need to Be Saved From Our Sexuality

I fell in love with my high school boyfriend Andy at a youth group party. He was funny and smart and weird and handsome and he had his own car, a red VW Rabbit. I say all these things as if they’re the reason I fell for him, and I suppose they played a part. But the number one reason was this: He liked me. I was chubby and socially awkward, and he wanted to make out with me anyhow. That he was actually a pretty good guy was icing on the cake.

And he was a pretty good guy. It took many years for me to realize how lucky I’d been. If he’d been manipulative or abusive, I would have been an easy victim. Not just because I was so grateful for his attentions, but ironically, because the very rules and norms that were supposed to keep me safe were actually making me more vulnerable.

So much of the way women’s sexuality is policed is done in the name of keeping us out of harm’s way. Victim-blamers love telling women to keep our knees closed and our hemlines long if we don’t want to be raped. Most national sororities forbid their chapters from hosting parties at which alcohol is served. (This rule has the unintended effect of forcing sisters to socialize only in places where they’re someone else’s guests and have less control over the tone and direction of the partying.) Abstinence “educators” shame sexual women under the guise of protecting us from getting “used” by men.

It was only marginally more subtle in my house. Boys and sex were essentially forbidden. My sister and I were allowed to date only under strict rules, and couldn’t go to a party if our parents couldn’t call the parents of the kid hosting the party first. As you might imagine, we didn’t get invited to many parties.

I have no doubt that my parents had these rules in place for what they thought was our protection. In reality, though, what they were doing was locking me into an isolation chamber. When I started being sexual, there was no one I could talk with about any of it. My few friends were the kind of “good girls” my parents approved of — maybe they were doing their own sneaking around as well, but that idea never occurred to me at the time, and it certainly would’ve been a huge risk to guess who I could out myself to. There wasn’t even an online world to connect with back then. There was no Rookie, no Scarleteen.com. There was only Andy to confide in. If he had meant to harm or control me, I would’ve been in his thrall.

Today, there are so many more things for worried grownups to “protect” teen girls from when it comes to sex, and just as many ways that “protection” can backfire. We can all agree, for example, that teen sexting has led to some terrible outcomes. But the solution is not to “rescue” teen girls from their perfectly normal impulses to send sexy pictures to their boyfriends, both because there’s nothing wrong with teens expressing their sexuality, and also because it’s unlikely to cause harm — one study found that more than three quarters of 18-year-olds who’d sent a naked picture to someone said that nothing bad had come from it. It was the 12% of girls who’d been pressured into sexting who were overwhelmingly likely to suffer for it. What girls need isn’t to stop consensually sexting, it’s for boys to stop trading their intimate images like playing cards and coercing them into sharing photos they don’t want to share in the first place.

Often it’s women who perpetuate these safety myths, genuinely believing they are helping other women. Last month, actor Mayim Bialik wrote an essay for the New York Times asserting that dressing modestly had protected her from the Harvey Weinsteins of her industry. She was rightly criticized by many for suggesting that women who are more maximalist about their sexual expression are to blame for the ways others abuse them — but largely absent from that conversation was acknowledgment of the cost of that kind of modesty-as-protective-shield messaging to girls who receive it, even if no one assaults them. “I felt like I was interested in sex, but also there was something super dangerous and bad about my body that I had to be constantly guarding myself against,” Tamar, an acquaintance, told me in an interview. She went to an Orthodox Jewish high school where she was forced to take a year-long class on women’s modesty. Even now, a decade later, wearing clothes that leave her arms bare makes her anxious. Dyondra Wilson, a black woman I interviewed, said she grew up “with a big booty” and was also constantly told to cover up for her own good. “Even if they didn’t intentionally try to hurt me, it made me feel self-conscious about who I was,” she said. “It’s led to self-doubt and self hatred.”

Not everyone who claims “harm reduction” as a reason to control women’s sexuality has such pure motives. In October, when President Donald Trump’s administration made it legal again for employers to refuse to provide insurance coverage for birth control, they claimed the policy change was because birth control access could “affect risky sexual behavior in a negative way.” That’s just false — the research is pretty conclusive that access to birth control doesn’t increase sexual risks, or even sexual activity, of any kind.

Whatever the motive, propaganda promoting women’s sexual vulnerability is almost always bludgeoning someone. In the rare instances where men are blamed, the myth of white women’s fragile femininity is often used as an excuse for oppressing black and brown men. That the Trump administration highlighted special efforts to track gender-based violence by “foreign nationals” in an executive order (a category which comprises a tiny fraction of all the gender-based violence in the U.S.) while working to defund the Violence Against Women Act speaks volumes about this dynamic. This custom of justifying racism in the name of white women has a long and terrible history in the U.S., including the countless lynchings of black men who were called “rapists,” when the worst “crime” they may have committed was having consensual sex with a willing partner.

Even more often, the rescue narrative pits vulnerable, “deserving” women against some “other” kind of woman, as when the specter of cisgender women being raped is used to bar transgender women from using women’s bathrooms. There’s no evidence that predators use the existence of trans women as an alibi to get into women’s restrooms, and there’s nothing stopping a man intent on finding a target from walking in. In fact, it’s trans women who are most vulnerable to violence. In a study, almost 70% of transgender people reported harassment and 10% reported physical assault in gender-segregated bathroom situations — forcing them into restrooms full of men certainly isn’t making them safer. And if you look into the records of the politicians most invested in telling trans people where they can and can’t pee, you won’t find a history of anti-rape leadership. To the contrary: conservative lawmakers who are so concerned for cis women’s safety when it comes to persecuting trans women are often the same ones handwaving away concerns about rape when they don’t suit political purposes. Mike Pence, who as governor of Indiana opposed the Obama administration’s efforts to let trans students across the country use the bathrooms of their choice, is now the second-in-command to a man accused by more than a dozen women of sexual misconduct. (President Trump denies the claims.) Attorney General Jeff Sessions, who successfully lobbied Trump to reverse those Obama-era efforts to protect trans students, went so far as to argue that grabbing a woman by her private parts without her consent doesn’t constitute sexual assault (he later changed his tune, saying it does).

Being sexual comes with risks. But we don’t, as a rule, try to warn boys off of it because something bad might happen. It’s all well and good to equip young people, whatever their gender, with the information they need to make their own decisions about sex. But next time you feel yourself tempted to tell a girl what she should or shouldn’t do with her body “for her own good,” stop and ask yourself first: By trying to save her, are you really making her safer?

Adapted from Unscrewed: Women, Sex, Power, and How to Stop Letting the System Screw Us All by Jaclyn Friedman. Copyright © 2017. Available from Seal Press, an imprint of Perseus Books, LLC, a subsidiary of Hachette Book Group, Inc. All rights reserved. 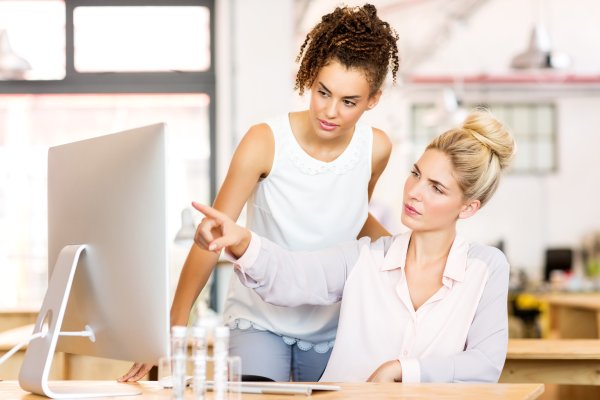 How to Deal If Your Boss Shuts Down Your Ideas
Next Up: Editor's Pick