Can Trumpism Survive Without Donald Trump?

In his ads, Ed Gillespie hit all the same notes as Donald Trump. He argued that his Democratic opponent was soft on MS-13, a brutal gang with origins in Central America. He criticized sanctuary cities, even though Virginia doesn’t have any. He argued for keeping up Confederate monuments.

But unlike Trump, he lost.

In a race closely watched by Democratic and Republican operatives from across the country, the former Republican National Committee chairman spent millions on ads that sounded Trumpist themes of the risks of immigration and the need to protect America’s heritage.

But Democrat Ralph Northam, the state’s not-particularly-inspiring lieutenant governor, roundly defeated Gillespie, 54 to 45 percent, as Democrats rode a wave of victories in other statewide offices and the state’s House of Delegates.

The nation’s foremost expert on all things Trump, one Donald J. Trump of New York City, had an explanation: Gillespie just wasn’t Trumpy enough. Taking advantage of Twitter’s new 280-character maximum, the president of the United States explained Tuesday night that Gillespie “did not embrace me or what I stand for.”

It’s somewhat true that Gillespie did not embrace Trump. The president did not campaign for the Republican gubernatorial candidate in Virginia, even though it’s a short drive from the White House, making him the first president since Richard Nixon not to do so. And Gillespie missed other opportunities to play up his connections, even as the president tweeted his praise.

But he more than embraced what Trump stands for, as evidenced by his campaign ads.

There’s another explanation. Trump was the ultimate outsider: a reality TV personality and billionaire developer who had never run for office or served in an elected position who pledged to “drain the swamp.” Gillespie was a creature of the swamp, a former party official who advised George W. Bush and Mitt Romney, worked as a lobbyist and ran unsuccessfully for Senate.

When Trump attacks MS-13, voters hear a guy who launched his campaign by going off-script to argue that Mexico is sending rapists to the United States. When Gillespie attacked, it was clear he was singing from a borrowed hymnal.

And then there’s the views of political scientists. For all its history as the heart of the Confederacy, Virginia is a state whose demographics are trending blue. Trump’s approval rating is lower than any modern president. And Virginia has tended to vote for governors from the opposite party of the incumbent president in recent years. Maybe a loss was baked in.

All of these explanations hold some truth to them, but most of them are not good news for Donald Trump.

If Trumpism only works with Trump on the ticket, the president is going to find his Republican allies thinning out.

If Trumpism only works when the candidate is a true believer, the president may find there aren’t enough people who fit the bill and have the wherewithal to win a race. (That’s one reason former Trump advisor Steve Bannon’s potential picks for 2018 included several wealthy people who could self-fund.)

And if Trumpism is subject to the usual rules of politics — something Trump managed to evade in his unlikely 2016 campaign — then the president will find his party losing seats in the upcoming midterm elections.

There were other signs on Election Night that Trump could be in trouble.

Elsewhere in Virginia, Democrat Danica Roem defeated the state’s most socially conservative lawmaker, Del. Robert G. Marshall, to become one of the first openly transgender elected officials in the U.S.

The win was doubly sweet for LGBT advocates, as Marshall was the author of a failed bathroom bill, once called himself the state’s “chief homophobe” and referred to Roem using male pronouns.

That could be bad news for Trump, who has taken moves to bar transgender troops from serving in the military.

In New Jersey, Democrat Phil Murphy decisively defeated Republican Lt. Gov. Kim Guadagno, second-in-command to Trump’s erstwhile ally, Chris Christie, in a campaign in which he called on the blue state to turn an even deeper shade of blue.

A one-time Goldman Sachs executive who has never held elected office before, Murphy advocated for legalizing marijuana, raising the minimum wage to $15 and fighting the Trump Administration. Basically every part of the preceding sentence is bad news for Trumpism.

In Maine, voters overwhelmingly approved a referendum to expand Medicaid under terms set by the Affordable Care Act, a move that Republican Gov. Paul LePage vetoed five different times. That’s not a positive sign for Trump, who vowed to repeal Obamacare as president.

And while each of these races can be explained away by local factors, the accumulation of results matters. Democrats have already begun citing Tuesday’s results to prospective 2018 candidates, while more Republican incumbents may be looking to join their colleagues who have already exited stage right. 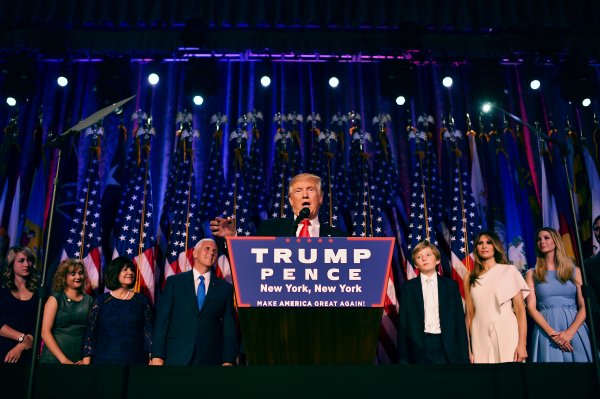