'We Need to Clean Up Our Democracy.' Former DNC Chair Donna Brazile on Her New Tell-All Book

Donna Brazile doesn’t care if you hate her book.

In fact, the longtime Democratic insider hopes you’re a bit uncomfortable with the publication of “Hacks: The Inside Story of the Break-ins and Breakdowns That Put Donald Trump in the White House,” released Tuesday.

In the book, Brazile describes a deeply dysfunctional Democratic National Committee, Russia’s theft of DNC emails and a miserable 2016 election that refuses to go away. Full of snark and shade, it has already become appointment reading for Washington.

Brazile spoke on Tuesday with TIME about her time as interim DNC chairwoman, the future of her party and the fierce criticism she faces for releasing the book now, right at the one-year anniversary of Clinton’s loss. This is a lightly edited transcript.

How are you holding up?
I’m doing good. I didn’t suspect I would get such a reaction from what I like to call my former colleagues. I recognize that any book that would question not just some of the tactics and tones but the strategy would get an ample response.

Who knew a political memoir could break through?
I thought the Clinton campaign would do a post-mortem and the election analysis since they controlled so much of the resources. I thought they would work with the [Democratic Congressional Campaign Committee] and the [Democratic Senatorial Campaign Committee] and others to give a frank account to the rank-and-file of what happened. When I conducted the last DNC meeting before the election of new officers down in Atlanta, I bought in (super PAC chief) Guy Cecil because (Clinton campaign manager) Robby (Mook) wasn’t ready yet. So maybe Robby will be ready at some point to give his own post-mortem. Many others have presented theirs. You can add mine to the number of other post-mortems.

Why hasn’t there been a proper autopsy?

I wanted that. I requested that. The Wisconsin state party chair requested it. I put it on the table. I went to Robby on numerous occasions and asked for a post-mortem. He said the time wasn’t right. He was going to work on it. He was doing it. I got calls from reporters. I went back to Robby. I said, “Robby, people are still requesting it.”

The problem with the DNC doing it is that the DNC did not run its operations because of what I call the cancer, the [memorandum of understanding], the joint-fundraising agreement. We did not control the victory fund money.

If you said to me, “Madam Chair, how much money did you spend in Virginia in 2016?” I don’t know. I’d have to go back and consult with them because they had the [Hillary Victory Fund] money. I did not control the resources for the battleground states. It’s hard for me to do an autopsy because I don’t know what the polling or the data said.

All I know is the hacking that we experienced in the DNC, the discord we dealt with the hacked-stolen emails and the disruption that caused. I can only speak to what I know. I cannot speak to what they know.

Going back to what you call the cancer, the joint-fundraising agreement, doesn’t this happen every four years? What made this one different?

It was the addendum to the joint-fundraising agreement. I’m a former campaign manager. I was an officer of the Democratic Party. I didn’t learn about it until I kept getting blocked from hiring staff or trying to terminate people to right what I found was wrong at the DNC when I came in. When I found out, I felt obligated to go and tell Bernie (Sanders): “Here’s the cancer. I’m not killing the patient.”

So was it rigged?

I just don’t like the word rigged because states control the primaries, not the DNC. The voting was not rigged. The independence of the DNC was jeopardized and that was wrong. The word I use is cancer because what I found in the separate document between the Clinton campaign and the DNC was a form of cancer. The control that the Clinton camp had over the DNC made it difficult for me to do my job as chair.

Did the agreement change the outcome of the nomination fight?

As you know, in the months that follow a presidential cycle, the rules and bylaws committee reconvenes to look at the procedure from the 2012 campaign and then we use that procedure to begin to draw upon those lessons for 2016

I still believe Bernie ran a hell of a campaign. He ran against the Establishment inside the Democratic Party as well as outside the Democratic Party. He ran a campaign based on the great principles that Democrats believe in: giving everyone a fair chance, making college more affordable. He ran on a single-payer system. He ran a very energetic campaign. He brought new people to the party. I think his message that Democrats heard was to open the party up, to allow more non-Democrats to get involved.

Is Bernie the future of the party?

I don’t know. Not since 2000 have I worked on a political campaign. I’m not ready to tell you who I’m going to work for in 2020. Right now, I would hope the party would continue to make gains and strengthen the internal dynamics of the party so we can go out there in 2018 and beyond to represent the future and what the country wants.

Why are you writing this book, and why now?

When I left my position as chair, I was quite frustrated with what I call the pace of change. I spent much of 2016, at least the part when I was chair, trying to get reporters and the American people to understand that we were attacked. I started writing columns. I wanted to put as much information out there as possible. I felt something was missing. I came to the month of May and I’m, like, “We’re still without a PM? We’re still without a full analysis of what happened?” I decided I would look inside the party and say, “OK, here’s what happened.” I want to learn and pass along the lessons of 2016. We need to learn from last year. The rank-and-file Democrats need to know what happened, what the party has been doing in their name, with their votes and with their money. That’s what I wrote the book.

I wrote a book after the 2000 campaign, called “Cooking With Grease.” I tell my friends up at Harvard: Every time the winner of the popular vote loses the Electoral College, I get to come to Harvard. Every time this happens, I get to write a book.

At 57, I don’t know how much gas I have left in my tank. I’m the person who is often called to come and clean up the mess. This time, I wasn’t just willing to clean up what I found on the surface. I went deep. I went way deep.

I know there are many of my friends who will never have me over for Thanksgiving now. To them I say this: I’d much rather a seat at the table when I know everybody can be included, rather than to come into a room that is not clean and needs of some disinfecting.

Knowing what you know now, would you have taken the DNC job?

About three months before I became interim chair, I got a job offer to work for a big, big, big corporation. It was a great job, paying seven figures. I’ll never forget, when I told the CEO of that company that I wanted to put a woman in the White House: “Once that’s done, I’ll be able to come and finally get a job outside of politics.”

I have no regrets. I support Hillary. I wanted Hillary to win. I wanted her to defeat Donald Trump. I wanted to see a woman in the White House. I also wanted to make it very clear there are seats for everybody at the table, not just those who have been in the process all of their adult lives. 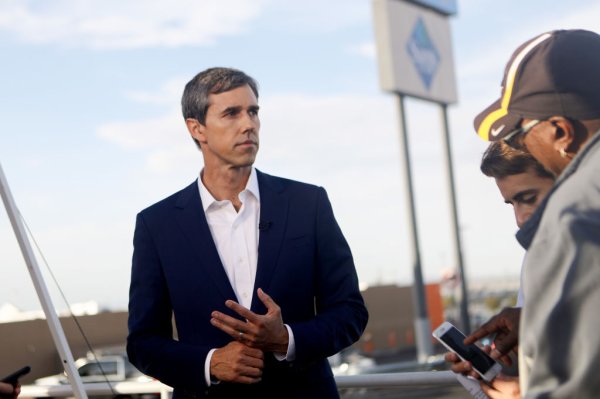 Democrats Blame Trump in Blunt Language for Mass Shooting in El Paso
Next Up: Editor's Pick