Waiting For Gun Control After the Texas Shooting? Don't Hold Your Breath

It’s been five weeks since the mass shooting in Las Vegas, the worst in U.S. history, and little has changed. A brief conversation about banning bump stocks — the devices used by Las Vegas shooter Stephen Paddock that allow semiautomatic rifles to essentially function as automatics — fell out of the headlines and nothing was done.

Now, in the wake of another grisly shooting, which left 26 dead in a Texas church on Sunday, those in the Republican-controlled Congress who support stricter gun control — Democrats, namely — are bitterly cynical about the prospect of change.

“It just strikes me that we see tragedy after tragedy and no action because of the power of the [National Rifle Association],” Democratic Sen. Tammy Baldwin of Wisconsin told TIME while waiting for the Senate subway on Tuesday. “It’s just heartbreaking.”

It is very nearly certain that no comprehensive gun control legislation will surface in Congress in the aftermath of Sunday’s shooting. When measures are proposed in the wake of mass shootings, they tend to be partial and patchwork: efforts that target one marginal component of firearm safety that relates specifically to the tragedy that just transpired. After Las Vegas, it was bump stocks. Now, after the massacre at the First Baptist Church in Sutherland Springs, Republican lawmakers are saying they would be open to repairs to the federal background check system, noting that the shooter, 26-year-old former Air Force member Devin Patrick Kelley, might not have been able to buy a gun had the Air Force properly noted his domestic violence conviction in the national background check database. (One convicted of domestic violence cannot lawfully possess a firearm.)

“I believe that there’s an opportunity here to work together on a bipartisan basis to come up with a way to address this solution to a very real problem,” Senate Majority Whip John Cornyn of Texas told reporters on Tuesday. Cornyn has introduced a bill that would “incentivize” federal agencies to upload criminal conviction records into the background database. “There’s enormous problems with the background check system. That’s one of the areas of consensus on a very contentious topic.”

But recent history suggests that doing so will not prove a particularly high legislative priority. After the Las Vegas shooting, Sen. Dianne Feinstein, the California Democrat who has long been a vocal supporter of gun control, introduced a bill that would ban the sale and use of bump stocks. That was a month ago. Though several Republicans have criticized bump stocks, even writing to the Bureau of Alcohol, Tobacco, Firearms and Explosives to inquire why they were legal, they have not pressed the matter.

Republican Sen. Chuck Grassley, the Iowa Republican who chairs the Senate Judiciary Committee, told Politico on Monday that he would soon convene a hearing on the matter of bump stocks, but that it had not been finalized.

Senate Republican leadership could not offer any more specifics on Tuesday. “I think that hearing will occur,” Cornyn said. He also declined to say whether he would support Feinstein’s bill, saying the current moment was “premature.”

On Tuesday, NPR reported the Texas-based gun accessory vendor Slide Fire would resume its sale of bump stocks on its online store after indefinitely suspending them after last month’s shooting. 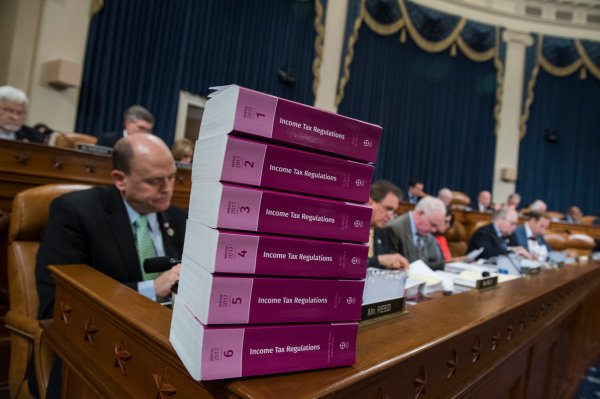 Republicans Want to Pass Tax Reform By Thanksgiving
Next Up: Editor's Pick