I Survived 2 Terrorist Attacks on 2 Continents. They Changed Who I Am

Author and survivor Mason Wells
Ideas
By Mason Wells
Wells is the author of Left Standing.

The last thing I expected when I entered the Brussels Airport on March 22, 2016, was to be peppered with deadly shrapnel.

When the first suicide bomb detonated, I stood in absolute shock, as my world suddenly exploded with pain, fear and uncertainty; the force of the blast catapulted me away from my otherwise blissful reality into an uncertain realm in which death was an imminent threat.

As the fire and flames in front of me dissipated and the smoke began to clear, I focused all of my energy on running out of the airport, despite facing dire injuries, including third-degree burns, numerous lacerations, a cracked heel bone and a ruptured Achilles tendon.

The horrific scenario was unfortunately all too familiar to me, as the Brussels Airport attack wasn’t my first brush with terror. I also survived the Boston marathon bombing in 2013.

It’s still pretty shocking to consider that I was a victim of two separate attacks. And in between those two attacks, I was living in Calais, France, when Spencer Stone, Anthony Sadler and Alek Skarlatos subdued an alleged terrorist carrying an assault rifle on a Thalys train. The incident hit close to home, as we used those high-speed trains weekly to travel from one city to another.

By the time I turned 19, I had witnessed the Boston marathon bombing, had been injured in the Brussels airport bombing, and had seen two cities that I frequented, Brussels and Paris, hit by multiple ISIS attacks. These experiences reshaped me. I will carry horrific memories from Brussels and Boston with me for the rest of my life. The smells, the emotions, the casualties — they aren’t the kinds of things that you can just force yourself to forget.

I still find myself wrestling with the effects. A torrent of questions assaulted my soul in the wake of the attack: Why did this happen to me? Why would someone slaughter civilians so unforgivingly? What was my future going to become? Would I ever be who I once was? What if this happened again? How am I going to get past this? While I was recovering from the Brussels attack, I would wake up on my hospital bed in the middle of the night to gunshots, only to find that they were a figment of my memory.

Each time this happened I still found myself checking where I had been shot in my dream — a confirmation that it was just an illusion from my troubled mind. Over the course of my two-month-long stay in the hospital, this cycle of lucid dreams repeated itself.

Several months after my release I began studying engineering at the University of Utah and the stress of college coursework redirected a lot of my energy. Over time, the nightmares began to fade. But the memories lingered, and they began to exhibit themselves in troublesome ways.

When I was driving out on the road I began to imagine all of the ways in which I could die in a car wreck. Whenever I pulled up to an intersection, my mind ran through every possible thing that could go wrong as I crossed. When I was at the mall with my brother or on a date, my mind would picture what would happen if suddenly somebody was there with a gun or a knife.

I was constantly running scenarios through my head — how I would react, what I would do, where I would go. The memories of what happened to me were draining and my mind was often moving at a mile a minute.

It was during these moments that I came to terms with three fundamental truths: Having strength is a choice, being happy is a choice and becoming who we want to become is a choice. There were often so many reasons to become angry and embrace hatred. After all, someone had tried to kill me. But every day I told myself that I would overcome it all. That meant working hard to do so.

During my second semester of college, I found myself working in Washington, D.C., in my congressman’s office. I took the metro to and from work every day, another member of one of the country’s busiest morning commutes. Going from one station to another, packed in tight like sardines, trying to hold breakfast and read the newspaper at the same time—while I had overcome a lot of my fears and trauma in the previous months, I was still uncomfortable in areas with large groups of people.

The frequent advertisements on D.C. metro platforms reminding passengers to look out for unidentified bags didn’t ease my mind either. Each time I boarded a metro car I would move towards one end of the car to position myself as close as possible to the door — in my head I was imagining all of the horrible things that would happen if suddenly a bomb went off.

I did my best to fend off those kinds of thoughts, to push them away and fill my mind with something else. Sometimes I was successful, other times I was not. Through it all, though, I kept reminding myself that I could and would overcome the trauma those terrorists inflicted.

It has been a long but fruitful process. It’s been 18 months since that fatal day in the airport, and I still occasionally grapple with my scars. But I have also found peace and purpose. During the hardest parts of my recovery I always reminded myself that my future is what I make it, and that I had a choice as to whether I would be a victim or a survivor.

Today, as I sit writing this piece in the school of my dreams, the United States Naval Academy, I can assure you that I chose to be a survivor. It was a tangible choice that I made. It was a choice to embrace optimism, confront my problems and trust in a higher power.

No matter what we go through, we always have a choice as to how we will respond. Our lives are what we choose to make of them, and by choosing to act we can take our lives further than we ever imagined.

Mason Wells is now a midshipman at the United States Naval Academy, where he is studying engineering and is the author of Left Standing. 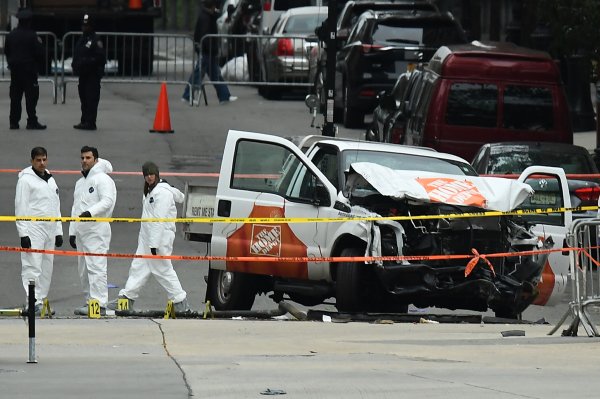 Why We Shouldn't Exaggerate the Scale of Terrorism
Next Up: Editor's Pick