'Come to the Table and Make a Deal.' President Trump Changes His Tune on North Korea

Hundreds of protesters shouting “No Trump! No War!” and brandishing white flags daubed with fake blood thronged central Seoul upon the arrival of Donald Trump in South Korea Tuesday, though in a departure from his previous threats of “fire and fury” against the regime of North Korean despot Kim Jong Un, the U.S. President indicated he was open to dialogue with Pyongyang, saying, “ultimately it will all work out.”

“I really believe it makes sense for North Korea to come to the table and make a deal that’s good for the people of the North Korea and the people of the world,” Trump told journalists following bilateral meetings with South Korean President Moon Jae-in. However, he added that, “The United States stands prepared to defend itself with the full range of our military capabilities if need be,” trumpeting the “billions of dollars” of military equipment that he said South Korea will be ordering from the U.S. “We cannot let North Korea threaten all that we have built,” Trump said, calling for China and Russia to put more pressure on Pyongyang.

The more measured tone on the second stop of Trump’s 12-day, five-nation Asian tour differed from a Monday press conference with Japanese Prime Minister Shinzo Abe in Tokyo, where Trump insisted a military option remains on the table and that “the era of strategic patience is over.” Abe agreed that “there is no point in dialogue for dialogue’s sake” in the race to stop Kim’s escalating missile and nuclear tests.

However, in Japan Trump did carefully distinguish between ordinary North Koreans, whom he called “great people,” and the “very repressive regime” in Pyongyang. That is a pertinent distinction for Moon, the son of refugees from the North, who returned the liberals to power in South Korea by pledging to both put pressure on and restart dialogue with the North.

Trump’s threats to “totally destroy” North Korea undercut Moon’s campaign promises to restart family reunions and foster rapprochement across the DMZ, the demilitarized zone that cuts across the peninsula. While Japanese Prime Minister Abe has invested a great deal of political capital in building a strong personal relationship with Trump, Moon has been more circumspect, pledging “to say no to the Americans if necessary.” In return, Trump has previously accused Moon of “appeasement.”

But on home turf, Moon lavished Trump with all the pomp and flattery of which he is so fond, welcoming the former reality television star at the presidential Blue House with a full regalia of flag-bearers in traditional Korean dress and local children fluttering the Stars and Stripes. He even broke with protocol by meeting Trump’s plane at Camp Humphreys, a U.S. military base 40 miles south of Seoul, an honor no U.S. president has received before.

There are 28,500 American troops in South Korea, and the relationship between Washington and Seoul is of crucial importance given that Japan’s pacifist constitution currently precludes it from taking a more active role in defense matters. (Though Japanese Prime Minister Abe is desperate to change that.) The U.S., South Korean and Australian navies held joint drills off the Korean peninsular Monday and Tuesday in actions that Pyongyang deems a dress rehearsal for invasion. More drills involving three U.S. strike groups are due to begin soon in a massive show of force.

Still, demonstrators both for and against Trump’s aggressive approach to North Korea faced off in central Seoul on Tuesday. The anti-Trump demonstrators shouted “We hate Trump!,” and “No THAAD,” referring to the U.S. anti-missile system that South Korea hosts.

“We ask Trump to get rid of THAAD and talk to North Korea without any preconditions,” said mom-of-two Yesug Kim, 52, an NGO worker from Seoul staging a sit-in by Seoul’s regal Gwanghwamun Square. “The U.S.-South Korea military exercise should be stopped and North Korea should stop testing nuclear weapons: a freeze for freeze,” she added, referring to a diplomatic solution backed by China but rejected by Washington and Seoul.

However, another bank of protesters separated by riot police held aloft the American flag, brandishing banners that said “We Pray for You, Mr Trump,” and, “We urge the United States to conduct an immediate preemptive strike on North Korea.” The Star-Spangled Banner was played at top volume, and photos put on display thanking America for its help in the 1950-53 Korean War. Pro-Trump hawks are a raucous minority, however; more than three-quarters of South Korean respondents to a recent Pew poll consider Trump “dangerous.”

Other than pledging to purchase military hardware, Moon told reporters that he was removing the payload limit on South Korean missiles, and ramping up U.S. naval rotations. However, last week he also agreed with Chinese President Xi Jinping not to accept any more THAAD batteries, whose enhanced surveillance capabilities Beijing deems an affront. That represents a blow for Trump’s efforts to ramp up missile defenses. On Monday, Trump sent a budget request to Capitol Hill for $4 billion to support “additional efforts to detect, defeat, and defend against any North Korean use of ballistic missiles against the United States, its deployed forces, allies, or partners.”

Moon will be hoping that Trump strikes a measured tone in his speech to South Korean lawmakers on Wednesday. “Trump has a real opportunity in his speech at the national assembly to completely shoot down dialogue and call it ‘appeasement’ again, or he can recognize that it will probably have to be part of the solution, but just not now,” says Prof. John Delury, a East Asia expert at Yonsei University in Seoul.

Most of all, Moon will want Trump to refrain from taunting the 33-year-old tyrant Kim Jong Un, whom he has previously mocked as “Little Rocket Man” on Twitter. The 38 North analysis group reports new activity by North Korean nuclear test sites, while South Korean intelligence says the regime may be preparing another rocket launch soon.

Trump also brought up the subject of trade, thanking his host for agreeing to renegotiate the Korean-U.S. Free trade agreement, or KORUS — which he had previously called “horrible” — once again striking a softer chord. “I feel confident,” Trump said, “that we will be able to reach a free, fair and reciprocal trade deal.” 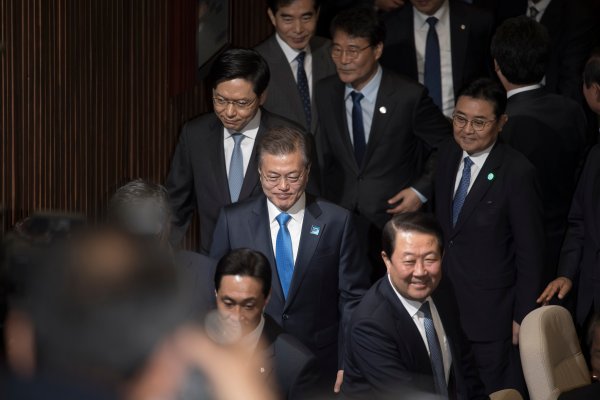 South Korea Will Not 'Tolerate or Recognize' Nuclear North
Next Up: Editor's Pick