President Donald Trump has requested an additional $4 billion to enhance U.S. missile defense to counter the threat of North Korea, hours before he landed Tuesday in Seoul for his first visit since taking office.

“This request supports additional efforts to detect, defeat, and defend against any North Korean use of ballistic missiles against the United States, its deployed forces, allies, or partners,” Trump said in a letter to Congress. “Providing for the safety and security of the American people is my top priority,” he concluded.

Submitted while on a 12-day tour in Asia, his first trip to the region as commander-in-chief, Trump’s appeal underscored his administration’s attempts to address the “urgent” threat of North Korea’s progress toward developing a nuclear-tipped intercontinental ballistic missile, or ICBM, capable of reaching the U.S.

The Trump administration initially requested $9.9 billion for missile defense in the 2018 fiscal year, which some lawmakers dismissed as too low. But following a series of provocative missile tests this summer, the president pledged to increase defense spending “by many billions of dollars,” reports CNN.

The additional funding outlined in the budget amendment would provide for construction of a ground base interceptor field in Alaska and 50 Terminal High Altitude Area Defense (THAAD) interceptors.

Trump also appealed for $1.2 billion toward the administration’s South Asia strategy — which includes sending thousands more troops to Afghanistan — and $0.7 billion for repairing Navy ships recently damaged in fatal collisions. The president further called on Congress to act on an earlier request of $1.6 billion to be allocated to the Department of Homeland Security for the construction of a border wall separating the U.S. from Mexico, one of Trump’s core campaign promises. 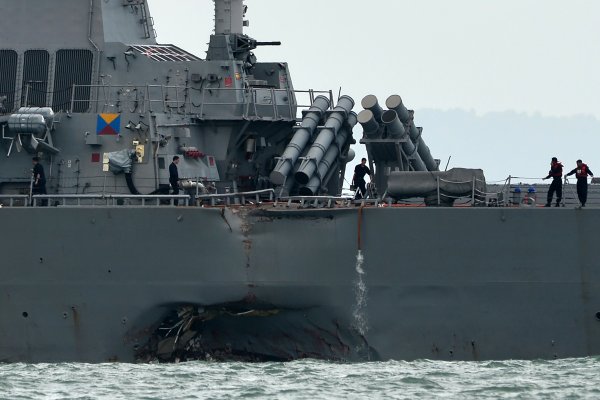 The Navy Says Deadly Collisions in Pacific Were 'Avoidable'
Next Up: Editor's Pick