Twitter's User Growth Is Slowing Because It's Not Great for Conversations

Traders get to work during Twitter Inc.'s IPO on the floor of the New York Stock Exchange in New York Nov. 7, 2013.
Brendan McDermid—Reuters
By Alex Fitzpatrick

Why the drop-off in users? Twitter’s well-documented high barrier to entry is certainly a big reason for that. It’s just too difficult for some newbies to learn how to use the platform, pick accounts to follow and get the hang of the customs and inside jokes with which hardcore users are familiar. On Wednesday’s earnings call, Twitter CEO Dick Costolo acknowledged its difficulty problem and said the company’s working on improvements that’ll roll out this year.

But there’s another, more ironic factor at play here, too. When Twitter was first born as “twttr,” it was designed as a hack around SMS-based group text messaging: Early twttr users could send a text message to a single number and it would be automatically broadcast via SMS (Short Messaging Service — basically, text messages) to all the twttr users who were following the sender. While Twitter users can still tweet via text message, the platform has grown exponentially more complex than that to the point where many people don’t even consider that original use case a valid way to use the site anymore.

And therein lies the problem: People still want simple, cross-platform group messaging that ducks the cost of sending international SMS messages, as evidenced by group messaging app WhatsApp’s skyrocketing growth over the past year or so. Cellphone operating system designers are, to the frustration of many users, fans of walling their messaging systems off from rivals: Apple’s got iMessage, Android has Google Hangouts and BlackBerry has BBM. Ever try to have a group chat when some people have iPhones and others are on Android? It’s not a very easy proposition but one solved by cross-platform apps like WhatsApp.

Twitter, though, could’ve been that app, if it only stuck closer to its group-communication roots while it evolved over the last several years. Twitter still has a chance of reclaiming some of that territory — Costolo promised better direct messaging and other changes in the coming months to compete with WhatsApp, Snapchat and other messaging apps. But in the eyes of many, Twitter’s only useful for celebrities, companies and public figures with something interesting to say publicly — it’ll be an uphill climb to escape that stigma and start claiming new users who just want to Chat With Friends. 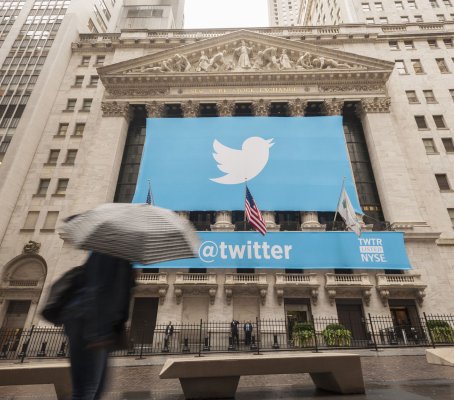 Twitter Tumbles on Growth Fears
Next Up: Editor's Pick