Warning: This post contains spoilers for season 2 of Stranger Things.

Despite the fact that he was brutally killed off in season two of Stranger Things, Bob Newby was able to win the hearts of fans in just nine short episodes. And Sean Astin — who played Bob the Brain — knows why.

In an interview with Vulture, Astin explained how Bob’s devotion to the Byers family was not unlike the fierce loyalty of his beloved Lord of the Rings character Samwise Gamgee — who was the only member of the Fellowship to accompany ring-bearer Frodo all the way from the Shire to Mount Doom and back again.

“There are definitely similarities between Bob and Samwise,” he said. “Sam is the guy you want to have with you when stuff gets hard. As it turns out, even though he’s a dorky wannabe stepdad, Bob is also a guy who isn’t overwhelmed by a terrifying reality.”

Is it too much to ask for a Lord of the Stranger Things crossover? 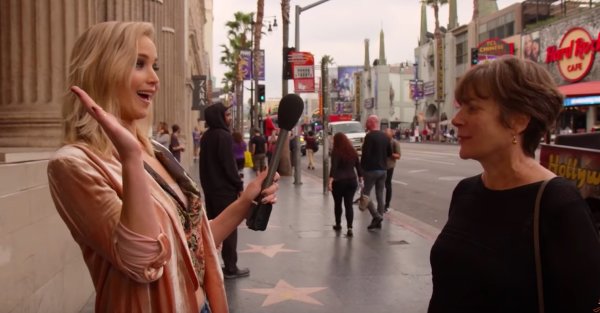 Jennifer Lawrence Surprising Fans and Making Fun of Herself on the Street Is a Joy to Behold
Next Up: Editor's Pick