The Republican tax plan has only been out for 24 hours and interest groups are already lining up to denounce it.

Republicans have said that under the new bill, Americans would be able to file their taxes on a postcard and the average family of four would see a $1,182 cut on their next tax bill. Their plan cuts the corporate tax rate to 20%, nearly doubles the standard deduction and reduces the number of tax brackets. But the bill also cuts a number of deductions and credits that benefit very specific groups of people, and they’re not happy.

Shortly after the bill was released on Thursday interest groups representing small business owners, home builders, Realtors and universities came out against it in its current form. Even the U.S. Chamber of Commerce, which is supportive of Congress’s effort to overhaul the tax system, said in a statement that there’s work to be done to get the “exact policy mix right.”

The issues interest groups have with the policy in its current form vary, but most say they’re open to working with Congress to address the issues they’ve raised. Interest groups for American colleges and universities have said changes to some higher education benefits like the American Opportunity Tax Credit and Lifetime Learning Credit, would block some from accessing institutions of higher learning. The Susan B. Anthony List, a national pro-life group, supports a provision that would allow parents to start college savings plans for “unborn children,” but opposes the elimination of a tax credit for adoptive parents.

“Larger pass through companies that generate more income are going to benefit” from the proposed 25% rate for pass-through benefits — down from 39.6% — says NFIB’s Jack Mozloom. “But 85 to 95 percent of our members are not.”

Mozloom says the bill also “attempts to exclude businesses from the tax based based on what they do for a living,” referring to new “guardrails” that would keep some professional service providers from benefiting from the lower rate. “The tax code should not pick winners and losers based on the type of businesses they’re operating.”

The groups says that though the cannot support the bill in its current form, it will work with the House and Senate to improve the bill.

Chairman of the National Association of Home Builders Granger MacDonald, whose members build 80% of America’s new homes every year, said in a statement on Thursday that a $500,000 cap the bill puts on mortgage deductions for new homes and a $10,000 limit on property tax deductions would slam the middle class.Capping the mortgage interest rate, he said, “means that home buyers in expensive markets will effectively lose this housing tax benefit moving forward.”

The group had been supportive of the tax framework, says NAHB CEO Jerry Howard, but in its current form the bill is a “bait and switch for individual taxpayers.” He says he’s already reached out to “anybody who will listen to us” in Congress to propose changes, including the addition of a homeowners tax credit he says would benefit the middle class.

“The bottom line from our perspective is this bill is a pat on the head for small business and a direct assault on housing,” he says. Howard also warns that the proposed mortgage cap could lead to a reduction in home prices across the board—if prospective buyers cannot utilize the deduction, sellers could find themselves lowering prices so people can afford homes.

The National Association of Realtors has been critical of tax plans it argues would put homeownership out of reach for millions of Americans in the middle class. In its current form, the group said in a statement on Thursday that the House bill would “nullify the homeownership incentive for all but the top 5 percent of tax filers” by capping the mortgage interest deduction, nixing state and local tax deductions and capping property tax deductions at $10,000. The group also rejected limits on how filers exclude home sales from income.

“We know this legislation is just the beginning of a much longer discussion. Our members will continue to make their voices heard as we push towards tax reform that responsibly lowers rate while protecting the dream of homeownership,” NAR president William Brown said in a statement.

The effort to get the long-awaited plan had already been gearing up to be an uphill battle. The $1.5 trillion cut has to meet a particular set of standards so it can get through the Congress via an expedited process. Several members from high-tax states like New York and New Jersey have been wary of cuts to state and local tax deductions, which they feel will hurt their constituents. Republicans in the Senate, which is set to release its own version of the bill soon, have also expressed some concerns. And Democrats in both chambers are almost unanimous in their discontent for both the bill and the partisan nature of its drafting.

The American people are also showing signs of skepticism — new polling from the Washington Post and ABC News found 60% of Americans believe the plan favors the rich and half of Americans outright oppose it (though Republicans are more supportive). 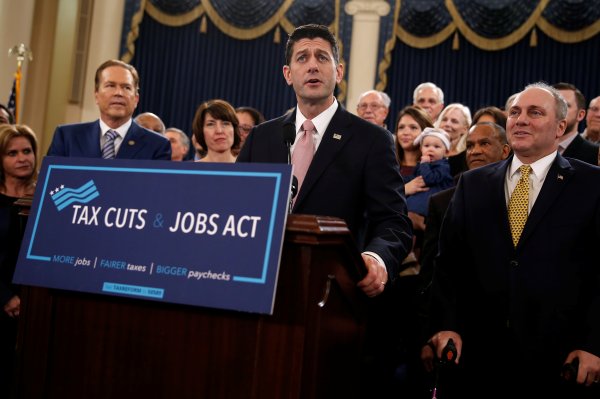 The Tax Plan's Winners and Losers
Next Up: Editor's Pick