A couple was arrested this week after Arkansas police said they found a 1-year-old boy dead and badly decomposing inside a plastic container in their apartment closet, PEOPLE confirms.

Maria Giron-Molina and her boyfriend, Tyler Hobbs, both 21, have been taken into custody in connection with the death, Fayetteville Police Chief Greg Tabor said in a news release on Tuesday.

Giron-Molina was the boy’s mother and Hobbs lived with the family, according to Fayetteville police Sgt. Tony Murphy.

Authorities alleged that Hobbs initially called police on Monday evening, saying the child had fallen down the stairs and started seizing “a few days ago.”

When officers arrived at the apartment, they found the child’s body inside the closet. Murphy said the container with his remains was a Sterilite product about 43 inches long, 18 inches wide and 13 inches tall.

The child’s body was shoved into the container, which was then placed inside the closet of the bedroom the couple shared and covered with blankets, according to authorities.

The body was in an “advanced state of decomposition,” Chief Tabor said.

Police said Hobbs allegedly told dispatchers he was scared at the time and did not know what to do.

But at the police station, Giron-Molina and Hobbs allegedly gave detectives different accounts of what happened to the 1-year-old, according to Tabor. Hobbs later changed his story, allegedly admitting that he had shaken the boy “back-and-forth” after the child wouldn’t stop crying while he had a headache.

“Angered at the child’s refusal to calm down, he picked the child up and covered its mouth with his hand to ‘muffle’ the crying,” Tabor alleged of Hobbs, adding that the boy fought back by hitting and scratching the man.

Hobbs allegedly told police he “blacked out” during the shaking and noticed the child had stopped breathing when he regained consciousness, Tabor said.

“He expressed remorse for his actions, and he said he did not intend to harm the child,” the police chief said.

It’s unclear whether either suspect has retained a lawyer who could comment on their behalf. 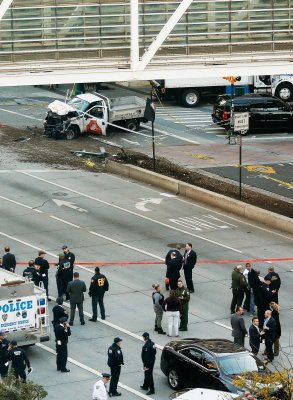 The New Terrorism Comes to Ground Zero
Next Up: Editor's Pick