There Are Two Donald Trumps. Which Will Show Up In Asia?

On the eve of his inaugural trip to Asia, Donald Trump is a president divided. There’s the populist, wild-tweeting Trump, who started his presidency by pulling out of the Trans-Pacific Partnership and worrying Pacific allies that Trump’s America was going solo to protect her interests.

But there is also a far more traditional Trump, whose actual policies have embraced the approach presidents have taken since Nixon visited China, to build international structures to benefit the American strategic interest.

“We’ve got two very different efforts underway,” says Elizabeth Economy, director for Asia studies at the Council on Foreign Relations. “Those two visions need to be integrated in order for the region to understand what they can expect from the United States.”

There’s a lot at stake. Trump will visit Japan, South Korea, China, Vietnam and the Philippines over the course of ten days. The trip comes as North Korea continues to test its nuclear capabilities, as China’s economic and military might in the region continues to grow, and as nations are developing economic partnerships, with or without the U.S. The White House hopes to shore up U.S. alliances and promote a free and open Indo-Pacific region.

Much hangs on how Trump reconciles the two competing visions while abroad. “The question is,” says former longtime diplomat Daniel Fried, who coordinated U.S. sanctions policy during Obama’s second term, “Can Trump in Asia find the right balance between pressure on North Korea and indirect pressure on the Chinese without blowing it all up by being so bellicose that he loses the political credibility he needs to carry this out?”

The Trump Administration has also been pushing other countries to end or shrink their diplomatic ties to North Korea. In late 2016, the U.N. Security Council unanimously passed a resolution to crack down on North Korea’s use of its diplomatic missions to finance its nuclear program. Since Trump took office, more than 20 countries have restricted North Korean diplomatic activities, Susan Thornton testified to the Senate in late September. “To this administration’s great credit, I think it has pursued what has appeared to be a very dogged and sequential strategy against North Korea,” says Brian O’Toole, a sanctions expert who worked at the U.S. Treasury during both of Obama’s terms.

Trump continues to prioritize partnerships with U.S. allies in the region. Trump will arrive in China only after first visiting Japan and South Korea, major partners on North Korea. Japanese Prime Minister Shinzo Abe may have the strongest relationship with Trump of any foreign leader. He was the first world leader to meet with Trump after he won the election, and they speak regularly.

The U.S. has also pushed back against China’s island-building in the South China Sea. U.S. Pacific Command continues to patrol the South China Sea to signal freedom of navigation in the waters. Weeks before Trump’s trip, the U.S. sent a destroyer near the islands, angering Beijing, as it has done in recent months. But this move was far more routine than the Administration’s statements shortly after inauguration, which prompted questions of possible military escalation and war in the sea.

This is part of more complex U.S. strategy to manage China’s rise. North Korea and the South China Sea both present real strategic challenges for both the U.S. and China, in different ways. Trump needs China to see that a nuclear North Korea is a strategic liability in the region, while managing China’s concerns that the U.S. is simply trying to contain it. “The Chinese play is the critical one,” says Fried. “China is not the problem, it should be part of the solution.”

General H.R. McMaster, Trump’s national security advisor, told reporters on Thursday that Trump’s trip builds on previous accomplishments. “At the ASEAN (Association of Southeast Asian Nations) 50th birthday party in Manila, the president will discuss how to strengthen partnerships across the Indo-Pacific to further efforts against transnational terrorist organizations,” McMaster said. “This trip is an opportunity to build momentum toward shared prosperity and security.”

And yet, Trump continues to interrupt this policy stream with his unpredictable and America first philosophy. The White House announced Trump would end his trip to the Philippines early and only attend opening festivities for the East Asia Summit, an annual gathering of Pacific nations, not the main sessions. Obama was the first U.S. president to attend the summit, and now critics fear the lack of top U.S. engagement in the meetings cedes the power to China. “It is regrettable,” says Russel. “He could talk in one swoop to 17 other leaders.”

Trump’s transactional approach to policy disagreements also can pose limits. Strategic challenges like North Korea, the South China Sea, and free trade economic principles tend to require sustained engagement that reflects a long-term plan. China has its “One Belt One Road Initiative,” an ambitious, $5-trillion project to expand its influence across Asia with infrastructure projects and military access. Trading China’s response to North Korea for trade deal provisions, for example, could be problematic. “He would give the advantage to the Chinese, who have mapped out a much longer vision for their own role in the region,” says Economy.

Though Trump has supported South Korea on the nuclear threat to its north, he has also attacked the country on trade. Trump has repeatedly threatened to withdraw from the five-year-old U.S. trade agreement with South Korea. Trade may be more aimed at his voters at home than at addressing U.S. security interests abroad. “There is a lot of anxiety in South Korea about durability of U.S. commitments,” Scott Snyder, director of the U.S.-Korea policy program at the Council on Foreign Relations. “That has to be managed.”

Trump’s own personal diplomacy strategy is often a wildcard. Will he prioritize strongmen, like China’s Xi Jinping and the Philippines’ Rodrigo Duterte, over allies like Abe and South Korea’s Moon Jae-in? Will he continue to go after “Little Rocket Man,” as he calls Kim Jong Un, on Twitter? His own Secretary of State trip to China in late September was immediately undercut when Trump tweeted that his own Rex Tillerson was “wasting his time” negotiating with Kim.

Trump, McMaster says, will continue to go his own way. “The president will use whatever language he wants to use obviously,” he told reporters of how Trump will discuss North Korea on the trip. “I don’t think the President really modulates his language, have you noticed him do that?” 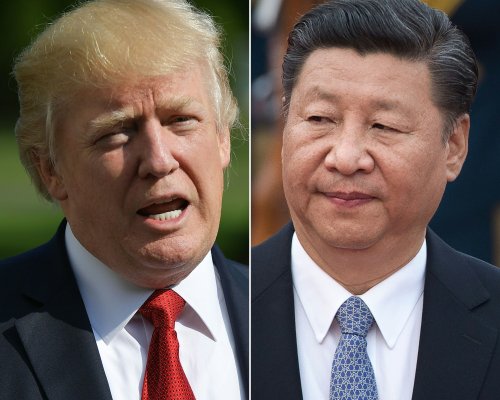 Trump to Press China on North Korea
Next Up: Editor's Pick