Until Donald Trump named him among the top foreign policy advisers to his presidential campaign in March 2016, George Papadopoulos was a political nobody. Five years out of university, he’d traveled in Europe, worked for a think tank and spent about two months as a staffer on Ben Carson’s long-shot campaign. But the 30-year-old researcher is a nonentity no more. When he pleaded guilty on Oct. 5 to lying to the FBI about his contacts with Russian officials during the Trump campaign, Papadopoulos rocketed to the center of an ongoing federal investigation into Moscow’s involvement in the 2016 election.

Papadopoulos’ emails, texts, Facebook messages and Skype conversations in 2016 provide perhaps the clearest picture so far of Russia’s attempts to assist the Trump campaign–and of top Trump staffers’ willingness to accept that help. Court records unsealed on Oct. 30 show that Papadopoulos, in his capacity as a Trump adviser, communicated regularly with Russian agents, encouraging cooperation and working to arrange meetings between Trump’s campaign officials and Russian agents. In one email, for example, one of Papadopoulos’ Russian sources offered to share “thousands of emails” providing “dirt” on Hillary Clinton, according to the records. In another, Papadopoulos tells top campaign staff that Russian President Vladimir Putin was prepared to host Trump “and the team when the time is right.” In yet another, Papadopoulos tells a contact with ties to Moscow that a proposed meeting between “my national chairman and maybe one other foreign policy adviser” and Russian agents “has been approved by our side,” according to the records. White House press secretary Sarah Huckabee Sanders scrambled to distance Trump from Papadopoulos by calling him a low-level “volunteer.” Trump, who once described him as an “excellent guy” during an interview with the Washington Post, followed the same script. “Few people knew the young, low level volunteer named George,” Trump tweeted on Oct. 31, “who has already proven to be a liar.”

But the court documents and transcripts associated with Papadopoulos’ plea agreement show that some of Trump’s top advisers worked closely with Papadopoulos for much of 2016. A “high-ranking campaign official” and a “campaign supervisor,” both of whom go unnamed in the documents, regularly replied to Papadopoulos’ emailed updates. In some cases, they forwarded them to other top Trump advisers for discussion. Not everyone was on board. At least one senior Trump aide squashed the idea of Trump meeting Putin directly, according to court documents. “We need someone to communicate that D.T. is not doing these trips,” the campaign official wrote in an email. “It should be someone low level in the campaign so as not to send any signal.”

Papadopoulos’ role in the investigation doesn’t end there. After he was arrested in July 2017 upon landing at Dulles International Airport, outside Washington, he apparently agreed to become a “proactive cooperator” with federal agents. While there’s no precise definition of what that means, law-enforcement officials say it could mean Papadopoulos agreed to wear a wire during conversations with targets of the Mueller probe or otherwise helped to gather evidence. In a transcript of the Oct. 5 court hearing, Aaron Zelinsky, an attorney for the special counsel’s office, told the judge that Papadopoulos had helped federal agents identify important documents and guide future inquiries. Papadopoulos’ “efforts to cooperate,” Zelinsky notes, have provided investigators a useful “road map” for the months ahead. 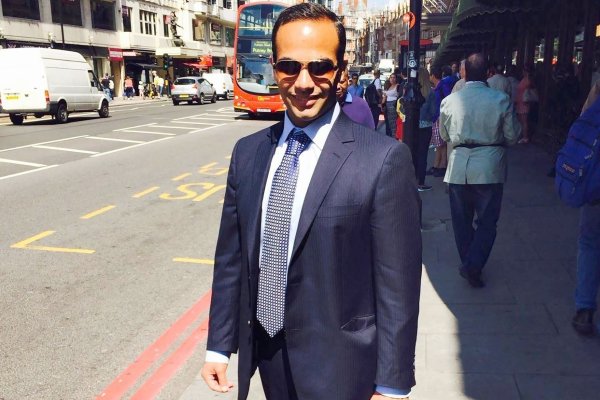 George Papadopolous Posted an Old Photo on Twitter and People Called Him Out
Next Up: Editor's Pick