President Eisenhower's message launching the U.S. into combat in Casablanca
Courtesy of The International Museum of World War II
By Lily Rothman

When the message was decoded, it was only two words long, and it could have referred to almost anything: PLAY BALL.

In the context, however, the meaning was clear — and more complex than its brevity would suggest. The recipient, after all, was Maj. Gen. George Patton, who was on a ship off the coast of Casablanca, waiting for word from Gen. Dwight Eisenhower, the future president and Supreme Commander of the Allied Expeditionary Force. This message, from Eisenhower, was the go-ahead he needed to launch the invasion known as Operation Torch, which he did 75 years ago, on Nov. 8, 1942. With that, American forces were officially engaged in their first World War II combat in the war’s Europe and North Africa theater.

The decision to help the Allies concentrate on Germany first was not a foregone conclusion for the U.S., given the attack on Pearl Harbor, but it quickly paid dividends in North Africa. “The occupation of French North Africa had been accomplished with Blitzkrieg briefness, utilizing expert coordination of planes, ships, tanks, trucks, guns and courageous men. In spots it was easy. In others resistance was bitter, though brief,” TIME summarized in the aftermath:

The copy of the decoded message seen above will be on display starting Wednesday as part of the exhibition The Real and Reel Casablanca; American Troops Enter World War II, Landing in North Africa at the International Museum of World War II in Natick, Mass. It ended up in the collection, explains museum director Kenneth W. Rendell, via an aide to Patton. “Patton read it and handed it back to him, and said, ‘Save this, it’s an important souvenir,’” Rendell says. He did, and the the museum later acquired the message from his family.

This invasion was, Rendell says, “really the beginning of the Patton legend.” It was also the beginning of awareness, for many Americans, of where Casablanca was and what was going on in North Africa. That’s part of the reason why the movie Casablanca is also part of the story, as it was rushed to theaters within weeks of the invasion and helped inform American audiences at home, Rendell says, “showing people where their husbands and sons were fighting and what it was like there.” 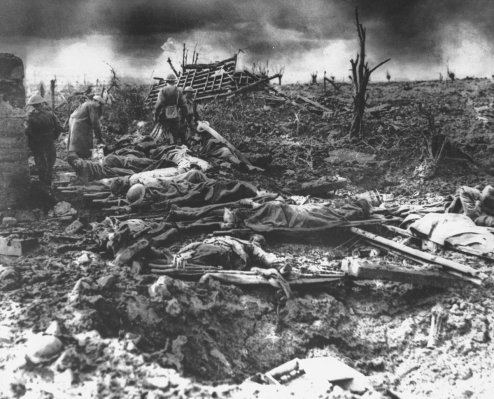 Why Passchendaele Was One of the Ugliest Battles of World War I
Next Up: Editor's Pick