The driver who killed eight pedestrians and injured at least a dozen people when he barreled down a New York City bike path in a rented pickup truck Tuesday has been identified as Sayfullo Saipov.

Authorities said Wednesday that Saipov had been planning the attack for weeks. He said he committed it in the name of ISIS, authorities added.

The assault bore similarities to incidents carried out in Europe by assailants affiliated with the Islamic State, including attacks in Nice, France in July 2016, in Berlin in December 2016, in London in June 2017, and in Barcelona in August 2017. While there was no immediate announcement from the Islamic State claiming responsibility for this attack, law enforcement officials said Wednesday they found a handwritten note declaring allegiance to the group inside Saipov’s rented truck.

Saipov, 29, was taken into custody and hospitalized after he was shot by police following the attack, during which he drove a rented Home Depot pickup truck 20 blocks down a bike path that parallels the Hudson River in Lower Manhattan. After hitting numerous pedestrians and bicyclists, Saipov struck a school bus. He then exited the truck with a paintball gun and pellet gun, and shouted, “Allahu akbar,” a law enforcement official told the Associated Press. The phrase means “God is great” in Arabic.

White House Press Secretary Sarah Huckabee Sanders said Wednesday that the Trump administration would consider Saipov an enemy combatant. As of Wednesday afternoon, Saipov is still in the hospital, authorities said. He has been interviewed by law enforcement.

Who is Sayfullo Saipov?

The 29-year-old Sayfullo Saipov is originally from Tashkent, Uzbekistan and immigrated to the United States in March 2010, authorities said Wednesday. A spokesman from the Department of Homeland Security said he entered the United States under the

Saipov initially stayed in Cincinnati for about two weeks with the family of his father’s friend, according to a member of the host family quoted by the Washington Post.

Uber confirmed that Saipov was a driver and has been banned from the Uber app. Spokesperson for the company tells TIME: “We are horrified by this senseless act of violence. Our hearts are with the victims and their families. We have reached out to law enforcement to provide our full assistance.”

Where did Sayfullo Saipov live?

Court records indicate Saipov had an address in Tampa, Fl., and may have also identified as Fayfullo Faipov at one point. He is believed to have been most recently living in Patterson, New Jersey with his wife and three children, ABC reported. Saipov reportedly rented the truck he used to carry out the attack in New Jersey. 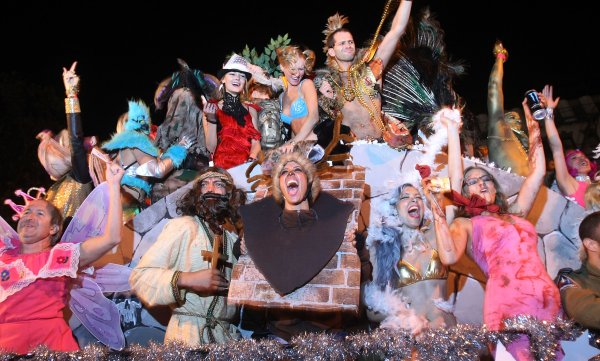 New York's Halloween Parade Will Go on as Planned After Terror Attack in Lower Manhattan
Next Up: Editor's Pick