In the indictment, special counsel Robert Mueller says that Manafort and Gates worked as unregistered foreign agents on behalf of Ukrainian political interests including its pro-Russian Party of Regions and President Viktor Yanukovych between 2006 and 2015. At the same time, the pair allegedly hid revenue from those clients in overseas bank accounts and laundered it through a web of companies to bring it back to the U.S. without paying taxes.

As a prominent American lobbyist who has earned a reputation helping controversial foreign governments, Manafort was central to the scheme. But the indictment says that Gates played a key supporting role coordinating as Manafort’s “right-hand man” and in several cases mimicked Manafort’s behavior.

The relationship between Manafort and Gates extends back decades to the early days of the consulting firm Black, Manafort, Stone & Kelly where Gates served as an intern in the 1980s, according to a New York Times report.

The indictment focuses in large part on the pair’s work for Davis Manafort Partners, Inc. and DMP International, LLC lobbying on behalf of Ukraine and political interests there beginning in 2006. In 2012, Manafort and Gates selected two American firms — Mercury Public Affairs and the Podesta Group — to work on the push. In that effort, Manafort communicated with Yanukovych while Gates would direct messages from the president to affiliates at Mercury and the Podesta Group and, in turn, those companies lobbied Congress about Ukrainian sanctions among other things, according to the indictment.

But the indictment suggests that the pair actively hid their own involvement, preparing talking points to push back on allegations that they were lobbying within the U.S. on behalf of the Ukraine. “Our firm did not play a role in the structure, nor were we registered lobbyists,” the talking points said, according to the indictment.

In another allegation, in 2016 Manafort needed documentation to show that his daughter and son-in-law lived in an apartment he had purchased to secure a more favorable loan when in fact he earned revenue on the property as a rental. So Manafort turned to Gates, who “caused a document to be created” to support the misrepresentation, according to the indictment.

Manafort’s spending with money allegedly laundered from overseas — including some $12 million spent on personal items between 2008 and 2014 — have attracted considerable attention. And Gates engaged in similar behavior, transferring $3 million from offshore accounts to others he controlled. He illegally used funds to pay for improvements to his Virginia home and to pay his children’s tuition, according to the indictment.

The pair parted ways after Manafort was booted from the Trump campaign last August. As concerns about Manafort’s ties to foreign governments made him undesirable figure to keep around the Trump orbit, Gates flew under the radar and worked with the Trump campaign and the Republican National Committee until the election.

After Trump’s victory, he helped launch the pro-Trump nonprofit America First Policies and remained there through around March. “We believe it is important to clarify that Rick Gates’s association with America First Polices was informal and limited; and, as noted in press reports, ended around March of this year,” said Katrina Pierson, an official with the group, in a statement to TIME. “Since then, he has had no formal or informal role with the organization.”

Gates landed at Colony NorthStar Inc. — a company owned by Trump friend and campaign donor Tom Barrack — after leaving America First Policies, but was fired from the company following the indictment, according to a Bloomberg news report. “He was working on investigating and understanding the next set of opportunities in digital infrastructure: data centers, radio towers, communications technology, media,” Barrack told Bloomberg. “In all aspects of what he did for me he was competent, capable and reliable.”

After close to a year apart, the two reunited in federal court Monday as they faced charges that could land them both in prison for more than 20 years. They pleaded not guilty. 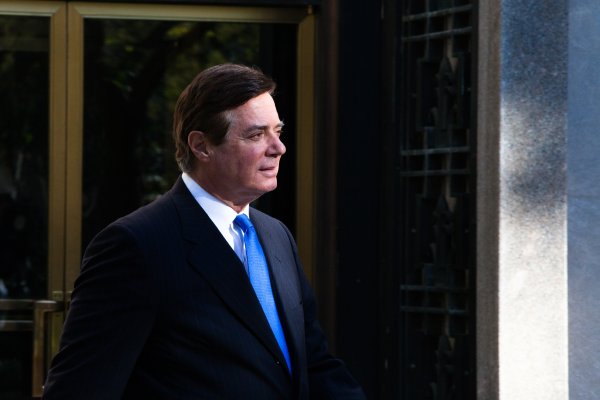 Here's What You Need to Know About the First Charges in Mueller's Investigation
Next Up: Editor's Pick