In the days after the terrorist attack in Paris in November 2015, every Republican presidential candidate began frantically scrambling to hire experts to bulk up their campaign’s foreign policy credentials. The problem was, it was slim pickings.

“All the of the Republican foreign policy establishment was working for [Jeb] Bush or Marco [Rubio],” recalled Barry Bennett, who was Ben Carson’s campaign manager at the time. “It was utter and total desperation to find people.”

So when a resume from an unknown young man named George Papadopoulos arrived, unsolicited, at the Carson campaign headquarters, Bennett gave it more attention than it may have deserved.

Bennett had never heard of Papadopoulos, who was in his late twenties at the time, nor did he recognize much on the young man’s resume. But he did notice that between 2011 and 2015, Papadopoulos had worked at the Hudson Institute, a conservative, Washington, D.C.-based think tank, where Bennett’s friend, Kenneth Weinstein, was president. So Bennett called up Weinstein to see what was up.

“I said, ‘Who’s this guy? Did you like him? Did you fire him?'” Bennett recalled, with a laugh. “Ken didn’t know him well, but said, basically, ‘He’s junior, he’s smart.’ So we hired him and that was it.”

The guilty plea, filed three weeks ago on Oct. 5, catapulted Carson’s erstwhile advisor to the roiling center of a federal investigation into Russian meddling in the 2016 presidential campaign.

The arc of Papadopoulos’ rise and fall is short.

Raised in Chicago to Greek immigrant parents, Papadopoulos graduated from DePaul University in 2009 with a degree in political science and government. As an undergraduate, he was involved in the Greek-American community and took a deep academic interest in Greek, Turkish, and Cypriot politics.

Both Papadopoulos’s old Facebook page, which federal investigators noted he hastily deleted in February 2017, shortly after he was interviewed by the FBI for the second time, and his current Facebook page feature posts about Greek-American organizations. His Facebook groups include the Cypriot Young Professionals of the Cyprus U.S. Chamber of Commerce and the Hellenic Professional Society of Illinios.

After graduating, Papadopoulos enrolled in a master’s program at the University College London’s School of Public Policy, where he studied security issues, according to his LinkedIn profile. From 2011 to 2015, Papadopoulos landed a job at the Hudson Institute, where he studied the same Mediterranean region that had drawn his interest as a student.

By the time his resume landed on Barry Bennett’s desk at Ben Carson’s campaign headquarters, Papadopoulos had left the Hudson Institute and was working for a small, oil and gas firm called Energy Stream, which lists only two employees on LinkedIn.

Papadopoulos’ brief time as an advisor to the Carson campaign seems to have passed largely without note. Armstrong Williams, who served in various roles in Carson’s campaign, told TIME that Papadopolous was paid $8,500 for his work in December 2015 and January 2016, and then received only a partial salary, $2,125, in February, when he left the campaign.

“After the terrorist attack, Barry Bennett and his deputy Lisa Coen thought we had to have substance so they had this hiring spree, hiring all these people to show we had foreign policy experts,” Armstrong said. “Papadopoulos was one of those people.” Bennett resigned from the campaign in December and within two months, most of those new hires were let go due to restructuring and cuts, Armstrong said.

No one in the Carson campaign remembers much about Papadopoulos, perhaps in part because he worked remotely from Chicago, Bennett said. “If there was any work output, I never saw it,” he told TIME. “It never ended up on my desk.”

“I don’t remember the guy,” Shermichael Singleton, Carson’s communications director told TIME. “I remember his name in emails, but I can’t remember meeting him. I don’t want to lie — maybe we did meet once or twice — but I don’t remember it.”

Jason Osborne, another senior official in Carson’s campaign, had an equally muddy recollection. “Honestly I only remember his name because it was unique and reminded me of Webster,” he wrote in an email to TIME, referencing a television show from the late 1980s that featured the Papadopolis family.

What’s clear is that at the time that Trump listed him among his top foreign policy advisors, Papadopoulos had very little foreign policy experience. The Washington Post noted that, in March 2016, he still listed Model United Nations among his work experience on his LinkedIn page.

During this same time period, beginning in March 2016, federal investigators noted that Papadopoulos, because of his stature on the Trump campaign, began to attract the attention of at least two people with interests in connecting Russian officials with the Trump campaign. Federal investigators identified these individuals in court documents as a “professor” and a “female Russian national.”

The Washington Post reported that the unnamed professor is Joseph Mifsud, who is described as an “honorary director” of the London Centre of International Law Practice on the London-based organization’s website. Papadopoulos also claims on his LinkedIn page to have been a director at that same organization, the London Centre of International Law Practice, from February to April 2016, although, unlike Mifsud’s, his name does not currently appear on the website.

In the court documents, the professor writes that he is going to Russia on April 18 to attend a meeting of the Valdai discussion club, a Moscow-based think tank. Mifsud attended a Valdai club meeting on April 19, according to a photo on the group’s website.

In August 2016, when Papadopoulos met with Trump and other campaign officials in Washington, DC, he told the group “that he had connections that could help arrange a meeting between then-candidate Trump and President Putin.” In at least one email, Papadopoulos suggests that Russian President Vladimir Putin had offered to “host” Trump.

Two unnamed Trump campaign officials were aware of Papadopoulos’ efforts to set up a high-level meeting between the Trump campaign and the Russians during this time and applauded his work, according to emails quoted in the court filings. One commended him for doing “great work.” Another suggested that Trump himself should not directly attend any meetings. “We need someone to communicate that DT is not doing these trips,” one email said, according to the court documents. “It should be someone low level in the campaign so as not to send any signal.”

During interviews in January and February with federal investigators, Papadopoulos said repeatedly that he’d had very limited contact with Russian nationals during his time as Trump’s advisor, and had not met with Russian liaisons while serving as an advisor to the Trump campaign. After the federal investigation revealed otherwise, he pleaded guilty to making false statements to federal agents after an FBI investigation.

Pratheek Rebala contributed to this report. 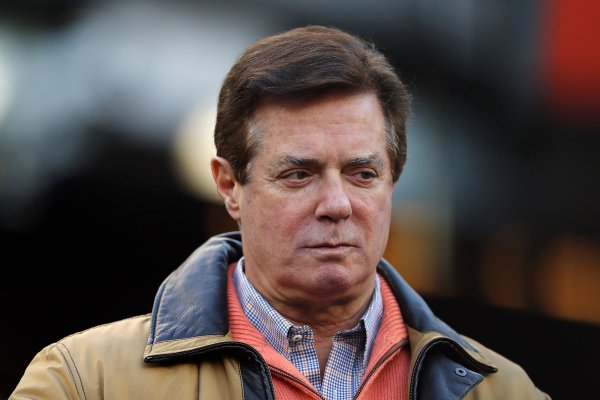 Paul Manafort Was Just Indicted For Conspiracy Against the United States. What's That?
Next Up: Editor's Pick