Martin Luther Changed Christianity 500 Years Ago. It Changed Again in the 1960s

In 2016, visitors stand in front of the cast metal reproduction of Martin Luther's 95 theses in the doorway where in 1517 Luther originally nailed his theses at the Schlosskirche church in Wittenberg, Germany
Sean Gallup—Getty Images
By Patrick Lacroix / History News Network

It was 500 years ago, Oct. 31, 1517 in the old Julian Calendar, that Martin Luther submitted his Ninety-Five Theses to Roman Catholic authorities. Nearly all of American history bears the imprint of that act of protest. Luther’s challenge, the protection he obtained, and the reformers he inspired laid the foundation for the Protestant establishments of colonial America.

Vigorous anti-Catholic rhetoric and occasional violence under the Early Republic indicate that lofty Enlightenment ideals checked longstanding prejudice only to a point. Rather, the limited ecumenical impulses of the country’s formative decades cemented the United States as a “pan-Protestant enterprise.” Beginning in the 1840s, mass immigration of Catholic groups reinforced the foreign and allegedly un-American character of the Catholic faith.

Barriers to religious amity, let alone dialogue, remained largely intact through the next century. The experience of the Second World War and suburbanization went only so far. Many scholars emphasized the development of inclusive Judeo-Christian discourse at the height of the Cold War. But the sustained popularity of anti-Catholic polemicist Paul Blanshard and reactions to John F. Kennedy’s presidential bid revealed well-entrenched hostility to “Catholic power.” In 1960, most Americans were still living in religious silos undergirded by fear and insecurity.

Then, unexpectedly, came a deluge. The entire sphere of American religion was, to use Robert Wuthnow’s phrase, restructured. In quick succession, landmark events moved consciences. In 1967, on the 450th anniversary of Luther’s letter, one educator exclaimed, “If anyone had suggested 15 years ago that Protestants and Roman Catholics would be confessing mutual guilt in rending the robe of Christ, I would have said, ‘You’d better go see a psychiatrist.’” But such was the case now. It was a sign of the times that Fordham University, a Catholic institution, and Union Theological Seminary co-sponsored a highly attended forum to mark the anniversary. Three months later, Presbyterian spokesman Eugene Carson Blake and Vatican representatives announced a common venture, the Joint Committee on Society, Development, and Peace, to be housed by the World Council of Churches in Geneva and chaired by Jesuit George H. Dunne. How did it all happen?

However short, President Kennedy’s time in office had much to do with diminishing wariness. It was emblematic of contemporary feelings that Protestant hardliners pilloried James Wine, an official with the National Council of Churches, for joining the Kennedy campaign in 1960. Martyred Reformation leaders had apparently died in vain, they declared. Kennedy’s victory at the polls resolved little, but his time in office quelled fears about “Catholic power.” On federal aid to education, Kennedy asserted his independence, such that Catholic opinion makers accused the president of “[bending] over backwards” to please Protestants. The White House also assembled interdenominational coalitions in support of its agenda in civil rights and foreign policy, thereby facilitating exchange between likeminded Catholics, Protestants, and Jews.

A breakthrough of a different kind occurred in Albany, Ga., in 1962. For the first time, white clergymen of different faiths joined Martin Luther King, Jr. and fellow activists in large numbers in acts of protest. The civil rights movement and other opportunities to advance social justice helped the devout find a new purpose and a new rationale for interfaith efforts.

The American ecumenists had intellectual might on their side. John C. Bennett, Eugene Carson Blake, Robert McAfee Brown, John Cogley and Gustave Weigel lent their voices to dialogue and developed common forums. But not all of this owed to uniquely American developments. From Rome, in 1959, the aged John XXIII had issued a call for a Church council to bring Catholicism in conversation with the problems of the modern age. Weigel joined the Vatican’s newly-founded Secretariat for Promoting Christian Unity; to the world, Pope John explained that “[w]e are all brothers in Christ.” An olive branch to Protestants was thus extended.

The sense among many Protestants that the Catholic Church was now reforming itself—along the lines they had so long propounded—captured the optimism of the era. Blake and fellow advocates of Christian unity hoped for a single “united Church truly Catholic [i.e. universal], truly Reformed and truly Evangelical.” That was not to be. But the effect of the Vatican Council’s decrees and declarations still bore fruit. Catholic bishops, theologians, and laypersons returned to their dioceses more than ever committed to reconciliation. By 1967, that spirit was still making inroads.

Alas, on the horizon lay a thermidor of sorts. The following year, the encyclical Humanae Vitae quieted the reformist zeal of many Catholics. Mainline churches, Protestantism’s ecumenical vectors, began their steady decline. Religious denominations felt as well as other communities the overlapping shocks of racial strife, sexual liberation, and war. In the era of the “culture wars,” Christian reconciliation would take on new meaning and, now for different reasons, seem much less tangible.

The world recently lost, at age 94, theologian Gregory Baum. As a peritus during the Vatican Council, Baum was responsible for much of the language of Nostra aetate, a conciliar declaration meant to reset relations between Catholics, Jews, and other religious groups. In the 1950s, he had been one of the voices in the wilderness calling for greater interfaith dialogue. He had foreseen that ecumenism would strengthen Christianity and “make the Churches more sensitive to the problems of the world and the needs of humanity.”

Considering the vitriolic statements that long accompanied “Reformation Sunday,” the present near-insignificance of the October ritual offers solace. Indeed, that the 500th anniversary of Luther’s act has been noted without éclat in the United States may be something to celebrate. But Baum’s passing comes as a reminder that good will does not grow organically. As in the 1960s, friendly relations remain a function of difficult dialogue, soul-searching, humility and hard work. Thus, if we put the Reformation to rest, let us at least remember the exertions which, in the course of a tumultuous decade, revolutionized American religion.

Patrick Lacroix, Ph.D., is an instructor in the Department of History at Phillips Exeter Academy. He completed his dissertation, “John F. Kennedy and the Politics of Faith, 1960-1963,” at the University of New Hampshire in May 2017. His work has notably appeared in Histoire sociale/Social History, the Catholic Historical Review, and the American Review of Canadian Studies. 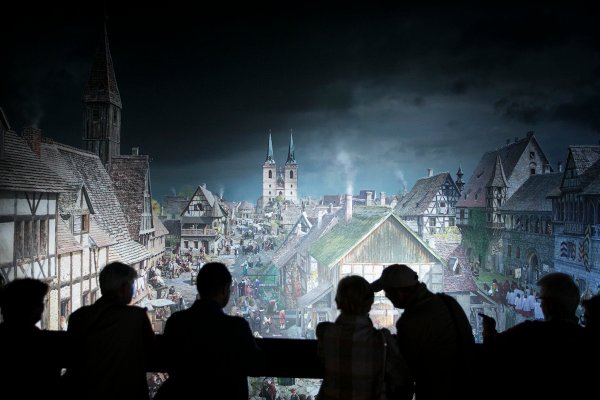 How the World Is Marking the 500th Birthday of Protestantism
Next Up: Editor's Pick