As the final wisp of smoke from King Bhumibol Adulyadej’s funeral pyre curled into the night sky late Thursday, thousands of black-clad Thais said their last goodbye to a much beloved monarch.

The $90 million funeral was marked by pomp and pageantry, but the night ended on a quieter note. Although the whole day’s ceremony was televised on Thai TV and broadcast across the city on giant screens, the actual cremation, scheduled at 10 p.m. local time, was a private affair for the Royal Family and special guests.

The cremation marked the end of a year of mourning, since King Bhumibol passed last October aged 88, and ushered in a new era for Thailand overseen by King Maha Vajiralongkorn.

Officials had designated Thursday as a public holiday, and by Friday the city had returned to normalcy with businesses and schools restarting — though commuters continue to don black attire.

At Wat Yannawa, famous for its boat-shaped temple, local officials and temple staff poured sandalwood flowers by the boxful into a burning pit in the middle of a replica of the golden crematorium.

Read More: ‘He Will Forever be Our Legacy.’ A New Era Dawns as Thais Bid a Final Farewell to King Bhumibol Adulyadej

Surakant Pothichak, a district official who had stayed up all night working, says the temple received more than 60,000 flowers from well-wishers around the district and from Thais in the U.S.

“I managed to pay my respects finally, after most of the people got their chance” Pothichak tells TIME. “We all have to do our best to help and we all want to be a part of this ceremony. I feel very content that we are almost there.”

Napatsorn Jitsupap, 39, is having trouble letting go. Arriving in Bangkok from northeastern Surin province Thursday with her son, she tells TIME that the crowds were so big that she could only see the tip of the 50-meter tall Royal crematorium, and she remained there until 2 a.m.

“When I saw the smoke, I thought, ‘Is he really going?’ I don’t want the King’s body to be cremated,” she says. “It feels like he’s really leaving us. I just felt my heart sink.”

King Bhumibol’s 70-year reign is succeeded by his son, Vajiralongkorn, a divisive figure in Thai society whose reputation has been marred by scandal and controversy over the years. But Jitsupap expresses hope that he will be guided by his father’s teachings.

“He has his sisters and the rest of the family to support him,” she says, adding that she is unsure how long it would take for the new sovereign to generate the same amount of devotion his father inspires.

“It depends on the work and the sincerity that he shows towards the people,” she says.

Because of the new King’s divisive reputation some experts say the military government’s use of the country’s strict lèse-majesté law will likely proliferate, as the junta attempts to cement Vajirilongkorn’s “cult of personality.”

“Article 112 will most likely continue to be increasingly enforced and extended across society because there’s a new sovereign and his stability is not totally entrenched,” says Paul Chambers, who works as a lecturer at the Naresuan University’s College of ASEAN Community Studies.

Since the military took power in a 2014 coup, the law has been used to stifle any dissent and more than 100 people have been arrested and jailed, some for simply sharing a Facebook post deemed defamatory.

“At the same time, there are many military bureaucrats who want to gain favoritism by trying to find more people that can be accused of breaking this rule,” Chambers says.

“In that respect, Article 112 is able to become a stronger and scarier weapon.” 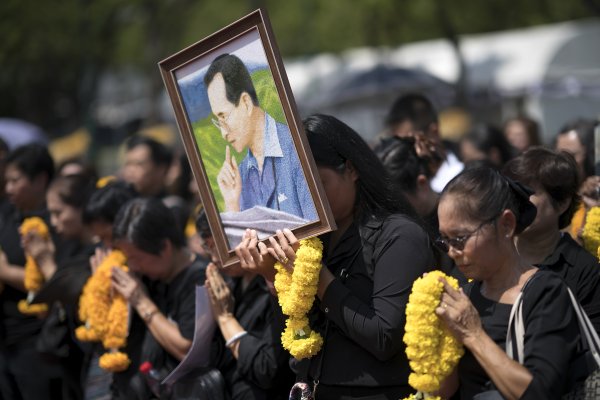 Thais Bid Farewell to Beloved King
Next Up: Editor's Pick