Republican Arizona Sen. Jeff Flake — who announced in an impassioned speech on Tuesday that he would not seek reelection in 2018 — said he will not support the GOP candidate for Senate in Alabama.

When asked by reporters, Flake said Thursday that he would not support Republican candidate Roy Moore.

“A guy who says that a Muslim member of Congress shouldn’t be able to serve? That’s not right,” he said, according to a video published by the Washington Post.

In 2006, Moore called out Rep. Keith Ellison after the Muslim Congressman took his oath on the Quaran, adding that Islam is “directly contrary to the principles of the Constitution.”

Moore has called Islam a “false religion” and said, “homosexual conduct should be illegal.”

He won the Republican primary in Alabama last month and is now favored to win the general election to fill the Senate seat vacated by U.S. Attorney General Jeff Sessions.

Flake, who criticized the direction of the Republican Party in his speech, is the only GOP Senator to speak out against Moore, who recently received endorsements from Texas Sen. Ted Cruz and Kentucky Sen. Rand Paul. 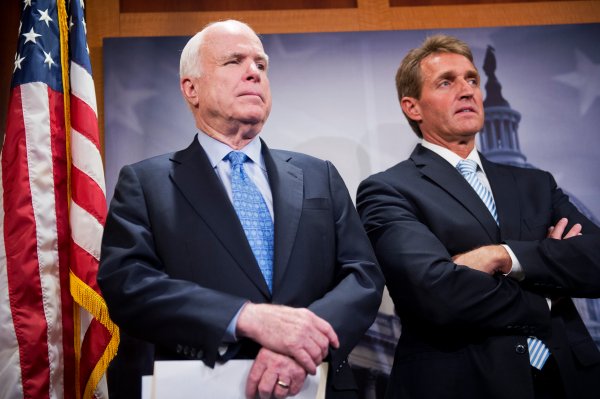 John McCain: Jeff Flake Stood Up For What He Believed In Knowing 'There Would Be a Political Price to Pay'
Next Up: Editor's Pick