For President Trump, the approval of a House budget bill by a four-vote margin was a cause for celebration. He took to Twitter: “Big news — Budget just passed!” The White House followed up with a note to reporters saying the vote “sets the stage” for tax cuts.

But within the roll call was a sign of trouble for the bill: 20 Republicans who voted against the bill and three who didn’t vote.

Many of them were from high-tax states like New York, New Jersey and California, where their constituents would be particularly hurt by a measure in the bill that would no longer allow them to deduct their state and local taxes from their federal taxable income.

Rep. Tom MacArthur, a New Jersey Republican who voted no on Thursday, told reporters there is no way to explain this to constituents as a responsible measure without details or counterweight. “We’re seven to eight innings into this and we don’t have a deal,” he said. “Twenty people voted no and dozens of others voted yes holding their noses. Leadership knows if we don’t get this resolved, we can’t move forward on tax reform.”

For Trump, who has consumed a diet of cable TV news for years and never held elected office prior to the presidency, the budget vote was something to be considered at a macro level. The pundits would call it a win for the president, while national conservative groups would praise it as a forward step for the cause of tax reform.

But no politician in the legislative branch is elected nationally. The men and women of Congress who will decide the fate of this tax reform proposal all report back to voters in their districts and states, many of whom have parochial concerns like high state taxes they like to write-off.

The House, where spending bills have to start, is preparing to release a draft of the tax plan Wednesday, with a committee rewrite slated for the following Monday. The Senate will take its red pen to it the week of Nov. 13 and have a floor vote on Nov. 20. The rapid pace is ambitious, for sure, but there are many pitfalls on its path. After all, this would be the most ambitious rewrite of the tax code since 1986.

For his part, Speaker Paul Ryan recognized the pitfalls when asked about the state and local taxes on Thursday. “This budget that we just passed, that is really important for getting tax reform done,” he told reporters, painting it as merely one step in the process. “The Ways and Means Committee will be putting out the specific plan very shortly and they’re going to work with all of our members to look at, and consider and address their concerns.”

But with lawmakers from states with high local taxes standing against what to them is a de facto tax hike, the White House seemed only to rely on what cable news was saying. The President has long thrived on tapping into and, often, exacerbating the narrative on the minute-by-minute coverage from the macro level. Yet sometimes he has understood the national mood so well he misses the local needs. For instance, instead of holding a campaign-style victory event on Thursday, he met with families impacted by the opioid crisis in the White House’s East Room.

That disconnect between the President’s enthusiasm and local lawmakers’ micro-level hesitancy has been on display before. On questions such as repealing Obamacare and building a wall on the U.S.-Mexican border, many from the President’s own party balked. For instance, Senators from states with thousands of constituents with health coverage because of the health care law weren’t eager to toss them from programs. And border-state Senators, like Jeff Flake and John McCain, understood a brick-and-mortar garrison along the southern border spelled bad politics back home.

Heading into next week, the President may again find his agenda stymied by parochial interests, and not just on the tax proposals. The Senate Banking Committee is scheduled to take up the nomination of Scott Garrett to lead the Export-Import Bank, an economic powerhouse that helps U.S. manufacturers looking to sell their goods abroad. Critics from across the spectrum have faulted the New Deal relic as corporate cronyism and a handout to some of the nation’s biggest corporations.

Trump was a critic of the institution as a candidate. He called it “featherbedding” during the campaign. “When you think about free enterprise, it’s not really free enterprise,” Trump said at the time.

Then, after meeting with CEOs who rely on Ex-Im funding for sales abroad, he switched gears and nominated Garrett. Allies said he saw the big picture beyond the slagging the bank took in conservative press and on Twitter.

The nominee, a former Congressman from New Jersey, is no fan of the institution he has been tapped to lead. (In fact, it’s a common trait within the Cabinet, as this week’s TIME Magazine reports in its cover story.) The pick brought groans from throughout the Senate because it either gave new life to the institution or issued its death warrant depending on where one sat.

Should Garrett hobble the bank or leave it impotent, that could cost jobs for states with major manufacturers who use its powers. For instance, Republican Sen. Tim Scott represents South Carolina, where Boeing has a huge footprint. Scott has a seat on the Banking Committee, where Republicans have only a one-seat advantage.

It won’t be an easy week for Scott as he considers an institution that House Financial Services Committee Chairman Jeb Hensarling of Texas routinely calls “the Bank of Boeing.”

Scott, for instance, has faced lobbying to reject that nomination, especially from the South Carolina Chamber of Commerce and other groups that benefit from Boeing’s economic power in the state. The National Association of Manufacturers also has run ads urging Scott to ditch Garrett.

Yet, if Scott rejects Garrett, the bank stays in neutral and Boeing loses out. The Ex-Im bank’s board has lacked a quorum since 2015, meaning it can’t cut deals worth more than $10 million. If backers of the lending organization want it to get back to work, lawmakers need to confirm Garrett. But in doing so, they’re installing someone who has railed against the institution’s very mission.

Complicating politics further has been a concerted effort among groups on the left to highlight earlier comments attributed to Garrett about LGBT rights. Some of Garrett’s potential supporters were left uneasy about elevating him to the new role and giving tacit endorsement of comments, some of which he said were misattributed or misconstrued. That record has made Democrats less willing to hold their nose in order to revive the bank.

Welcome to the nuance that seldom makes its way to Trump’s Twitter feed. The whole buffet makes sense from afar, but that random pickle on the chocolate cake is tougher to praise. In missing those small details—that issue that peels off lawmakers over the relatively local issue—Trump has at times stumbled. Trump is a big-picture New York developer, not someone who has spent his career listening to constituents’ complaints about trash pickup or potholes. If he is to prevail on the taxes, he’ll need to start looking in lawmakers’ backyards for their sinkholes or treating them like the bodega owner down the block.

With reporting by Nash Jenkins. 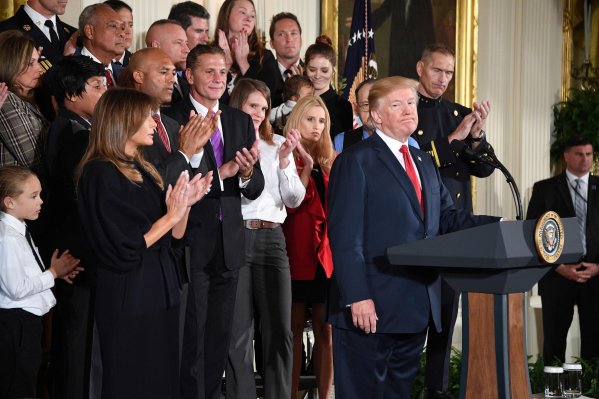 'He Really Helped Me.' President Trump Says His Brother Kept Him Away From Drugs
Next Up: Editor's Pick