President Trump Revealed His Plan to Deal With the Opioid Crisis. Here’s What Experts Think

President Trump declared the opioid crisis a public health emergency on Thursday, which he said marks a critical step toward combating the epidemic, which claimed over 30,000 lives in 2015.

The president’s declaration does a couple of things: it gives patients in rural area access to medically-assisted opioid treatment via telemedicine, it give states the freedom to hire more substance abuse counselors and it allows for existing funding for displaced workers and those with HIV/AIDS to be shifted to help the addicted.

The president has said for weeks that he would declare the opioid epidemic a national emergency, but the declaration on Thursday is not that. A public health emergency has to be renewed every 90 days. White House officials reportedly said declaring a public health emergency was a better choice because it gives the Health and Human Services Secretary freedom to waive some regulations. It also frees up access to the Public Health Emergency Fund, but that account holds a mere $57,000. Trump is not requesting additional funding for the opioid crisis in Thursday’s announcement.

Grant Smith, the deputy director of the Drug Policy Alliance’s office of national affairs, said the Thursday announcement is an “important step in the right direction” but predicted there would be a lot of disappointment in the health community if there are no funds attached.

Andrew Kolodny, MD, co-director of the Opioid Policy Research Collaborative at Brandeis University’s Heller School for Social Policy and Management, says the White House’s Thursday announcement is not a plan to properly address the crisis.

“Everything that was mentioned today sounds helpful, but mentioning a few helpful items is not a plan,” he says. An appropriation of $60 billion over the next ten years would be more appropriate, he says: “We’ll know that [Trump] is serious about the opioid crisis if his announcement this afternoon includes an appropriation request.”

The White House has said it wants to see Congress include more funding for the crisis including in year-end spending bills. Democratic Sen. Bob Casey of Pennsylvania also introduced a bill this week that would provide $45 billion for opioid abuse prevention, surveillance and treatment over 10 years. The same amount was included in a Republican proposal to repeal the Affordable Care Act earlier this year.

The Trump Administration has been working to show the it is taking the opioid crisis seriously. Shortly after taking office, Trump formed a Commission on Combatting Drug Addiction and the Opioid Crisis. In August, the group recommended a national emergency declaration. It argued doing so would have given the President more authority to free up funds and “force Congress to focus on funding and empowering the Executive Branch even further to deal with this loss of life.” The report also called for expanded access to medically-assisted treatment and improvements in data collection and drug monitoring. The Commission will release a final report next week.

On Thursday, the President listed a number of steps the Administration is taking to address the crisis on all fronts. Trump called opioids “truly evil” during a speech at the White House. The Department of Justice recently announced a first-ever indictment against Chinese manufacturers of fentanyl and other opiates. The Administration is aggressively pursuing more indictments, the president said. The Food and Drug Administration has also requested that the drug Opana ER be pulled from the market because of the potential for abuse.

The president said the Administration is also looking for non-addictive alternatives to pain killers that can replace opioids on the market. Trump also said it is also launching an anti-drug ad campaign targeted at young people and touted his border wall as a potential blockade for drugs. “We want the next generation of Americans to know the blessings of a drug-free life,” Trump said.

Dr. Richard D. Blondell, professor and vice chair for addiction medicine in the University of Buffalo’s Department of Family Medicine, says Trump said a lot of the right things in the speech on Thursday though it was light on specifics. “The proof will be in the pudding,” he says.

Blondell says: “It’s like a bunch of kids drowning in a river — we need to go up stream and find out why they’re drowning in the first place. We need to do something so that doctors stop prescribing people into addiction.”

Dr. Lisa A. Marsch, the director, Center for Technology and Behavioral Health at Dartmouth College, says the attention the White House is putting on issue is helpful for broader efforts to inform the greater public about the perils of addiction. But, she says, resources are key.

“When you think of an emergency, if you had a fire burning you’d allocate resources to get the fire out,” she says. “We can’t just assume this is just going to solve itself without having a really focused, concerted, and intensive effort to resolve it.” 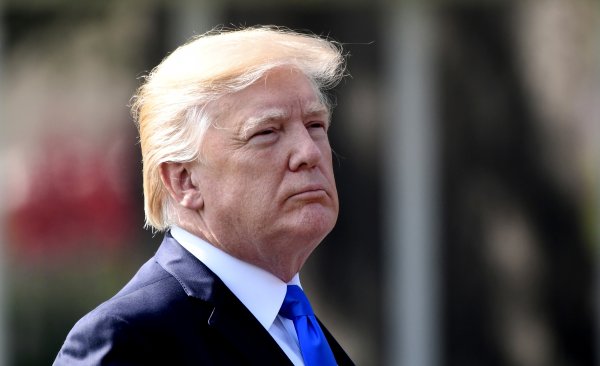 President Trump: Some Call Xi Jinping the 'King of China'
Next Up: Editor's Pick