Whether you’re travelling in first class or economy, you’re probably always looking for ways to make flying as comfortable and enjoyable as possible.

However, while we may often think the best way to do this is to spend money on more leg room, a special meal, or even an upgrade, it turns out all we need to do is pay attention to the cabin crew.

In a recent blog post for Flyertalk, JetBlue flight attendant and columnist Amanda Pleva gave an honest account of what it takes for her to treat a passenger well — and it all comes down to how she is treated by them.

Read more: 6 airline industry secrets that will help you fly like a pro

“You know what the worst part of my job is? It isn’t cleaning up vomit or dealing with an angry passenger yelling in my face, which is what most people assume,” she wrote.

“It is when I stand at the aircraft door greeting people and get ignored. To have someone clearly see me and ignore my ‘hello’ and walk on by is the most dehumanizing experience.

“It sounds trite and probably is, but all these years later I can’t get past the icky feeling of having someone not even think I am worth a simple ‘hi’ or even just a quickly flashed smile.”

She added: “As a paying customer, it isn’t your job to be friendly to me or to walk on eggshells, lest I come by and smack you upside the head with a safety information card. The role of the passenger is merely to follow the safety and security rules enforced by us onboard.

“But should you be an entitled jerk? Of course not.”

She was inspired to write the post after a Los Angeles Times article claimed that the majority of people feel that business and first class passengers are treated with more respect than those in economy.

“I read through the findings, and the more I thought about them, the more I analyzed these perceptions, and how they might be changed,” Pleva said.

“To start with, I don’t know many flight attendants who view premium-class passengers any differently because of financial status. Our line of work isn’t known for being the most lucrative anyway, so we would really have no business passing judgment on others for not having a spare $3,000 for a seat.”

“However, I would clearly be lying to you if I said that most of us didn’t prefer first-class passengers to economy.”

This is because, according to Pleva, it’s first class passengers who are most likely to say “hello.”

Read more: The 6 things you need to do to beat jet lag, according to flight attendants

“Perhaps it’s because, in economy, people expect to disappear,” she added. “They expect less interaction, and they’re right to expect that — with more people to serve, we simply don’t have the time to be very one-on-one with an entire plane full of people. That has nothing to do with class or status, it’s simply time constraints.

“Having fewer people to serve in first or business class gives us more time to establish a personal connection with our passengers. Because of that, I think they’re more likely to be polite to us. When people don’t feel anonymous, they act differently. I am sure it’s the same for us as well.

She added: “But you would be amazed at how far politeness and friendliness goes. Even if you don’t think we notice, we do. And it gets returned whenever possible — maybe it’s a free drink, maybe we tap you on the shoulder and shoo you into an empty row. Or maybe it’s just extra-attentive service! But we always appreciate a friendly face, and word usually spreads among the crew when people are especially kind.”

She stressed that this doesn’t apply to all flight attendants — and some are simply impatient. However, it is often the way they are treated by passengers that makes them so.

“I can’t say I do my best job when people are rude to me,” she added. “I can handle it and I still treat those people with kindness and respect (I can’t say I don’t mock them in the galley, however), but I am certainly not at my best.”

Read more: How to avoid sitting next to a baby on your next flight

“Merely being spoken to in full sentences versus having “COKE!” shouted at me with a mouth full of Chex Mix and headphones on (especially when their response is to an entirely different question) is enough to make me want to better than my best. And that’s regardless of the seat you occupy.” 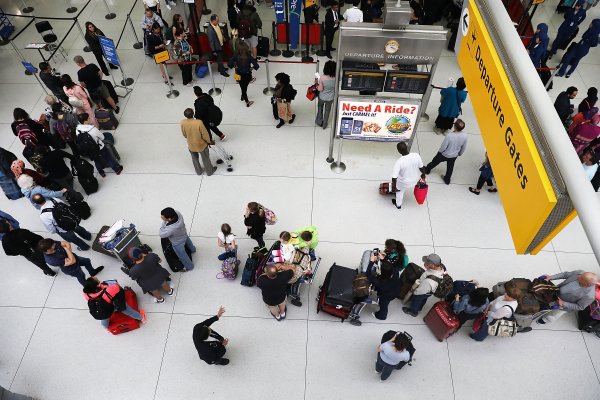 New Security Measures Could Delay You at the Airport. Here's What to Expect
Next Up: Editor's Pick