Bill Nye is perhaps best known for the zany persona he cultivated for years as a science educator — always filled with cheer for the subject matter at hand. But that fun zaniness disappears in the new documentary Bill Nye: Science Guy in a moment bound to send a chill up the spine of anyone who believes that American students should learn basic science. In the film, Nye confronts famed creationist Ken Ham as he undercuts evolution in a conversation with an elementary school-age child at Kentucky’s Creation Museum.

“Young woman, I would say to you that there’s a process that humans have developed over millennia by which we know nature and we call that science,” Nye says. But the girl tells Nye she doesn’t buy it.

Nye told TIME ahead of the documentary’s release that he’s optimistic about the future of science in America as younger generations replace their predecessors in places of power. But still, the incident — like many scenes in the film — is a wakeup call for viewers. “My biggest concern is that this idea that one’s own opinion is given the same weight as what’s scientifically understood,” Nye tells TIME. “We want to be able to get people to evaluate evidence and think critically about events and phenomena they see in nature.”

Nye has spent the last two-and-a-half decades trying to do that as a science educator, first as the host of his popular television show Bill Nye the Science Guy and now as a ubiquitous science commentator. The influence of anti-science forces in American society has increased in that time in large part due to a concerted push from some industry groups. President Trump has endorsed many of those views, questioning mankind’s role in global warming and suggesting before taking office that climate change is a “hoax” created by China to gain a manufacturing edge. Since his inauguration, he has declined to speak in detail on the topic.

Even with Trump in the White House, and even as outliers like Ham and his followers remain a potent force in some places, Nye is optimistic that younger generations will increasingly embrace science. Still, the question remains whether that change will come fast enough as the threat of climate change looms and governments around the world struggle to address it, Nye says. “As what I hope is the last gasp of the anti-science movement, we have this extraordinary administration with extraordinary people heading up the Department of Education and Environmental Protection Agency,” says Nye. “But that’s going to pass.”

How to address people who spread misinformation — or whether to ignore them altogether — is a challenge that faces anyone who communicates about science to a mass audience. And the documentary, which opens this Friday in select theaters, shows the debate over whether Nye should engage Ham and risk bolstering his image. But Nye insists that taking on science skeptics directly is the best way to change minds. He debates Ham on the topic of evolution and walks through the creation museum, pointing out misleading exhibits (no, humans and dinosaurs did not live at the same time).

Ultimately, Nye says, it’s the only way. “If we were talking about climate change the way we discuss whatever happened in Niger or the president’s extraordinary tweet of today,” says Nye, “we would be doing something about it.” 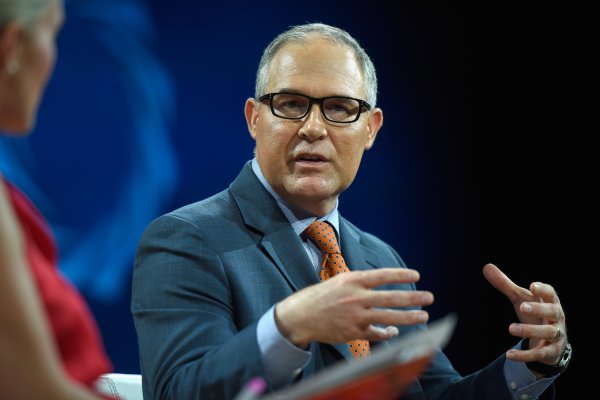 Scott Pruitt Is 'Hell-Bent' on Dismantling EPA Rules
Next Up: Editor's Pick