Khloé Kardashian and Tristan Thompson Are Expecting a Boy

The Keeping Up with the Kardashians star, 33, and her NBA beau — who have been dating since September 2016 — will welcome a baby boy together early next year, multiple sources confirm to PEOPLE.

This will be Kardashian’s first child. Thompson, 26, has a 10-month-old son named Prince Oliver from a previous relationship with his ex-girlfriend Jordan Craig.

As PEOPLE previously confirmed in September, the pair are over the moon to become parents.

“Yes, Khloé and Tristan are expecting and they are absolutely thrilled,” a source revealed at the time. “This isn’t something they were in a rush to announce to the whole world, and it’s only been in just the past week or so that they’ve felt comfortable telling most of their inner circle.”

“This is something Khloé has wanted for years and years and yet it’s more than that: She didn’t want it unless she was in the right relationship for it,” the insider added. “She never let it happen with Lamar, intentionally, and she never considered it with James or French or anyone else she has seen.”

“But this is such a wonderful moment for her: not only is she going to be a mother, she is going to be raising a child with a man she truly loves. Everyone is over the moon for them both.”

Kardashian’s pregnancy news came days after sources confirmed to PEOPLE that Kylie Jenner and boyfriend Travis Scott are expecting a baby girl. She is due in February.

Kim Kardashian West and husband Kanye West are also expecting their third child — a daughter — in January after hiring a surrogate to help them expand their family.

Both Kardashian and Jenner, 20, have yet to confirm their baby news. Kardashian West, 37, spilled the beans about her little one on the way in the 10 year anniversary season trailer for KUWTK.

Kardashian and Thompson first stepped out together in early September 2016, and have been spending much of their time together since then in Cleveland. Aside from New Year’s Eve, the pair also celebrated Halloween, Thanksgiving and Christmastogether.

The reality star, who rang in 2017 in Miami with the Cleveland Cavaliers center/power forward and a group of friends, used Instagram to share a photo of the couple celebrating on New Year’s Eve.

“Happy New Year!!! May you always be surrounded by the love you are deserving of! May God’s blessings continue to rain on us all!” she captioned the snap of Thompson embracing her.

Though the couple isn’t engaged, Kardashian opened up to ES Magazine in April about the possibility of tying the knot with the sports star, admitting she would say yes if he popped the question — and is excited about the prospect of starting her own brood.

“I would love to have a family. We’ve talked about it,” she revealed. “He [already] is a father, and I know for a fact that he would be an impeccable father.”

Added the Revenge Body star at the time, “I definitely want to be a mom. But I don’t put the pressure on it. It’s not like, ‘The clock is ticking.’ I feel in my soul it will happen.”

The two “talked about starting a family” together too, as Kardashian admitted on her E! reality show’s season 13 finale.

“He wants to have about five or six kids with me and that’s lovely,” said Kardashian, who learned in the episode that her uterus looked normal after an initial fertility scareleading her to cease taking birth control. “We could start at one and we could grow from there. But now knowing I’m not on birth control is scary. It’s like a really big step.”

“I am so relieved to know that I am able to get pregnant,” she explained in her sit-down. “Now I have so many other things to think about. Do I wanna have my own baby now? I don’t know. I’m at a crossroads.”

Kardashian and Thompson remain “insanely happy and in love,” a source close to the mom-to-be told PEOPLE exclusively in January. And in a post on her website that month, she reflected on how peaceful she has felt since they began dating.

“It’s such a great feeling that I have my happy back! It’s from a genuine place and the most peaceful place I’ve been in for longer than I can even remember,” Kardashian wrote.

“I think when you’re in love you definitely feel happy and healthy too,” she continued. “I like that my relationship is very normal and doesn’t need to be so publicized all the time.” 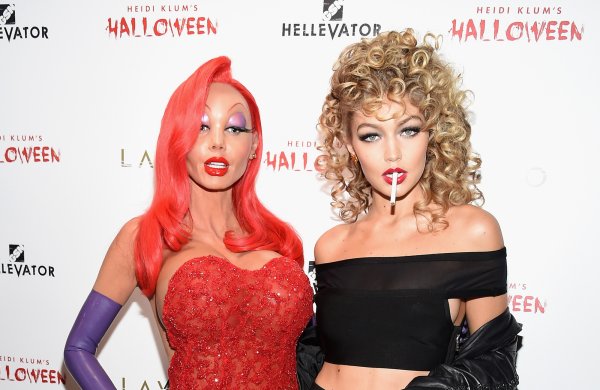 The Celebrity Costume Hall of Fame for Heidi Klum's Annual Halloween Bash
Next Up: Editor's Pick