In theory, the Republican Party’s proposed legislation for tax reform is easier than health care: It would cut various taxes paid by the wealthy and reduce rates for individuals and corporations. While certainly complex, the tax code is easier to change than the health care system, where each part relies on another.

But Republicans are already finding that their tax reform proposal is trickier than it seemed at first.

The latest trouble is something called the State and Local Tax Deduction. This is a pretty straightforward part on your tax return: You get to take whatever you paid in state income tax (or, less frequently, sales tax) and deduct that amount from your taxable income, which lowers your tax bill.

About 43 million people took advantage of the deduction in 2013, making it the most popular itemized deduction in the tax code, according to the Tax Foundation.

But blue state Republicans revolted. Because state taxes are higher in places like New York and California, their constituents are much more likely to be hurt by this change.

On Wednesday, House Speaker Paul Ryan signaled that he’d heard their tax complaints, acknowledging for the first time publicly that the so-called SALT deduction might remain on the books after all. It could still be cut back or capped in some way.

And the State and Local Tax Deduction isn’t the only vulnerable part of the Republican’s tax reform proposal, which aims to sweep away most deductions other than the ones for interest on your home mortgage and charitable giving.

Already, a plan to dramatically cut the amount of money you can put in your 401(k) each year was shot down by President Donald Trump, who tweeted that it was a “great and popular middle class tax break” and that there would be no change. (One top House lawmaker working on the bill said they might still make changes.)

Every part of the bill that saves the government money — such as eliminating these various deductions — has a constituency that will fight for it. And every part of the bill that costs the government money — such as getting rid of cleverly branded institutions like the estate tax, the gift tax and the alternative minimum tax — has strong support from Republican lawmakers and their donors, such as the Koch brothers network. There’s a billion-dollar lobbying industry in Washington that trades in inertia.

The only other options, then, are to increase the amount the bill contributes to the deficit in the near term, which would concern some deficit hawks in Congress but maybe not enough to cause them to vote against the bill, or to set some of the tax cuts to expire in 10 years, which would mean creating a political headache down the road. Because the tax proposals are tied to the budget plan, there are limits about just how much red ink can be in the mix, especially after the first decade.

At a news conference, Ryan said that he believes the overall bill will boost the U.S. economy, and that will help sell the bill in Congress.

“The general interest so clearly will and needs to triumph over the special interests,” he said.

But that may be easier said than done, especially in today’s fractured political environment. Everyone believes in the general interest, after all, but we’re all special interests on something. 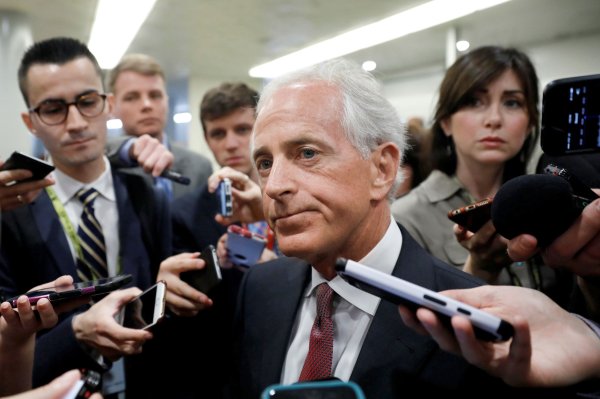 President Trump Called for Party Unity, Then Attacked a Republican Senator
Next Up: Editor's Pick