Meet the Major U.K. Band You've Been Missing Out on for Decades

Stereophonics have been making hits together for 25 years. With six U.K. number one albums under their belt and a new one, Scream Above the Sounds, on its way to becoming their seventh, the Welsh rock band are right up there alongside groups like Oasis and U2 with their consistent chart success and stadium shows — even if they haven’t yet become a household name stateside. You may not know it by name, but you’ve probably heard the easygoing chords of 2001’s “Have a Nice Day”, the catchy melody of 2005’s “Dakota” or the toe-tapping refrain of 2015’s “C’est la vie.”

Lead singer-songwriter Kelly Jones and bassist Richard Jones (no relation) go way back to elementary school, when they were just kids in a small town in Wales banging around on their instruments on weekends. “We made a big noise for three people,” they laugh now, referring to their sessions with founding drummer Stuart Cable, who passed away in 2010. The trio grew addicted to playing at local pubs and clubs, inspired by acts as diverse as Bob Dylan and Soundgarden, and their ambitions soon grew.

Instead of falling in line with trends like grunge or Britpop, however, they stuck to a more classic sound. Their music has always been about “small town stories,” Kelly explains. “It had a kind of punk energy and a country slant to it.” Scream, their tenth studio album, is a rich addition to their catalogue of honest rock grounded in real-life storytelling and relatable melodies. One example: the track “All In One Night,” a tale of everyday struggle that recalls Pearl Jam in its melodrama, specificity and feel. That timelessness has helped Stereophonics resonate across generations. In recent years, bolstered by digital discovery platforms, they’re seeing a resurgence — and unexpected diversity — in their listeners.

“It’s amazing that people in places far away, whether it’s Shanghai or whatever, discover our music for the first time. And then there’s 2,000 people in a field in Kuala Lumpur singing all our words back at us. Literally, I’m like, ‘What the f-ck?’ That’s mind-blowing, really,” Kelly says in disbelief. Plus, they’ve gotten better at being rock stars: “The gig used to get in the way of the bender, but now we actually love being onstage.”

Kelly and Richard sat down with TIME to discuss the way the music world has changed over the past two decades, how they’ve eased into a new phase of life and why their songs are finding new fans today.

TIME: You’ve been doing this for a long time. What’s changed about how you guys make music now?

Kelly Jones: The main thing that’s changed in recording and writing is that we just got our own place in London. And we go to work, really, every day. It’s a completely different way of working. It’s like if you were a painter, and you do loads of painting, and you just pick which paintings you want to exhibit. It’s a much nicer, freer way of making work; you’re not limited to anything, and you can make these cool, weird little albums.

Richard Jones: You just go down to the studio and make some music.

And you’re all friends still?

Kelly: We are actually a band that likes each other. Shocking, I know. We do a lot of drinking and eating and wining and dining, you know.

I imagine the quality has improved over the years.

Kelly: The quality has improved. We have a good time. There’s a good sarcasm and a camaraderie that comes after being in a band. And we’ve known each other forever. We’ve never been a band that fought or argued. As a songwriter, I’m really happy that the boys support me and contribute and that, but I’ve always wanted to be under the band Stereophonics.

Richard: We’ve all got the same goals. We just want to get the band into as many people’s houses and get as many people to come see us live. That’s all we’ve ever wanted.

What’s the secret to your consistency in putting out work — and in having a positive reception from your fans?

Kelly: I think the songs are honest. Every song I’ve written, it’s about what I’ve gone through, good or bad. It kind of comes out of me, and I’m grateful for that. I’ve got friends who are back home who’ve got no way to express that, and they’re kind of in a different position in life. It’s alarming to me that I’ve written something on my bedroom floor when I was 19 or something, and then there’s 50,000 people that know the words, and they’ve got a similar feeling. If you thought about it too much, your head would blow up.

Richard: And not being constrained by the genre of music. We want to find out new ways of saying something through music. If there’s new technology that can make a new sound, we’re not afraid to try it. On this album, there’s three songs there’s not even a band playing on it.

Kelly: We’ve been lucky to tour with a lot of amazing people. We did Bowie’s last tour in America. We learned a lot from that, a guy constantly moving forward, changing his set list based on the different places he played. If you repeat what you did in the last one, the likelihood is it’s not gonna be successful twice. People are nostalgic about a particular record, because it’s about the time when they were listening to that record. But if you do it again, they’re like, I’m not that guy anymore.

What have been the biggest challenges for you in recent years?

Kelly: It’s a long time to maintain what you’re doing, and to live up to your own expectations. Obviously [bandmate] Stuart [Cable] passing away was hard, he was like our brother. To maintain a consistency when people come to see the band takes a lot of work; it takes a lot of discipline. I go to the studio every day and sing and play. I never did that when I was, like, 30. I’d probably have a drink and walk on — and see what comes out. But now if there’s ten albums’ worth of material people are coming to hear some of, and they’ve paid money for a ticket, you become a different person when you go on and you want to give the best show you can. You want to be better at what you do.

Richard: And you can enjoy it more as well, knowing that you’ve got that confidence behind you and people are there to see that back catalogue, it’s even more fun.

Who are you looking to appeal to now with the new album?

Kelly: It’s not dependent on the politics of a radio station anymore. People are making their own minds up out of what they want to listen to now, and I know that I’ve got a great collection of songs.

Richard: And you’ve got direct contact now through streaming and all the social media.

Kelly: I guess we just feel, f-ck it. We’ve got a great bench of songs, and the people have a really good time at our shows. People are the same all over the world. If we can play football stadiums and arenas in one country, there’s no reason we can’t play them in another country. People are people.

Did you ever doubt that you would be able to have a career with this kind of longevity?

Richard: We never wanted to release a couple records and be the biggest band in the world for 10 minutes. We always wanted to stand the test of time, and make great music that people would want to listen to and that music lasts. We’d looked up to artists and bands that had big back catalogues, maybe Bob Dylan, Neil Young, the Eagles.

And now, do you feel like you can do this forever?

Kelly: I don’t really know how to do anything else. But I do. I’ve never felt more comfortable doing it. When I was put into arenas and stadiums when I was 27, I always thought somebody was going to say, ‘No, they’re not here for you.’ You don’t quite believe that they actually like you, because it’s an extreme change in your life. Which is insane really, because they bought the ticket. So you start feeling more comfortable in your skin the more you do something, or the older you get.

Some people say we’re in the middle of a crisis of rock. Is rock dead?

Kelly: I don’t know if rock’s dead. I’ve seen the cycle come and go many times just in our experience. I guess you just keep doing it, and it comes around when it comes around. The radio stations do what they do and the media do what they do, but I’m sure there’s some angry kid in a garage somewhere that’s gonna come out with something, and we’ll all go, ‘Oh f-ck, what’s that?!’

Richard: Like Kelly said, the cycles just come round.

Kelly: The culture’s changed massively. The kids are different, with the phones and stuff. Even if you like a song, you don’t really know who the artists are, it’s a lot more faceless, it’s a lot less tribal. When we were growing up it was much more tribal — it was rock, it was grunge. Now people like songs, [but] they don’t necessarily know the song’s origins. I don’t know how you would feel angry at the world, or distressed, because most people are constantly distracted or consumed. There’s not many people looking out of a car window bored. I think you have to empty your head for something good to come into it. If it’s constantly full of distraction, it’s very unlikely you’ll become the next Picasso. Since you’ve just been looking on your phone all day. Maybe something amazing will come of that, I don’t know. But at the moment, it’s a work in progress. 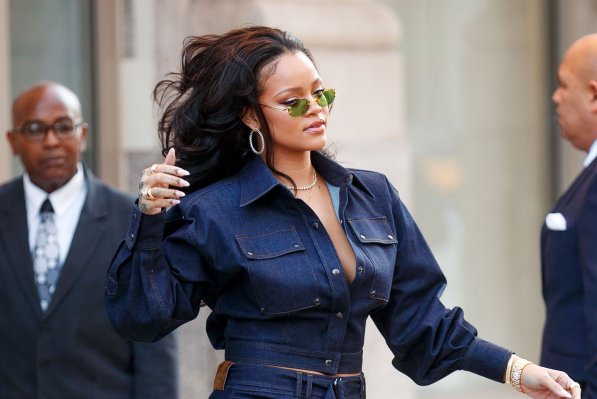 Listen to Rihanna Rap About the Paparazzi and LeBron James on N.E.R.D's New Single
Next Up: Editor's Pick