In addition to quoting The Federalist and Abraham Lincoln in his Tuesday afternoon speech about his decision not to run for reelection in 2018, Arizona’s Sen. Jeff Flake turned to an anecdote from President Theodore Roosevelt.

Speaking about the relationship between the president and the citizenry, Flake noted that Roosevelt had been clear on the need for the public to be able to criticize the chief executive — something Flake has made news for doing recently.

“The President is merely the most important among a large number of public servants. He should be supported or opposed exactly to the degree which is warranted by his good conduct or bad conduct, his efficiency or inefficiency in rendering loyal, able, and disinterested service to the nation as a whole. Therefore, it is absolutely necessary that there should be full liberty to tell the truth about his acts, and this means that it is exactly as necessary to blame him when he does wrong as to praise him when he does right. Any other attitude in an American citizen is both base and servile,” Flake quoted Roosevelt as saying. “To announce that there must be no criticism of the President, or that we are to stand by the President, right or wrong, is not only unpatriotic and servile, but is morally treasonable to the American public.”

This passage is apparently a favorite of Flake’s, as it also appears in the Senator’s buzzy book, Conscience of a Conservative. “Teddy Roosevelt wrote those words while the United States was embroiled in World War I, in case anyone thinks that even a wartime president is immune to criticism,” he adds in the text. “Roosevelt knew that paying obeisance to power — regardless of how well intentioned — is a danger to our balance of powers and the opposite of conservatism.”

Roosevelt’s ideas on the topic have been a rallying cry for many over the last century, and they should be unsurprising for those familiar with that president’s personal history — especially because Roosevelt was not president when he wrote those words.

The source for the quotation is a piece that Roosevelt wrote for the Kansas City Star in May of 1918. (He used very similar phrasing in other pieces he wrote around that time, too.) Roosevelt wrote regularly for the Star during World War I, until shortly before his death in 1919.

At the time, and throughout the war, Woodrow Wilson was in office. Roosevelt’s time in the White House had ended in 1909, though he had run again against Wilson in 1912 under the third-party “Bull Moose” banner. He lost the race but, as war began to sweep through Europe and Wilson held steadfastly to neutrality, the rivalry between Roosevelt and Wilson continued.

As Wilson campaigned for reelection in 1916 on the promise of keeping the U.S. out of the fight, Roosevelt got involved in training civilians for combat just to be prepared. And, when the U.S. did enter the war in 1917, Roosevelt tried (and failed) to get Wilson to let him lead troops personally. Roosevelt’s sons joined up; one of them, Quentin, would be killed shortly after Roosevelt wrote the words in question.

Throughout this period, the former president was a frequent critic of the sitting president. The event that prompted him the write the passage in question was the Sedition Act of 1918, which criminalized the publication of “disloyal” statements about the U.S. government. While Roosevelt did not oppose such a law in theory, he noted, it only worked in the U.S. if it was properly directed and also guaranteed freedom of the press, including the papers for which he was a regular columnist. Acting against the country or the war effort was sedition, he believed, and should be punished. His definition, which extends to examples such as opposing the draft, was in fact an expansive one. But if the President were the one getting in the way, he added, the people had to have the ability to say so.

“Nothing but the truth should be spoken about [the President] or any one else,” Roosevelt wrote. “But it is even more important to tell the truth, pleasant or unpleasant, about him than about any one else.” 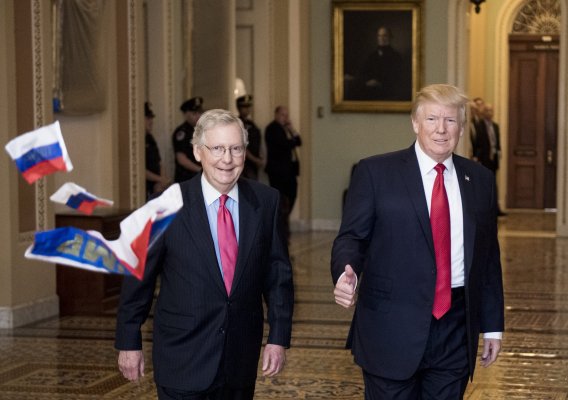 'Trump Is Treason.' See the Moment a Protester Threw Russian Flags at the President
Next Up: Editor's Pick