Camila Cabello is not shying away from the drama. Instead, in her new music video for the sultry song “Havana,” the former Fifth Harmony singer amps it up by playing the lead actress in a campy telenovela, the star of an old-school romance film, and a regular, bespectacled girl inspired by the fiery personas of her onscreen alter egos.

The video, which features popular social media personality Lele Pons as her party-ready sister and LeJuan James as her doting grandmother, is directed by Dave Meyers, who’s also behind the rich visuals of Kelly Clarkson’s “Love So Soft” and Kendrick Lamar’s “Humble.” In the mini-movie, Meyers lets Cabello explore a comedic side in its opening parody of a telenovela before she is snapped back to her more mundane reality. But not for long: after a pep talk from her abuelita, Cabello heads to the movie theater. There, she finds herself portrayed onscreen as a sultry dancing vixen in a 1920s-inspired red flapper dress, accompanied by rapper Young Thug. Cue the sharp choreography at a smoky nightclub.

As the movie finishes and regular-Cabello complains of the lack of fairy tale ending, her alter ego has a choice suggestion: “Hey sweetie,” she announces, breaking the fourth wall, “if you don’t like my story, go write your own!” Which, thanks to a serendipitous encounter on the street, Cabello is more than happy to do.

“Havana,” co-produced by Pharrell Williams, was first released in August. It’s off the singer’s debut solo album, The Hurting. The Healing. The Loving, which is expected to drop before the end of the year. Watch her take on these multiple personas, above. 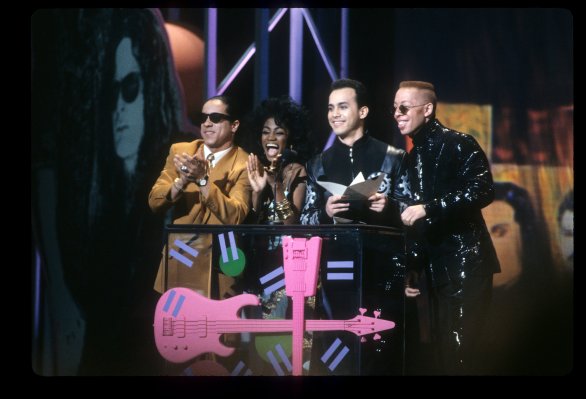 Man Fined For Singing Everybody Dance Now
Next Up: Editor's Pick