Stranger Things Finally Gave Us Answers to These 10 Pressing Questions

At the end of season 1, fans wanted to know Eleven’s whereabouts and where the other Hawkins Lab kids were. And did Will bring some wild things back with him from the Upside Down? What other bad stuff is lurking around down there? Most importantly, how did Steve get his hair to do that? Just like the Hawkins Middle School science teacher you wish you had, season 2 served up plenty of helpful explanations. Fans thankfully learned a lot more about the show with the coolest supermarket exit ever after it dropped on Friday.

1. The Demogorgon’s not the only monster in town

Good old flower face really had us upset in season 1. But its countless children unleashed more havoc in season 2. The Demodogs killed our superhero martyr Bob (Sean Astin) as well as numerous Hawkins lab workers with a major assist from Will (Noah Schnapp).

Another thing? We know how Demogorgons grow. Quickly. They also enjoy long runs through tunnels connecting the lab to other areas, deli meats, 3 Musketeers, oh, and destroying human and animal life. Oddly enough, they can bond with humans, as Dart and Dustin (Gaten Matarazzo) proved.

When Eleven (Millie Bobby Brown) accesses Terry’s (Aimee Mullins) recollection of her labor via that blacked out space, the trippy flashback reveals that Terry did give birth to a crying Eleven a.k.a. “Jane.” Hawkins Lab took her from Terry, possibly for experiments and to weaponize her against Russia. Terry tried to rescue Eleven out of the lab, but that’s when Dr. Brenner (Matthew Modine) gave her some form of electroshock therapy that likely caused her current damaged state. As her sister is shocked to learn, Terry’s not crazy. This really happened. Further evidence: Dr. Owens (Paul Reiser) also appears to produce the receipts in the form of a birth certificate for Hopper (David Harbour.) And a new name! “Jane Hopper.”

3. Yes, there are others

In season 1, Eleven was identified by the number given to her by Dr. Brenner, begging the question: who were the others? We meet one — Kali (Linnea Berthelsen) a.ka. “Eight” — who Eleven finds living out her best life with her squad. Her power is that she can make people see — or not see anything — which is convenient when you’re on a revenge mission. On the positive side, she can also whip up a butterfly illusion on loan from The OA like it’s nothing. This sets up a future where we’ll likely meet the other victims of Dr. Brenner.

4. The kids have have families

Look! Dustin has a mom he has a hilarious time with! Look! Lucas (Caleb McLaughlin) has a mom, a dad who knows his place and a precocious sister Erica (Priah Ferguson) who should not be trusted with crucial communication devices. Back in season 1, we did see the kids’ relatives at Will’s premature funeral but season 2 delved so much deeper into the home life “dimension.” Sure, the mission to Find Will got most of the onscreen attention in season 1. But we learn Nancy (Natalia Dyer) wasn’t the only one aware that Barb (Shannon Purser) existed. This season proves that Barb’s parents cared, still care and even sold their house to pay a disgraced journalist Murray (Brett Gelman) to keep hope alive in the form of a conspiracy-laden but not totally off investigation.

It’s not some type of PTSD vision, a possibility creators Matt and Ross Duffer hinted at previously. It’s real. It sent its offspring to kill the lab workers. It invaded Will’s body and controlled his mind. It lurked ominously around the Snow Ball in the Upside Down. Worst of all, it messed with the pumpkins during peak pumpkin season. (The tunnels likely poisoned the farmland.) This list goes on with this repeat offender. Dustin drew a parallel between it and the Mind Flayer from Dungeons and Dragons, and Dustin always knew what he was talking about, even when it came to D’artagnan. Now fans know more about what we’re dealing with.

6. Eleven has the power to close the gate, and it helps if she’s pissed

Eleven is back and tougher than ever. For awhile there, people were worried she died, sacrificing herself to kill the Demogorgon in the season 1 finale. But in season 2, she proves she’s still a powerhouse who can channel her energy and her rage to close the gate with her mind. As though that weren’t sufficiently impressive, she also debuts three completely new looks: rustic cabin Eleven, punk Eleven and romantic Eleven.

Fans wondered what the extent of Hopper’s government involvement would be, and we have our answer for the most part. Hopper was able to cut a deal to rescue Will in exchange for everyone’s silence in season 1. In season 2, Jim “All Out of Screws to Give” Hopper was reporting to Dr. Owens and covering up the craziness. In season 1, we learn he rescued Eleven from the woods some time around Dec. 10, 1983 based on Eleven’s calculations. When things get really nuts, he quickly reteams with Joyce and the kids to save the town. Hopper’s a tricky one, but it seems like he’s on the good side for now.

8. No, Will’s definitely not OK

Was Will saved? Not completely. Will survived, but not unscathed. The destructive monster invaded his body as its new host so it could use the poor kid to spy on everyone. This new host-guest arrangement resulted in a high death count around town. Another thing: It also tragically ruined what should have been a really relaxing bath time. Mrs. Wheeler (Cara Buono) more than made up for this in the finale.

10. Yes, Nancy ended up with Jonathan

Nice guys don’t always finish last unless you’re Bob. Thanks to a push from the relationship counselor Indiana needed, Murray Bauman (Brett Gelman), Nancy and Jonathan (Charlie Heaton) realize they want to be with each other and spend the night together at Bauman’s house. It would appear that Nancy’s thing with Steve is over. This season should lead to another sobering revelation for both Steve and Dustin. A few puffs of hair spray can only take a man so far in life. 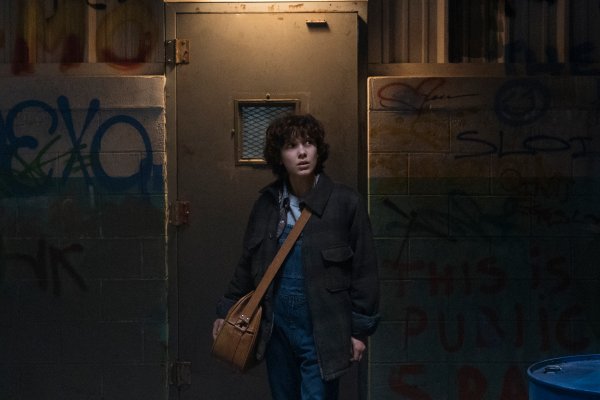 Here Are the Stranger Things Theories the Internet Is Obsessing Over
Next Up: Editor's Pick