The Most Hilariously Spooky Halloween Pranks That Went Viral

As Halloween fast approaches, many lovers of the spookiest day of the year are gearing up by devising costumes, watching scary movies and eating inordinate amounts of candy. But there are also those who revel in the potential for pranks that Oct. 31 presents.

Of course, when someone pulls off a particularly hilarious gag, it often ends up on the Internet for all to enjoy.

From innocent antics to spine-chilling tricks, here are six of the funniest viral Halloween pranks of all time.

The Babadook crashes a wine party

Before the Babadook — a top-hat-wearing ghoul from the 2014 movie of the same name — became widely recognized as a LGBTQ icon, the ghastly bogeyman was turned into a meme by Twitter user Katie Dippold when she shared a photo of herself dressed in his likeness at a party where no one else was in costume.

“Tbt to Halloween when I dressed as the Babadook but my friend’s house had more of a grown ups drinking wine vibe,” she captioned the hilarious shot.

As per usual, the Internet’s response to the picture didn’t disappoint. User David Sanchez took to Twitter the following Halloween to share a photo in which the roles were reversed. “Tbt to Halloween when I went to my friend’s house for a grown ups drinking wine party but there was more of a babadook vibe,” he wrote.

There’s no greater menace facing young trick-or-treaters today than Jimmy Kimmel, who annually encourages parents to film their children’s reaction to the overnight disappearance of their entire store of Halloween candy. The late night host releases a video supercut each November of kids melting down upon hearing that their moms and dads ate all of their hard-earned sweets.

Dementor on the loose

After Twitter user Zac Crueger shared photos of his uncle’s drone touting a Grim Reaper-esque figure through the skies of southern Wisconsin in October 2016, some began comparing the flying skeleton to the soul-sucking Dementors of Harry Potter fame.

“Good thing I’ve been working on my Patronus charm,” replied one user, referencing the spell that wards off Dementors in J.K. Rowling’s series.

Leading up to the release of the 2013 remake of the classic horror flick Carrie, customers who visited Manhattan’s ‘Snice coffee shop were treated to quite the mind-bending experience. With the help of a fake wall and some rigging, actors were able to convince a number of patrons that they were witnessing a telekinetic freakout for the ages.

Watch the video — which has been viewed nearly 68 million times — below.

Head in a jar

Using just a print-out of his face, some green-tinted water and a big old jar, one brave man set out to convince his wife that his head had been removed from his body and left on a shelf in the fridge for her to find. Photos of the eerily realistic finished product were widely enjoyed on the r/creepy subreddit.

Although this gag was executed in April not October, it’s definitely still a Halloween prank at heart. After his significant other fell asleep on the couch watching TV, YouTube user James Williams went to great lengths to convince her the long-haired ghost of Samara from The Ring was climbing out of the screen. Her reaction was, as expected, priceless. 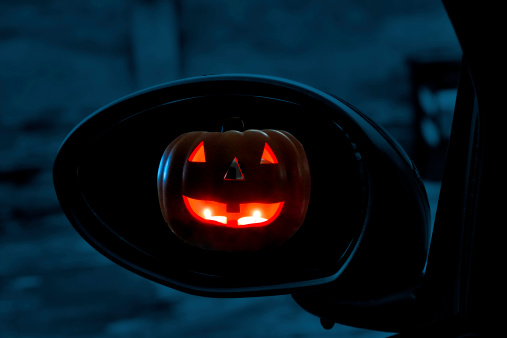