Affairs Are Only Human — But That Shouldn't Be Your Excuse

Malte Mueller—fStop/Getty Images
Ideas
By Belinda Luscombe
Luscombe is an editor-at-large at TIME and the author of Marriageology: The Art and Science of Staying Together.

In 2016, three-quarters of Americans believed that it is always wrong to have sex with “someone other than your spouse.” Exactly the same proportion felt that way in 1991. In the same quarter century, the number of people who think it should be easier to divorce rose by a third. Meanwhile, approval of same-sex marriage has increased about fourfold, to 68%. Much of the definition of marriage (how long it lasts, who it’s with) has changed — just not our view of the cheaters.

So it’s a brave woman who will stick up for the adulterer, suggesting that satisfying one’s sexual hungers — even at great cost to a loved one — is understandable and advancing the notion of a “no-fault affair.” Such is the task undertaken by Esther Perel, a controversial couples therapist and TED Talk star, in her recent book The State of Affairs: Rethinking Infidelity.

Most couples’ therapists encourage more interpersonal honesty and harmony as a way to increase boudoir ardor. But in her first book — the 2006 bestseller Mating in Captivity — Perel, the daughter of Holocaust survivors, counseled distance, seeing partners through others’ eyes and exploring the dynamics of power to stimulate desire. While the standard sexual advice is to put a partner’s pleasure first, she encouraged “ruthlessness” in bed.

Perel now argues that while infidelity is a betrayal, that convenient label ignores unsettling questions about whether we are being realistic in our most intimate relationships. Drawing from her interactions with the couples she sees in her practice, she lays out some mitigating factors: Can the guy whose wife with Alzheimer’s can’t remember him have a girlfriend? Is watching Internet porn equivalent to paying for a personalized online performance? Is breaking up an otherwise happy family because its progenitors are sexually incompatible really better for everyone than having a secret side-lover? Perel also points out that not all the unfaithful come from unhappy marriages, or are sex-addicts or just jerks. “Sometimes when we seek the gaze of another,” she writes, “it isn’t our partner that we have turned from, but the person we have become.”

While Perel excels at setting the cat among the pigeons, she’s less deft at mopping up the gizzards. Her solutions to bedroom betrayal are nearly all cuckoo. She suggests that one wife build an altar to her husband’s paramour, to remind her of how the other woman reinvigorated her marriage. She notes that some couples find that jealousy provokes desire and “use others for a libidinal reboot.” She ventures that it might be worth trying some form of “consensual non-monogamy” even though the couples who do that still end up in therapy with a whole different set of equally confounding troubles. “Monogamy is impossible,” Francois Truffaut said, “but anything else is worse.”

The problem Perel never seems to grapple with is that loving someone is incompatible with hurting them. As parents tell their kids: whether you hit your friend by accident or deliberately, it still stings pretty much the same. The simple question at the heart of committing to somebody till death is whether you can value that person’s needs ahead of your own. The answer is often no, because we’re only human. But to love is to make the attempt.

Moreover, Perel doesn’t acknowledge that people who love their partners and still cheat don’t just betray their families. They often find they’ve betrayed themselves. A Norwegian study published on Oct. 20 reports that people who imagine they’ve slept with someone else struggled more to believe they could be forgiven than their partners did to believe they could forgive. Part of it, the researchers write, is that adulterers seek to overcorrect because the cost of losing the relationship is so high. But self-perception theory suggests another factor: that for most of those who cheat, their own behavior doesn’t accord with their values. The person they’ve become is not who they think they are.

No, monogamy is not natural. But neither is decoding the genome or auto-racing, and nobody thinks we should abandon those endeavors. Perhaps the real value of Perel’s book is as an invitation to resist judging others’ marital car-crashes. A failure of fidelity can be less of an opportunity for gawking and more of a chance to applaud those who spin out, but decide to keep aiming for the checkered flag. 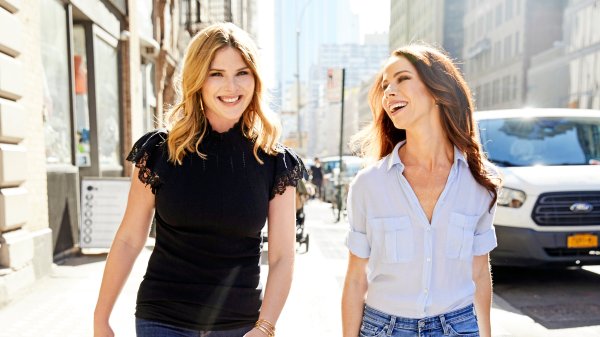 The Bush Sisters on Growing Up as Twins in the White House
Next Up: Editor's Pick