Tis the season of the political memoir, even for those who avoided last year’s election glare. Barbara Bush and Jenna Bush Hager are the latest to jump on the bandwagon with Sisters First, a book that couldn’t be called a tell-all — it’s revealing, not shocking — but that breaks genre with their Republican dynasty.

In alternating chapters, the former First Daughters recount stories about everything from their childhood in Midland, Texas (with visits to their presidential grandfather), through their father’s White House years, to Jenna’s current career as a Today show correspondent and Barbara’s work as CEO and co-founder of the nonprofit Global Health Corps. There are plenty of divergences from their conservative forebears along the way.

Barbara, already well on the record for marriage equality, voted for Hillary Clinton in 2016. Jenna wrote to Michelle Obama asking for advice on how to talk to her two daughters after Trump’s victory. The election was what prompted them to write the book, says Jenna, as a way of celebrating sisterhood.

“If women everywhere had this, felt this empowerment — whether it’s through a sibling or a friend or a colleague or whatever it is — maybe we’d be in a place where we felt better about the state of women in our country,” Jenna says.

Unique among all First Children, Jenna and Barbara are the only twins — and they think that has made all the difference. “Having a twin meant that we had a partner going through everything at the same time as we were, whether that was going to school on the first day or going to our dad’s inauguration,” says Barbara. “I think to have a partner that’s your same age, not someone that is more mature and has a different view of the world than you, but someone that’s experiencing the world in the same age and the same way as you, has been tremendously lucky.”

The sisters are reticent to discuss their father’s choices as president — his decisions “will ultimately be judged by history,” Jenna writes in the book, and they say their role was to support, not to judge. They don’t shy away from teasing him, though: While he was president, they saw a bumper sticker that said “Somewhere in Texas a village is missing its idiot.” Though it stung at first, the whole family eventually embraced it as a comic catchphrase.

Neither sister can envision a reality in which they would have worked for their father’s administration, as Ivanka Trump has done. Both say they wouldn’t have wanted to, but even if they hadn’t been too young, “I think regardless, Dad probably wouldn’t have us work in the White House,” says Jenna.

Courtesy of the Bush Family

And anyway, the White House belongs to their youth. On a visit to their grandparents at age seven, their older cousins convinced Jenna that maxi-pads were meant to be stuck under her arms to absorb sweat. On a dare, she tried some on for size and descended the stairs to greet the grown-ups, including the then-paramount leader of China Deng Xiaoping and a coterie of photographers. “Luckily for me,” she writes, “the cameramen must have realized there are some photos that are just too awful to take.” In 2006, Barbara visited Italy for the Olympic Games and ended up at lunch with Silvio Berlusconi, who told her, “If I was younger, I’d have children with you,” she recalls. “A few sentences after that, the female translator stopped translating.”

Being First Daughters brought a series of challenges for the sisters. They were in their first semester of college — Jenna at the University of Texas at Austin, Barbara at Yale University — during the election and recount. “Emotionally, I was unprepared,” Barbara writes in the book. “The students living in the dorm across from mine had Al Gore signs in all their windows. I couldn’t look out my window without seeing one. The only way to avoid them was to stare at the ground. I knew the signs were not personal, but it still felt like a stab each time I saw one.” Later in her time at Yale, a teaching assistant offered to give her a better grade if she convinced her father not to go to war in Iraq. “That was definitely the most surprising thing that happened,” she says. “Both the idea that she thought that I would be able to change the opinion of, truly, the Congress and the U. S., and you think your professors and TAs would be above that.”

To watch PeopleTV’s full interview with Jenna Bush Hager and Barbara Bush, go to PeopleTV.com or download the PeopleTV app on your favorite mobile or connected TV device.

Local and campus culture skewed more to the right at UT Austin, though “being a Republican’s daughter on any college campus isn’t sunshine and rainbows all the time,” says Jenna. She became tabloid fodder over typical college-kid hijinx, but after one incident prompted Jenna to call her father to apologize, he cut her off: “No, I’m sorry,” he said. “We promised you normalcy, and this is not normal.”

Courtesy of the Bush Family

The Bushes have been protective of normalcy for the two first daughters who followed them. Just before Trump’s inauguration, they wrote an open letter to Malia and Sasha Obama (published in TIME) wishing them luck in the next chapter of their lives. “It was a little bit of a battle cry,” Jenna says. “It was like, ‘Don’t mess with them!’” The sentiment extends to 11-year-old Baron Trump. “I hope that people will give him the kindness that they would give their own little brothers or their own children,” Jenna says. “Because he didn’t ask his dad to run for president. So we’re protective of him just as we were Malia and Sasha.”

At other more private moments in the book, the sisters and their family are at their most intriguing and unfamiliar. Jenna shares an anecdote of their paternal grandmother, Barbara, writing a chastising letter about Jenna’s unsportsmanlike behavior at a family tennis tournament. And Jenna gets very personal about the distance she felt from her mother when she was young: “My mother was a librarian and an only child — a combination that sometimes made it hard to relate to her point of view,” she writes in the book. “When I was little, I was a daddy’s girl. I didn’t always understand my mom; more precisely, I didn’t think she got me. We were too young and immature to consider how much my mother had wanted and wished for siblings of her own, to see how the bond between Barbara and me might have made her feel like an outsider.” Now Jenna and her mother are very close, and co-authors of two children’s books.

George W. Bush is depicted as a never-bumbling source of strength, as when Barbara went through a break-up and he checked in with her every day. Or when Jenna made a gaffe on-air during the 2017 Golden Globe awards, mashing up the African-American-lead films Hidden Figures and Fences to say “Hidden Fences.” She woke up to a text from her father: “I hear the twitter world is buzzing because of something you said. Here are some thoughts. It is no big deal. Your family loves you which is a lot more important than one slip. I made a lot of slips and overall they did not matter. The world is full of people who want to take someone down but there are many more people who think you are great. So let it go. Be your charming natural self. All will be well.”

There is one story, more than any other, that seems especially painful to tell. When Barbara was in high school, she was rocked by the suicide of her boyfriend, Kyle — “It was early days” for the relationship, she says, on the verge of tears. “Which is kind of the heartbreaking part of it, too. In high school you sort of think, ‘What if, what if, what if?’” She was was alarmed when someone told her that Catholics didn’t believe you went to heaven if you committed suicide. “I am superstitious,” she writes in the book. “Until I was 34, every wish that I ever made, on the flame of a birthday candle or on a star, was a wish that Kyle would go to heaven.” Last year, she saw a healer and brought a photo of Kyle. “I didn’t say anything, I didn’t even tell her my name, I just showed the woman the photo. She looked at it and matter-of-factly said he had hanged himself in his closet. I started to cry, after all those years, in a recognition of having carried those memories for so long. She told me, ‘He has followed you everywhere, and he’s so proud of all that you’ve done. You’ve been all over the world and he’s gotten to go on this journey with you.’ Then she said, ‘He says you can stop counting stars now.’” She had never told anyone about her wishes, but after this encounter, she told her sister.

That Barbara was going through this as she and her family were on constant display is all the more heartbreaking — and eye-opening. What is happening in the deep heart’s core of Tiffany, Barron or Ivanka Trump? What stories will the Obama sisters tell when they are ready to step onto a new kind of stage? “We’re now in a society where it’s so easy to stereotype people and to create headlines via social media,” Jenna says. “I think it’s really important to get to know everyone’s nuances and to have friends or siblings, like I have in my sister, see every side of me, the good and the bad and the part the nobody else sees, and lift that up.” 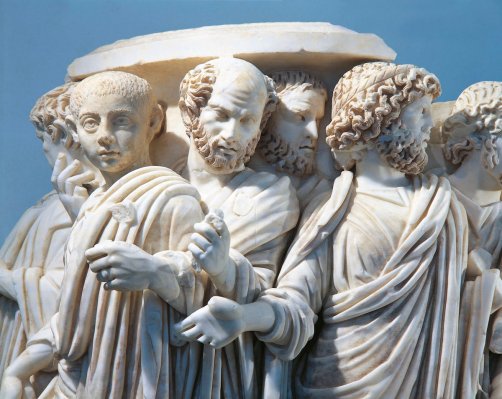 Is This Our Moment of Decline? Lessons From Rome Before the Fall
Next Up: Editor's Pick