'My Voice Is Something Special': Soprano He Hui Blazes a Trail for China's Opera Singers

It’s just past 10 am, but even the eastern glare off Victoria Harbor can’t uncover a smudge in He Hui’s filigree eyeliner. The Chinese soprano commanded the chambers of Hong Kong’s Cultural Centre late last night as Aida—for singers, a three-hour marathon of the lungs and diaphragm—and yet she still greets you with a warm ciao, feathery, clip-bound tresses and the diva’s abhorrence of pop music.

“La tortura!” she exclaims, brandishing her fists with a bom bom bom. She laughs, and you can hear the elasticity of her vocal cords—the suppleness of a slingshot ready to lob a High C into the dress circle at any moment.

Opera powers He’s orrery, so her time in Hong Kong, like every other city in which she performs, is fleeting. She’ll depart tonight on a flight back to Verona, Italy, swap suitcases, and then glide in fabulous orbit to New York City, where she’ll swap Giuseppe Verdi’s heroine for Giacomo Puccini’s Cio-Cio San to open Madama Butterfly at The Metropolitan Opera on Nov. 2. She loves New York but also responds deeply to the Asian Manhattan—to Hong Kong’s entrepôt culture and it’s mercantile mix of Orient and Occident.

He Hui’s operatic career is remarkable in its own right. Ever since landing second place in Placido Domingo’s Operalia in 2000, she has performed in every leading theater in the world—from the Vienna Staatsoper to Paris’ Opéra Bastille. Usually starring as Aida or Madama Butterfly, she has sung those roles over 150 times—each.

But she’s not just a soprano. She’s a soprano from China. In 2010, she was the first Chinese soprano to star in Aida at the Met and in 2013, Tosca at La Scala in Milan. And while there certainly have been other successful Asian opera singers, she has been widely praised for her ability to have overcome the nuanced, linguistic barriers of a historically western art form and thrive in the international arena. With the talent and tenacity to transcend cultural differences, He Hui is a trailblazer and a harbinger of the rise of Western opera in the world’s most populous nation.

“She’s part of a new generation of opera singers from China who are very gifted,” Peter Gelb, General Manager of the Metropolitan, tells TIME.

At the same time, He’s is deracinated voice. Ask her where home is, and the 45 year-old will immediately say Xi’an, China—followed by a “but.” There are the 19 years she has spent living and training in Verona, Italy. But then again, she only spends two, maybe three months a year at her apartment there. It is little more than a home base between stints at the world’s most prestigious opera houses. Perhaps the stage is her only true home.

“As Butterfly, I have something very soft, a big personality,” she says of her connection to Cio-Cio San. “Also as Aida, I feel this, because Aida is a princess out of her country, and I think I am the Chinese out of China, and I feel this this same way on how to feel about the country.”

Barriers to entry for opera are manifold, but race is not one of them and, these days, race-based casting is a non-issue. Asian singers don’t necessarily play Cio-Cio San, the Japanese protagonist of Madama Butterfly, just as black singers don’t necessarily play Aida, the Egyptian princess of African descent. While preconceptions of Asians having lighter voices still exist, He defies that with a voice that’s proved to be well suited for the heavy roles of Puccini.

“I like to think we are color blind when we are casting,” says Gelb, highlighting the Met’s troupe of several minorities. “We want the best of the best, whether you’re from New York or Beijing.”

Linguistic obstacles remain firmly planted, however. All traditional western operas are sung in some sort of European language, so “you need to conquer the languages. You have to master them,” says Warren Mok, acclaimed tenor and founder of Opera Hong Kong. “When you see a non-European auditioning on the stage, first thing they criticize is your language, then your diction, then your voice. You have to work double.”

Nearly two decades of Italian training distinguishes He’s career. After her math teacher discovered her voice in high school—a moment He describes as in fiamme, the fire of her life—she moved to Verona. Italians are notorious for booing singers off stage, but she mastered their language well enough to land the lead in Puccini’s Tosca at the Teatro Regio di Parma in 2002.

“She’s like an idol for young singers,” says Mok of aspiring Chinese vocalists. “She made it.”

China has produced many great singers, “with voices kissed by God,” explains says Ken Smith, columnist for Opera China magazine and the Asian performing arts critic of the Financial Times. But historically, “What they haven’t excelled in is the repertory. It’s sometimes painfully obvious that they don’t conversationally speak the language they’re singing, or even understand the dramatic subtleties of what they’re supposed to be doing.”

China’s lack of exposure to essential operatic languages or stagecraft is a byproduct of the Cultural Revolution. Until China opened up in 1976, any influences that strayed from Communist ideology were smothered out. Western opera in China was virtually nonexistent.

But now that’s all changing. He Hui and her generation dovetail with China’s reawakening to the art form. Retirees dominate the audience of operas in the west. But in China, where few were exposed to opera until the 70’s and 80’s, audiences consists of affluent 35-45 year-olds. Opera houses are opening up all over the country, with western directors and singers frequently invited to put on shows. According to Opera China magazine’s 2016 figures, there were 81 opera productions across China, 41 of which were western. Since the 2008 opening of the National Center for Performing Acts in Beijing (NCPA), China’s most prestigious opera house has put on 53 productions, 40 of which were western, averaging about 6 annually.

“You have to feed the mouth first. Then you think about culture,” says Mok. “That’s exactly what’s happening in China.”

Of course, even facing the idiomatic and cultural hurdles requires landing the most important: talent and endurance. Opera is more than just an art. It’s a sport. “Opera singers are vocal athletes,” explains Gelb. “They have to use their entire body to produce the sound that come out of their mouths.” There are no microphones in opera, so it takes enormous amounts of physical stamina and unwavering concentration to fill a theater with your voice for several hours at a time—not to mention the drama the roles entail.

“I think there are many people who are like how I was initially, not knowing the meaning of the opera, or Italian,” says He. “In the future in China, I believe there will be more and more people who walk the path I’ve walked, standing on international stages.”

Despite what her passport stamps say, He’s heart is in her birthplace. Her parents are getting older—her father is 87 years-old and mother is 78—so she visits as often she can. Just before her trip to Hong Kong, she spent three weeks in Xi’an with them. Otherwise, they FaceTime everyday, she cooks spicy food often, and everytime she sings Aida’s “O Patria Mia,” she thinks of China. 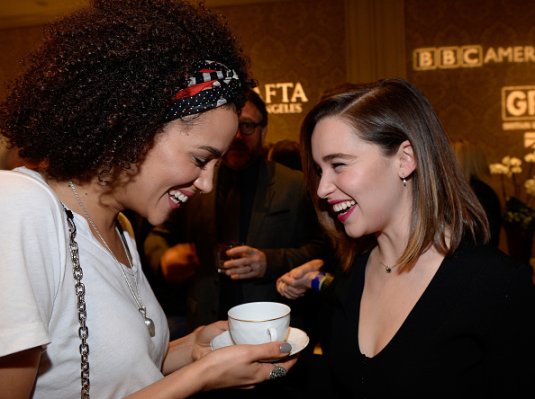 Game of Thrones' Missandei Gave Mother of Dragons Emilia Clarke a Fiery Birthday Shout Out
Next Up: Editor's Pick