China Is Creating a Database of Its Citizens' Voices to Boost its Surveillance Capability: Report

The Chinese government has collected tens of thousands of “voice pattern” samples from targeted citizens and is inputting them into a national voice biometric database, according to a Human Rights Watch report published Monday.

The idea is that an automated system, thought to still be in development, will use the database to pick out individual voices in telephone and other conversations, boosting the government’s already expansive surveillance capabilities.

The system is reportedly being developed by a Chinese voice recognition and artificial intelligence specialist called iFlytech. It adds another spoke to existing biometric information like fingerprints and DNA samples, as well as identification numbers and other personal details.

How long has China been collecting voice data?

Biometric records are a common tool of law enforcement worldwide and some countries, like Japan, even fingerprint foreigners on entry — ostensibly as an anti-terrorism measure. In China, the DNA of some 40 million people, and over one billion faces, are already logged on police databases.

Compared to that, mass scale biometric voice recognition is in its infancy. China’s Ministry of Public Security started piloting the database in 2012 and scaled the program up in 2014. HRW does not give current numbers but by 2015, it says, police had collected 70,000 voice patterns in one of the project’s pilot provinces. In 2016, HRW tracked purchases of voice recognition systems in several other provinces, included in Xinjiang, a restive region with 11 million ethnic minority Uighurs.

Why does China say it needs to collect people’s voices?

Chinese police are allowed to collect voice patterns and other biometric data from anyone suspected of “violating the law or committing crimes.” But HRW says that through 2017 there were multiple instances of police collecting voice samples from ordinary citizens, including at least one instance in which applicants for passports in Xinjiang were required to submit a voice sample. No publicly available official policy documents outline why this is necessary, according to HRW.

Government reports in the media claim that voice recognition software has helped to solve fraud, drug trafficking, kidnapping, and blackmail cases. These reports also state that such systems will serve a counterterrorism function and say they will also be applied for “stability maintenance” purposes.

Why are human rights groups concerned?

For one thing, the terms counterterrorism and “stability maintenance” have broad scope in China and authorities have in the past used them to justify quashing political dissent

For another, it’s unclear who can be targeted for voice sampling and how the samples will be used. “Authorities can easily misuse that data in a country with a long history of unchecked surveillance and retaliation against critics,” Sophie Richardson, HRW’s China director says.

Beijing’s growing surveillance capability coincides with a broader clamp down on dissent. China openly tracks the movements of dissidents, has installed CCTV cameras outside activists’ houses, jailed people who criticize the government on social media, and cracked down on VPN‘s that allow unfettered access to the internet. It has even banned Winnie the Pooh. 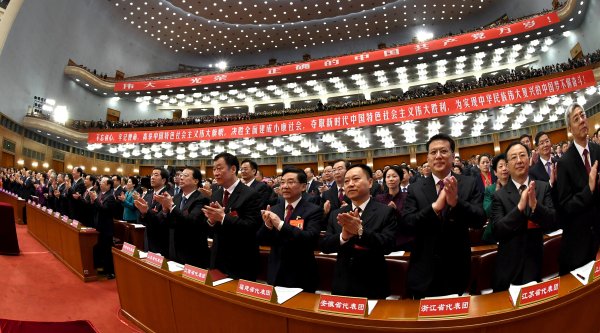 Love Xi Jinping? There's an App for That
Next Up: Editor's Pick