Senate Republicans Finally Got Something Done. They Should Thank Steve Bannon

After nine months of setbacks, stumbles and outright failures, Senate Republicans made good on at least one big campaign promise.

In a vote late Thursday, the Senate passed a budget resolution and set the stage for tax cuts to be tacked onto it. The proposal drew unified Democratic opposition—along with GOP Sen. Rand Paul of Kentucky, who thought the budget’s $1.5 trillion in red ink was too much—and heads next to the House, where its odds look promising.

An announcement from the far-right Freedom Caucus later in the day was expected to signal cross-party support for the budget resolution. Instead of trying to split the difference between the House and Senate versions, it’s likely that the House will simply sign-off on the Senate version. That shortens the timeline for the ambitious tax overhaul by several weeks. “Did we finally get something right?” one self-aware Senate GOP aide said.

Republican advisers on both sides of Capitol Hill were working the phones Friday afternoon to donors, hoping the moves late Thursday would restore confidence in the party’s ability to move its agenda. Fundraisers in recent weeks had faced a revolt from their patrons, many of whom are losing patience with the party’s leaders and sense a souring mood among the party’s grassroots.

Spooked at the threat facing incumbents, several big donors had entertained the ideas planted by former Trump strategist Steve Bannon. The Bannon mold of throwing the bums out seemed appealing—and perhaps inevitable had the GOP gone home at the end of the year with nothing to show. Without delivering on the promise to cut taxes, the GOP’s leading lawmakers feared they were handing Bannon ammo as he prepared a slate of rabble-rousing challengers.

In that sense, the threat from Bannon helped rally on-the-fence lawmakers around the budget proposal. Some, like Sen. John McCain of Arizona, were no fans of its details, but they also recognized failure would spell disaster for the party during next year’s elections. “They bit the bullet,” said one fundraiser for a conservative group. “They didn’t love it, but they knew the alternative was worse.”

Senate Republicans also caught a break from their colleagues in the House. The House-passed budget blueprint called for $200 billion in cuts. But the bet, especially among Establishment-minded Republicans in the House, is that the promise of tax cuts trumps wariness of deficit spending. GOP lawmakers know they need to do something—details be damned—before the 2018 election season begins in earnest.

At the White House, officials were also feeling like they had finally caught a break. A major piece of legislation—tax cuts would likely be the cornerstone of many GOP lawmakers’ campaigns next year, as well as President Donald Trump’s re-election bid in 2020—seemed within striking distance. But even as officials were calling members of the Senate to thank them for their work and phoning House lawmakers to make sure there were no surprises, they looked at Twitter to see the President was back sending messages insulting a Democratic lawmaker. Why, the President’s own advisers asked each other, couldn’t the boss just soak up the victory?

And that is why Republicans continue, even in partial victory on a budget, to fret. Trump has a knack for stepping on his own wins. Republicans control the House, the Senate and the presidency, yet have consistently stepped on their own shoelaces. The conservative agenda ran into a brick wall of the GOP’s own making. Even last week, as the budget was coming together and odds were looking up for the administration, many of the top aides throughout government bemoaned the President was his own biggest hurdle to getting taxes done. 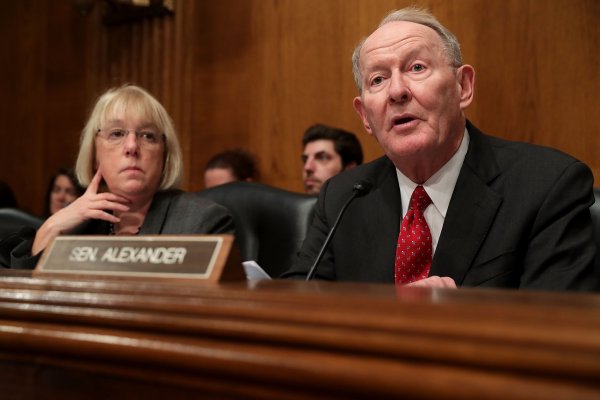 Senate Moves Ahead With Health Care Deal
Next Up: Editor's Pick